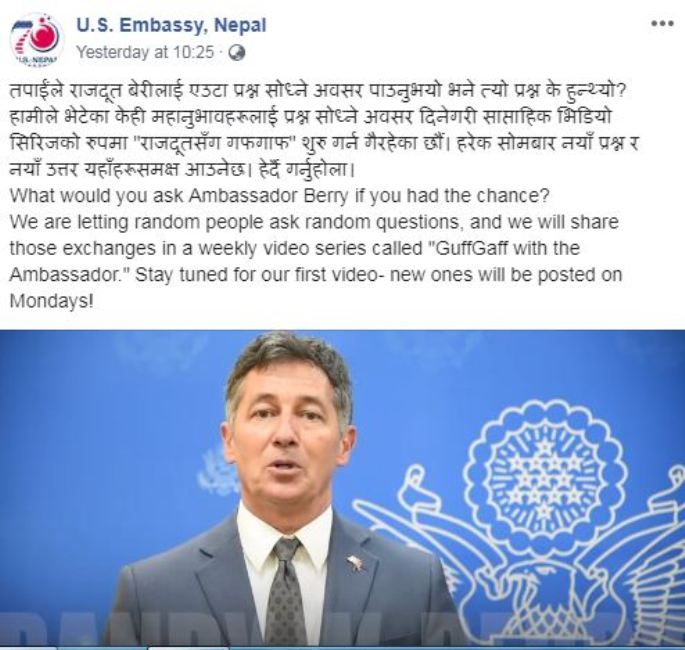 KATHMANDU, May 22: The Ministry of Foreign Affairs on Wednesday said that its attention was drawn to the United States Ambassador to Nepal Randy Berry’s announcement to hold public interaction on social media.

Talking to Republica Online, Foreign Secretary Shanker Das Bairagi said that the ministry’s attention was drawn to the US ambassador’s planned social media interaction with the public.

Indicating that the US Embassy in Nepal had not taken prior consent with the ministry before making an announcement on the program, Secretary Bairagi said that the ministry will ask the embassy on the matter.

“Generally, ambassadors are not supposed to hold such events without prior approval of the host governments in existing diplomatic practices,” he added.

Ambassador Berry’s planned interaction on social media has got mixed reaction from Nepalis. Ambassador Berry shared the idea on Twitter and Facebook on Monday.

The program titled ‘Rajdut Sanga Guff Gaff (chit chat with ambassador)’ is planned for every Monday, according to the embassy. This will be a weekly interaction with the Embassy’s four million followers on various social media platforms.

Soon after the ambassador posted his plan through a video on Twitter and Facebook page, people from various walks of life have been commenting about the interaction program. Some of the Twitter and Facebook users have termed it undiplomatic while some have perceived it as a tool to promote public diplomacy.

Former Chief of Protocol of the Ministry of Foreign Affairs Gopal Thapa commented that the US ambassador’s planned public interaction on social media is against the diplomatic norms prescribed by the Vienna Convention.

Another former Chief of Protocol of the Ministry of Foreign Affairs Rambhakta Thakur said that the US ambassador should be advised not to hold public interaction on social media, calling it undesirable and undiplomatic.

KATHMANDU, May 23: Notwithstanding the criticisms from various quarters and objection from Ministry of Foreign Affairs (MoFA), US Embassy in... Read More...