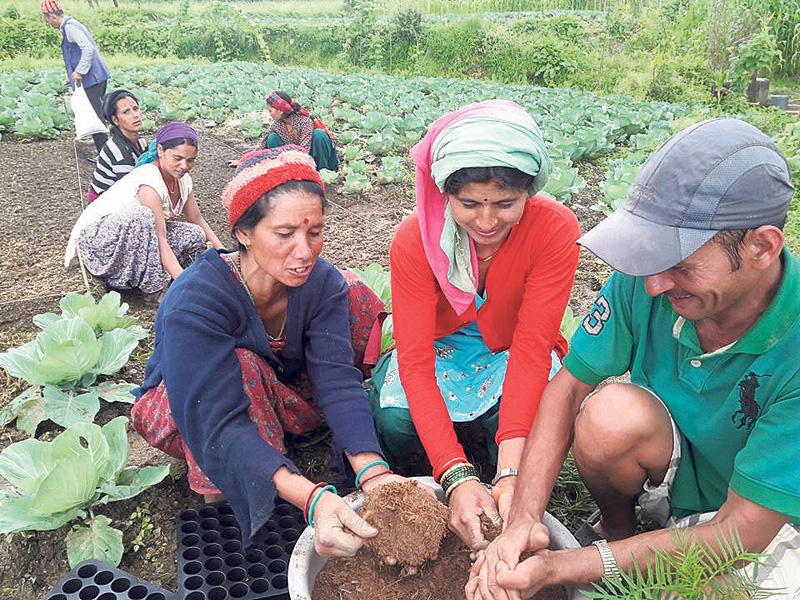 DOTI, Dec 10: Harina Khatri of Hirapura village used to feel that the six ropanis of land she had was simply not sufficient to grow enough crops to feed her family.

Even after 'making the best use of the land' by altering with seasonal crops like rice, maize or millet, she was facing difficulty in managing food stock. “The land would provide us food just for three months in a year. For the rest of the year, we needed to earn money to buy food,” she reminisced.

Today, things are no more the same. Not that the area of her land has increased, but a new approach to farming has given the family exciting results. Khatri is now focused on vegetable farming and that too, by using modern technology. Her husband Krishna Bahadur Khatri helps her equally devotedly.

“Now, when I look back, I just feel we should have learnt it much before. Not just us, even those who had plenty of land used to struggle to produce sufficient crops because we all lacked proper knowledge on farming,” Khatri said. “Now, I feel, the same land is quite adequate. It's never less,” she added.

“Technology does wonders. Every farmer must learn it,” stresses Khatri, who had taken formal training on modern farming last year. The organization which taught her the skills had also handed over few necessary tools to switch to the new technology.

“They provided me poly house, modern seeds and tools for irrigation. During the training, they told me how to go ahead with it,” said Khatri, adding, “I started with the new style of vegetable farming in two ropanis of land in the beginning.”

In the beginning, Khatri planted cauliflower, tomato and green leaves. A popular market Garabazar was nearby. She used to take her fresh vegetables to the market. “In the very first lot, my earning was Rs 60,000,” an elated Khatri said.

Indeed, she had a reason to be happy. When she was growing traditional crops for so many years, earning such huge amount at once was simply impossible. Now, 'money is not a big deal' for her.

“I had earned such big amount of Rs 60,000 just in three months. By working for three months, getting that much of profit is not a small thing for people in this area. So, we are really very happy,” Kharti said.

Khatri did not have words to explain how important technology was. She reiterated that many farmers like her are still losing a lot due to lack of modern farming skills. “I have regrets that this technology did not come my way earlier. And I wish all farmers could make maximum profit from their efforts,” she said.

Khatri recalls the days when villagers including herself had to toil hard for little harvest. “But yet, that would not give us enough to eat even for half a year. We would starve the rest of the year except for around three months,” she recalled.

Dambari Devi Mahat has a similar story to share. Modern farming technologies have brought about the same kind of economic empowerment in her life. “I was already into vegetable farming even before. I used to grow potatoes, tomatoes and other types of vegetables. However, I lacked modern skills on farming,” she said. Mahat added that in lack of modern technology, her vegetables would not grow well. “But the use of new technology is amazing,” she exclaimed, adding that the vegetables she sells in the market now give her very good return. “Vegetables in poly houses grow safely and are very healthy. You can sell them in good price in the market.”

Twenty women of the village are now aggressively into modern vegetable farming. And they are full of praise for the new thing they have learnt. Mahat stated that the women not only cover household expenses but are also making good savings. “We are in a position to make savings. All this is due to modern vegetable farming,” she said. The government-run Rural Development Service Center has been providing necessary training and tools to encourage women of rural areas for modern farming.

Women's economic and social prestige should be enhanced: President Bhandari