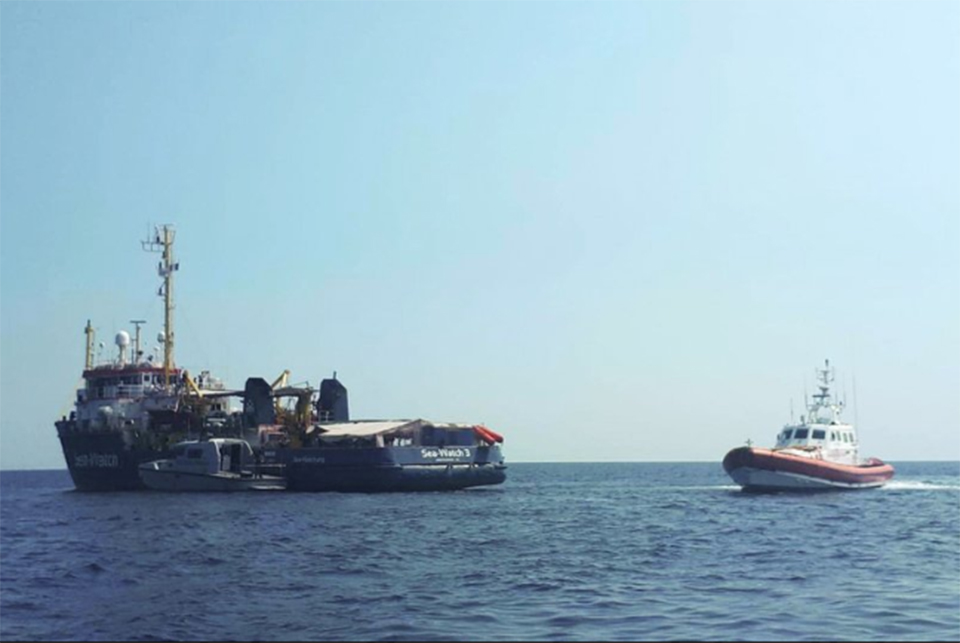 An Italian Coast Guard boat patrols next to the Sea-Watch 3 vessel, in the Mediterranean Sea just off the coasts of the southern Italian island of Lampedusa, Thursday, June 27, 2019. Carola Rackete, the captain of the humanitarian rescue ship said that Italian law enforcement officials have told them that a resolution is near for 42 migrants rescued at sea that Italy’s populist government has so far refused to allow to disembark. (ANSA/Matteo Guidelli via AP

LAMPEDUSA, June 29: Forty migrants stepped onto Italian soil Saturday after the defiant captain of the German humanitarian ship which had rescued them some two weeks earlier docked without permission at a tiny Mediterranean island, ramming an Italian border police motorboat blocking its way. The aid ship’s captain was detained.

Italy’s anti-migrant interior minister, Matteo Salvini, had refused to let the migrants disembark on Lampedusa island until other European Union countries agreed to take in the asylum-seekers.

Joyously, the migrants hugged the crew and kissed the dock upon arrival, after 17 days at sea.

After five countries offered on Friday to take in the migrants, but still without any disembarkation permission, the Dutch-flagged Sea-Watch 3′s captain, Carola Rackete, steered her rescue vessel toward Lampedusa’s dock before dawn Saturday, hitting the much smaller motorboat from the border protection force.

She was immediately taken into custody.

“I have asked for the arrest of an outlaw who put at risk” the lives of the border police on the motorboat, Salvini told RAI state radio. He added that he also asked authorities to sequester the ship, “which goes around the Mediterranean breaking laws.”

The German humanitarian group Sea-Watch rescued 53 people from an unseaworthy boat launched by Libya-based traffickers on June 12. In recent days, 13 migrants were taken off Sea-Watch 3 for medical reasons and brought to Italy for treatment.

Sea-Watch defended the captain’s actions, as did Italian opposition lawmakers who had gone aboard a few days earlier in a show of solidarity to the migrants.

“She enforced the rights of the rescued people to be disembarked to a place of safety,” Sea-Watch said in a statement.

Democratic Party lawmaker Graziano Delrio told reporters after disembarking that Italian judicial authorities will ultimately decide if Rackete broke the law. He likened her actions to that of a driver of a Red Cross ambulance “which goes through a red light” to speed ailing patients to a hospital.

As Salvini has done since Italy’s populist government took office a year ago, he had insisted that no migrant disembark in Italy from a humanitarian rescue ship until other EU countries pledge to accept the migrants while their asylum requests are processed.

MEXICO CITY, June 26: The man and his 23-month-old daughter lay face down in shallow water along the bank of the... Read More...

TRIPOLI, July 23: As tensions over the migration policy inside the EU continue to escalate, the bloc has been attempting... Read More...

PHOTOS: A school in Kageshwori Manohara Municipality resumes classes after seven months of shut down
11 hours ago