Mexico hit by one of biggest quakes ever, 15 killed 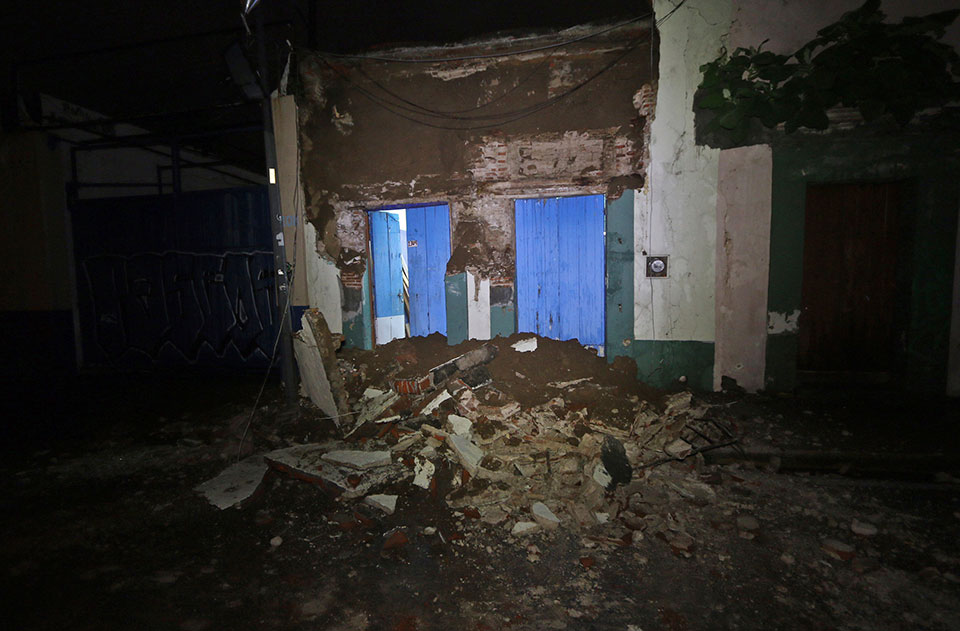 MEXICO CITY, Sept 8:  One of the most powerful earthquakes ever to strike Mexico has hit off its southern Pacific coast, killing at least 15 people, toppling houses and businesses and sending panicked people into the streets more than 650 miles (1,000 kilometers) away.

The U.S. Geological Survey said the earthquake hit off Chiapas state near the Guatemalan border with a magnitude of 8.1 — slightly stronger than the magnitude 8 quake of 1985 that killed thousands and devastated large parts of Mexico City.

National civil defense chief Luis Felipe Puente told the Televisa network that at least 15 people had died, 10 of them in Oaxaca, also close to the epicenter.

Hundreds of buildings collapsed or were damage, power was cut at least briefly to more than 1.8 million people and authorities closed schools Friday in at least 11 states to check them for safety.

"The house moved like chewing gum and the light and internet went out momentarily," said Rodrigo Soberanes, who lives near the Chiapas state city of San Cristobal de las Casas.

The U.S. Geological Survey recorded at least 20 aftershocks of magnitude 4.0 or greater within about five hours after the main shake, and the president warned that a major aftershock as large as magnitude 7.2 could occur.

The quake caused buildings to sway violently in Mexico's capital more than 650 miles (1,000 kilometers) away. As beds banged against walls, people still wearing pajamas fled into the streets, gathering in frightened groups.

Chiapas Gov. Manuel Velasco said that three people were killed in San Cristobal, including two women who died when a house and a wall collapsed. He called on people living near the coast to leave their houses as a protective measure.

"There is damage to hospitals that have lost energy," he said. "Homes, schools and hospitals have been damaged."

Tabasco Gov. Arturo Nunez said two children had died in his Gulf coast state. One of them was killed when a wall collapsed, and the other was a baby who died in a children's hospital that lost electricity, cutting off the infant's ventilator.

The Pacific Tsunami Warning Center said waves of one meter (3.3 feet) above the tide level were measured off Salina Cruz, Mexico. Smaller tsunami waves were observed on the coast or measured by ocean gauges in several other places. The center's forecast said Ecuador, El Salvador and Guatemala could see waves of a meter or less. No threat was posed to Hawaii and the western and South Pacific.

Mexican authorities said they were evacuating some residents of coastal Tonala and Puerto Madero because of the warning.

The quake hit as Mexican emergency agencies were bracing for another crisis on the other side of the country. The U.S. National Hurricane Center said Hurricane Katia was likely to strike the Gulf coast in the state of Veracruz early Saturday as a Category 2 storm that could bring life-threatening floods.

In neighboring Guatemala, President Jimmy Morales spoke on national television to call for calm while emergency crews checked for damage.

"We have reports of some damage and the death of one person, even though we still don't have details," Morales said. He said the unconfirmed death occurred in San Marcos state near the border with Mexico.

The quake occurred in a very seismically active region near the point of collision between three tectonic plates, the Cocos, the Caribbean and the North American.

Mexico's National Seismological Service said the area has seen at least six other quakes of magnitude 7.0 or greater since 1900 — though three of those all occurred within a nerve-wracking nine-month span in 1902-1903.

A study by Mexico's National Seismological Service said that quake is believed to have killed about 400 people, causing severe damage around the port of Manzanillo. A powerful aftershock that hit 19 days later caused a tsunami that devastated 15 miles 25 kilometers of coastline, killing 75 people.

Motorcyclist killed after being hit by tipper

JHAPA, June 25: A motorcyclist was killed  after a tipper, Ba 1 Kha 6581, struck his motorcycle at Bensichowk of Buddha... Read More...

Minor killed after being hit by vehicle in Bhaktapur

BHAKTAPUR, May 3: A minor has been killed after being hit by a vehicle at Jhaukhel in Changunarayan Muncipality on... Read More...

Teenager scooter rider killed after being hit by van

RATNAGAR, April 22:  A 19-year-old woman, who was critically injured in a van-hit incident in Narayangadh at Chitwan district on Saturday... Read More...