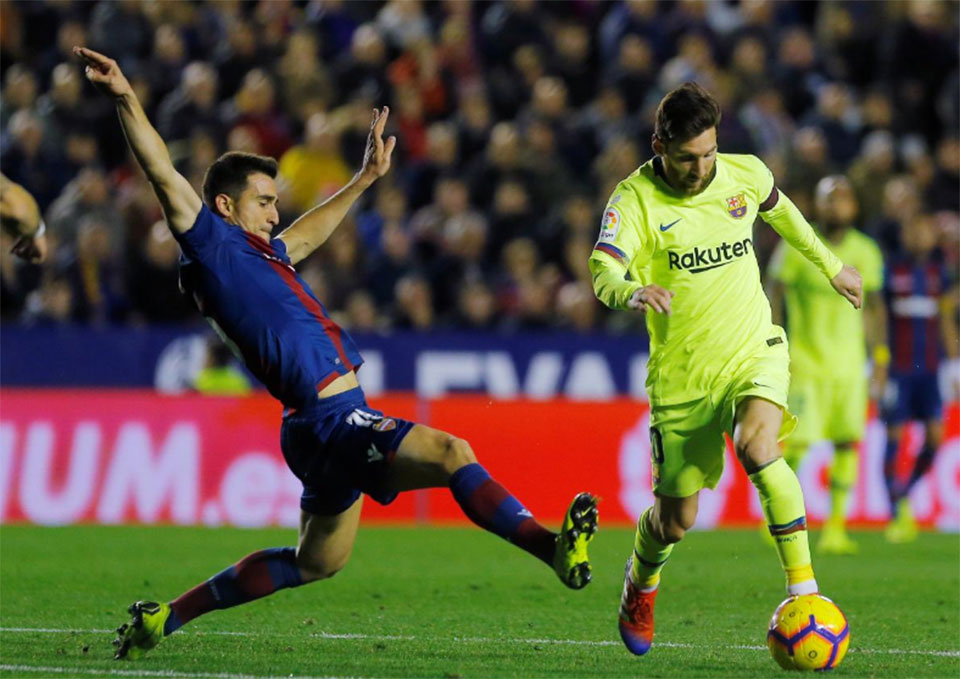 VALENCIA, Dec 17: Lionel Messi netted his first hat-trick of the La Liga season and provided two assists in yet another sensational individual display as a rampant Barcelona won 5-0 at Levante to strengthen their lead at the top of the table on Sunday.

“Suarez and Messi are the best striking partnership in the world. Luis has goals in his veins — and everything has already been said about Leo,” said defender Pique, paying tribute to Barca’s prolific South American double act.

Argentine Messi, who on Monday will collect for a record fifth time the Golden Shoe trophy that is awarded annually to the leading marksman in the top divisions of Europe’s soccer leagues, looks on a mission to repeat his 2017-18 success.

His treble took him to 14 league goals for the season, two more than any other striker in Europe’s ‘big five’ leagues.

His masterclass began as he carved his way through the home side’s defence before producing an outrageous no-look pass for Suarez to open the scoring in the 35th minute, shortly after mid-table Levante had hit the underside of the crossbar.

Messi struck his first goal of the night two minutes before the interval, latching on to a defence-splitting pass from Sergio Busquets and racing clear to knock the ball through the legs of Levante’s goalkeeper with his weaker right foot.

The Barca captain, following up his two mesmeric goals from free kicks against Espanyol last week, seemed intent on making further mockery of his recent fifth-place ranking in the Ballon d’Or voting by striking again soon after the interval.

He dispatched Jordi Alba’s low cross into the bottom corner with a first-time finish, before going on to complete his treble on the hour mark from close range.

Not yet sated, he then laid on the 88th minute pass for Pique to complete the rout which took leaders Barca on to 34 points after 16 games, three points clear of both second-placed Sevilla and Atletico Madrid, in third.

Levante were the only team to beat Barca in the league last season, stunning them at the Ciutat de Valencia stadium with a 5-4 win in the penultimate game of the campaign.

Perhaps with that game in mind, Barca coach Ernesto Valverde lined up with an unorthodox 3-5-2 formation, playing French forward Ousmane Dembele as a right wing back and Jordi Alba on the left.