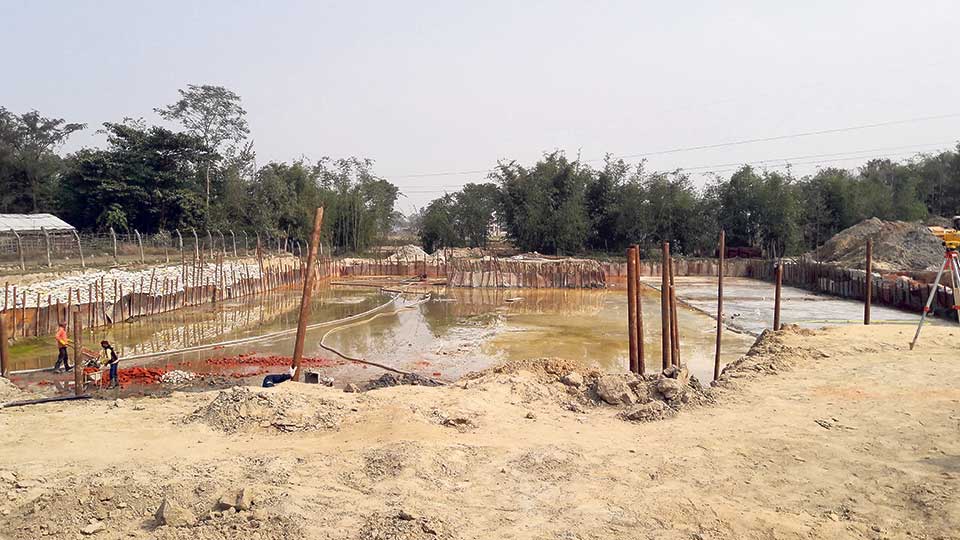 Project site of a conference hall being built in in Damak Municipality of Jhapa. Construction work in the site started a month ago. Photo: Yubaraj Bibas/Republica

DAMAK, Feb 4: Development works of different types worth about Rs 350 billion have kick-started in Jhapa, the home district of CPN-UML chair and would-be prime minister KP Sharma Oli. The projects, termed ‘dream projects’ by Oli during his premiership two years ago, were of a total worth of Rs 500 billion. Apparently aimed at wooing the voters, these projects have been considered to have supported his election campaign significantly.

Most of the investments in those projects come from Chinese companies, including anticipated funding from the Belt and Road Initiative.

Some of the projects are being planned under foreign aid financing. Among the proposed projects, building of world’s tallest statue of Lord Buddha, an industrial park, a conference hall, and a view tower are the prominent ones.

The construction of Lord Buddha statue comes under the plan of connecting Damak city with the world Buddhist circuit.

The industrial park that is being built with Chinese foreign investment, is the largest among those projects, as it is worth Rs 333 billion. The industrial park will spread in a sprawling 2,200 bighas of land in Gauradaha and Kamal municipalities in the districts that fall under election constituency 5 of Jhapa. The work of acquiring land for the project is underway.

A total of 550 bighas of undocumented land, which is often taken as public land, has already been transferred to the ownership of Industrial Area Management Limited (IAML). Chinese officials have already visited the project site and started preparatory works in the district.

Chairman of the IAML Nanda Kishor Basnet said that documents related to acquiring other private lands have already been sent to the concerned ministries, and a committee led by the chief district officer will soon recommend the land prices. IAML has a budget of Rs 330 million for the purpose of giving compensation to the private land owners. Despite the plans to build such a major industrial park in the district, the locals are not much excited about it. For, it has hiked land price in the nearby areas.

Dilli Neupane, a local leader of CPN-UML party, said that they are much hopeful of starting the project works after a site visit by Chinese officials and technicians.

“This may only be a boon for those involved in buying and selling lands,” said Hari Krishna Neupane, a local. “The locals are, however, hopeful of employment opportunities in future if the project materializes.”

District chair of Nepali Congress Dhundi Bhandari said that the project works have not moved ahead as announced during the elections. Chair of Ward 10 of Damak Municipality, Bodharaj Neupane, hoped that works will begin soon.

As many as 100 different types of industries will be established in the industrial park. Damak Municipality has already announced complete tax waiver for the first ten years of the operation of the industries.

Meanwhile, the detailed project report of the world’s tallest Buddha statue has been prepared. Works of acquiring public and private lands for building the 542-feet tall statue at a cost of Rs 15.75 billion is underway. The statue will be built over a sprawling 265 bighas of land. But acquiring forest land for the purpose may take some more time, said Yubaraj Dahal, chief administrative officer of Damak Municipality.

“Some preparatory works for building the statue has already been started and the project’s DPR has also been completed,” said Dahal. A Buddhist university, Buddhist school, and meditation center are also included in the project. It aims at attracting tourists coming to Nepal to visit Lumbini.

Meanwhile, the work of conference hall has proceeded while the design and drawing of view tower has been prepared.  Both of the projects are being implemented by the Ministry of Urban Development. The procurement process for building the view tower is expected to begin in a few weeks.  The estimated cost of the conference hall is Rs 284 million, while the estimated cost of the 20-storied view tower is Rs 1.55 billion “The DPR of the view tower has already been prepared and the foundation stone has also been laid,” added Dahal.

Special unit under PM to facilitate implementation of mega projects

KATHMANDU, May 234: The government has set up a unit at the Office of the Prime Minister and the Council of... Read More...

RASUWA, March 9: After living a displaced life for more than 33 months, a large number of quake victims have headed... Read More...