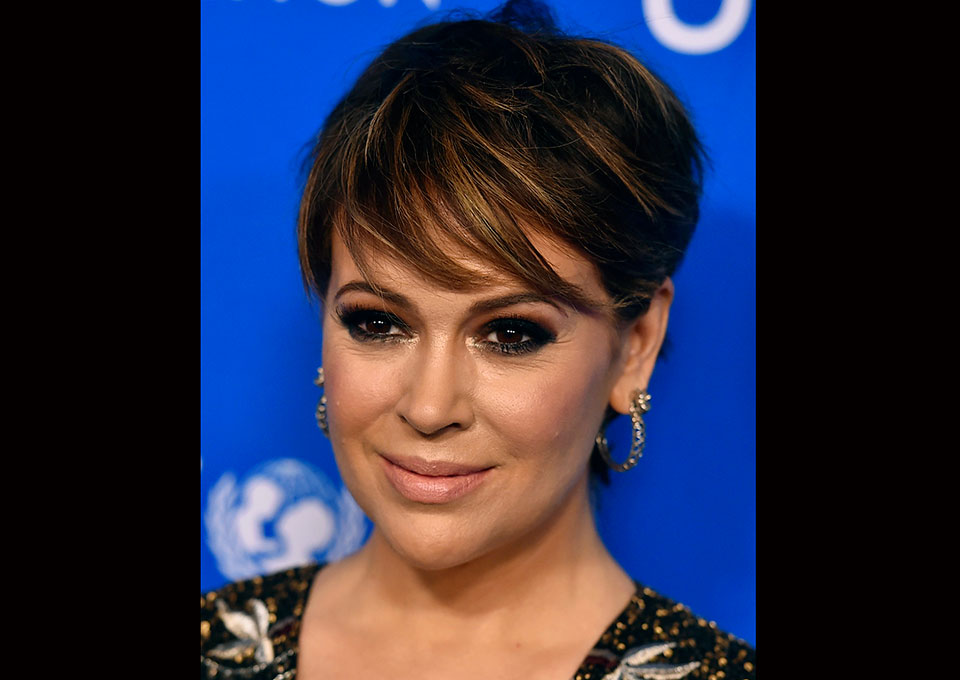 FILE - In this Jan. 12, 2016 file photo, Alyssa Milano arrives at the Sixth Biennial UNICEF Ball in Beverly Hills, Calif. Milano said she was in bed with her two young children Sunday when an idea struck her as a great way to elevate the Harvey Weinstein conversation. She posted to Twitter: "If you’ve been sexually harassed or assaulted write ‘me too’ as a reply to this tweet." By Monday night, 48,000 people had done just that below her tweet, prompting thousands of women to share their stories of rape, sexual assault and harassment across social media. (AP)

NEW YORK, Oct 18:  Alyssa Milano was in bed with her two young children when a friend of a friend on Facebook suggested something that struck her as a great way to elevate the Harvey Weinstein conversation. She took the idea to Twitter, posting: "If you've been sexually harassed or assaulted write 'me too' as a reply to this tweet."

That was Sunday night. By Monday night, more than 53,000 people had left comments and thousands of women had declared "Me Too," sharing their stories of rape, sexual assault and harassment across social media, including some for the first time.

The hashtag was tweeted nearly a million times in 48 hours, according to Twitter. Some left it at, simply: "Me Too," without explanation, and a small contingent of men have posted: "I Have," noting shock at the groundswell and remorse for their own past misdeeds Milano said the idea was to elevate the Harvey Weinstein conversation, placing the emphasis on victims rather than perpetrators and offering a glimpse into the number of women who continue to be victimized. The disgraced film mogul has been accused by more than three dozen women of harassment or abuse.

"My hope is people will get the idea of the magnitude, of just how many people have been affected by this in the world, in our lifetimes, in this country," Milano said in a phone interview with The Associated Press on Monday. "The most important thing that it did was to shift the conversation away from the predator and to the victim."

The posts have gathered steam beyond Twitter. On Facebook, there were more than 12 million posts, comments and reactions in less than 24 hours, by 4.7 million users around the world, according to the company. In the U.S., Facebook said 45 percent of users have had friends who posted "me too."

A similar social media trend emerged in 2014. "Yesallwomen" posts also had women talking about their experiences with sexual harassment and sexism. While Twitter had fewer users in 2014, this hashtag was tweeted 1.2 million times in four days. Additionally, Tarana Burke, a youth activist, started a "Me Too" campaign in 2007 to let other sex abuse survivors know that they were not alone.

Lauren Taylor hopes "Me Too" grows into something more than a passing hashtag. She shared her own story as well.

Growing up in Washington, D.C., she recalled near daily street harassment, from men yelling vile things at out of car windows to boys chasing her as she rode her bike. A longtime women's activist, the 60-year-old Taylor founded a training organization 20 years ago called Defend Yourself, helping women learn "empowerment defense" to ward off physical and emotional attacks in all aspects of their lives.

"The 'Me Too' thing has had a transformative affect that is more complex than people probably thought in the beginning," Taylor said. "Women are disclosing that they've been harassed, attacked or abused, sometimes for the first time, and if it isn't for the first time, it's for the first time this publicly. The sheer number are unbelievable, and a lot of men are saying, 'Really, that many?'"

From New York where she now lives, 30-year-old Texan Aly Tadros added her voice on Facebook.

Evoking "Me Too," she said she was sexually assaulted at 19, by a bar owner years older than she was in her hometown of Laredo. He had money and connections. Despite that, she went straight to the hospital, where police were called. She pressed charges but in the end he struck a plea deal that included court-mandated therapy, probation and a letter of apology.

Tadros, a singer-songwriter, considers herself among the lucky. She had the help of an advocacy organization in navigating the legal system. She could afford counseling. Still, she feared the stigma, choosing to keep the attack under the radar both personally and professionally in the beginning.

"Most survivors don't press charges and I totally understand that, and those that do rarely make it past the grand jury," Tadros said. "But I know I don't have anything to be ashamed of."

Marya Jansen-Gruber, a 47-year-old book editor in Ashland, Oregon, has spoken to people about her rape in the past, but never on social media, where she also joined the "Me Too" movement.

"I think I'm speaking out now because of the current political climate. Now more than ever people around the world, men in particular, need to see what we women have to deal with. They need to see that there is a problem that must not be denied or hidden," she said. "I'm raising a daughter who is going to have to deal with many of the same problems that I face. The situation in this world for women is not improving as much, or as fast, as it should."

Martha Armstrong, 69, in Wilmington, North Carolina, knows that firsthand, speaking out on social media for the first time about a range of assault and harassment spanning decades.

"I was raped by a stranger when I was 20 years of age when I worked and went to college in Atlanta," she said. "That was almost 49 years ago and, at that time, the advice du jour was 'Don't tell anyone!' But I did. I reported it to the police. In addition to raping me, he also stole my driver's license, student ID and the cash I had in my wallet. This happened on a Friday. On Monday, he called me twice at work and I freaked out and broke down. I took a week off work and a month later my boss fired me because I was 'too nervous and jumpy' at work. Plus, I wouldn't sleep with him."

Much of her frustration stems from how little has changed in the details of stories recounted by younger women, she said.

Of her own rape, Armstrong recalls the first thing she was asked by police was "What were you wearing?"

"I was in a pea jacket in my car," she said. "That's still happening. What difference does it make what I'm wearing? Something has to change."

Milano said she has a "Me Too" story as well, but she chose not to share it at this time, hoping to put the focus on others.

"Really what's happening here is giving women the opportunity to come forward without having to go into detail about their stories if they don't want to," she said. "To see the numbers go up minute by minute, I get tears in my eyes thinking about it."

March 2: A golden statue of a bathrobe-clad Harvey Weinstein seated on a couch is on display at a busy... Read More...

Palpa DAO suspends all but essential services
37 minutes ago