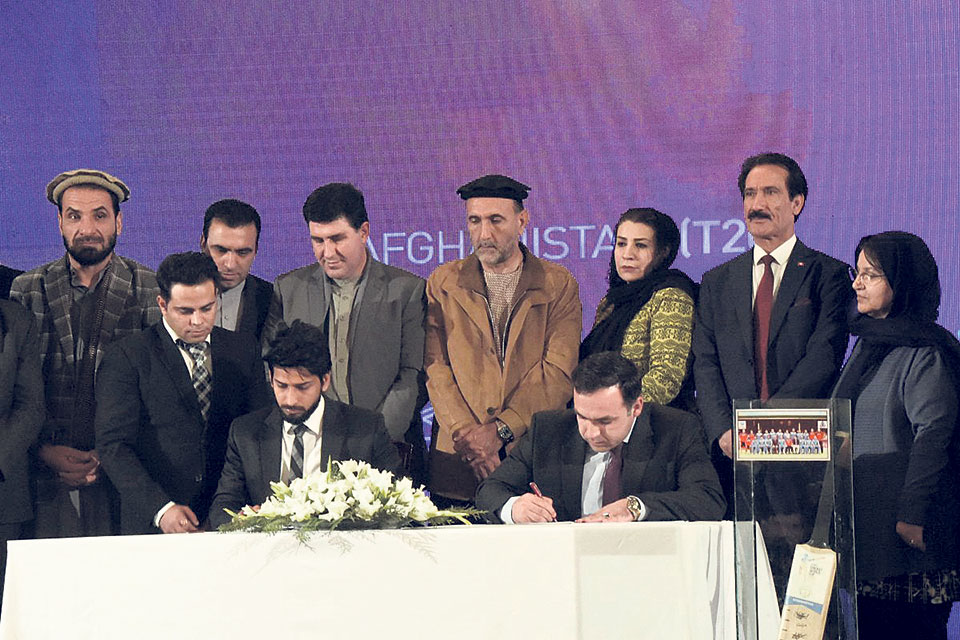 Officials of Afghanistan Cricket Board and Snixer Sports Private Ltd during the MoU signing ceremony at Kabul, Afghanistan on Thursday.

MCC will now focus on visiting, on a repeat basis, countries where the Club can have the most impact with regard to player, coaching and facilities development.

“Countries such as Zimbabwe, Nepal and Germany are believed to present ideal developmental opportunities and could benefit most from the Club’s (MCC) overseas work. MCC will now review its strategy and will work with the ICC to identify where it can best help the world game” stated MCC’s official website.

MCC has visited Nepal three times in past, the most recent being 2015 when they played a two-day game with Nepal XI. The Nepal national team also traveled England and played a 50-over match against the MCC in 2016 at the home of cricket, Lords.

T20 cricket blooming in Nepal
After the immense popularity of T20 leagues like Dhnagadhi Premier League (DPL) and Everest Premier League (EPL), T20 is growing like a mushroom all over Nepal. Here are some T20 leagues that is happening or going to happen in different places of Nepal.

Kathmandu
Khukuri Entertainment group is set to organize the second Khukuri Challenger T20 Cup at the Mulpani Cricket Ground (MCG) and TU cricket ground from January 24 to February 17. Khukhuri management has allowed limited number of current or former Nepali national level cricketers to participate for the respective team or club.

20 teams will participate in the second edition including four from outside the Kathmandu. Tribhuvan Army Club (TAC), Great Himalayan Cricket Academy (GHCA) and Kathmandu Cricket Training Center (KCTC) are few big names participating in the tournament amid others. Teams from Tikapur, Butwal , Makwanpur and Rautahat are also set to visit Kathmandu for the tournament.

Rupandehi
Deepak Pandey Memorial T20 cup started 10 days ago in Devdaha, Rupandehi is another example of shortest format gaining immense popularity in Nepal. Cricket academies and local schools have participated in the tournament for the top prize.

Itahari
A U-19 T20 cricket league in Itahari is set to begin on Friday. U-19 players Shahab Alam, Bhim Sarki and Aasif Sheikh are set to appear in the event along with former Nepal U-16 international Anil Kharel. Teams from Biratnagar, Nepalgunj, Dhangadhi, Kathmandu and Bhairahawa along with the host team Itahari Cricket Academy will feature in the tournament.

Campaign for Nepali blind cricketers
Nepali fans group Nepali Cricket Supporters Society (NCSS) has collected a total of Rs 317, 265 as of Thursday to support the Nepali blind cricketers who traveled strenuously taking routes by road and train for four days to reach Pakistan to participate in ODI World Cup for the blind. Campaign was started to provide expenditure to the national blind cricketers for their safe return to home in flight. The figure is expected to reach Rs 500,000 on Friday, according to the president of NCSS, Bhanu Sigdel.

Many influential personalities like Gagan Thapa, Paras Khadka, Binod Das and Subash Shahi among others came forward with the donations to help for the cause. A large number of fans and individuals have done their bit too.

The supporters’ society are planning to buy the return air tickets from the funds collected from the two-week campaign or the cash will be handed over to blind cricket team after they arrive in Nepal informed Sigdel. “We are expecting the cause will be discussed in top forum too and I have send proposals to an airline and a travel agency for further help” said Sigdel, a lecturer at Prime College, Kathmandu.

Afghanistan Cricket Board signed the Memorandum of Understanding (MoU) in an official ceremony held at Kabul to collaborate with an Indian based company, Snixer Sports Private Limited to organize Afghanistan’s premier T20 league. The inaugural league will be held in UAE. The inaugural APLT20 will have five teams that will play 23 matches in a round-robin plus knock-out format.

APL is set to have quota for international players in the teams apart from host of national and uncapped players playing domestic leagues in Afghanistan. “While 2017 was truly special for Afghanistan cricket, we start 2018 on a high note as we launch the Afghanistan T20 Premier League” quoted Shafiqullah Stanikzai, the chief executive officer (CEO) of Afghanistan Cricket Board (ACB) in the program.

West Indies to include USA in Regional Super50
USA’s national cricket team is set to feature in West Indies Cricket Board (WICB)’s Regional Super50 tournament, beginning on January 30 in Barbados and Antigua. They will follow the suit of Scotland and Namibia who featured in England and South Africa’s domestic one-day events. They join six West Indies (WI) franchise teams as well as Combined Campuses and Colleges (CCC), plus the English county sides Hampshire and Kent.

Previously, players from USA participated in the competition as part of a combined ICC Americas side, which included players from fellow associate nations Canada and Bermuda as well in last two editions of Super50.

The Regional Super50 is the start of USA’s 2018 fixture list. USA are also due to appear in the next ICC WCL Division 3. USA has been drawn in Group B in Antigua for the Regional Super50 along with Jamaica, Leeward Islands, Guyana and Kent. They will play a total of eight games in the double round-robin competition ahead of the semi-finals on February 21 and 22.

10 arrested from anti-MCC demonstration in front of US Embassy

KATHMANDU, Sept 3: A demonstration against the MCC took place in front of the US Embassy in Nepal on Friday... Read More...

GORKHA, Nov 2: The blacktopping on the Chhewetar section of the Bahrakulo-Barpak road in Gorkha has already started peeling off... Read More...

Seat allocation plan to be presented for discussion
1 hour ago