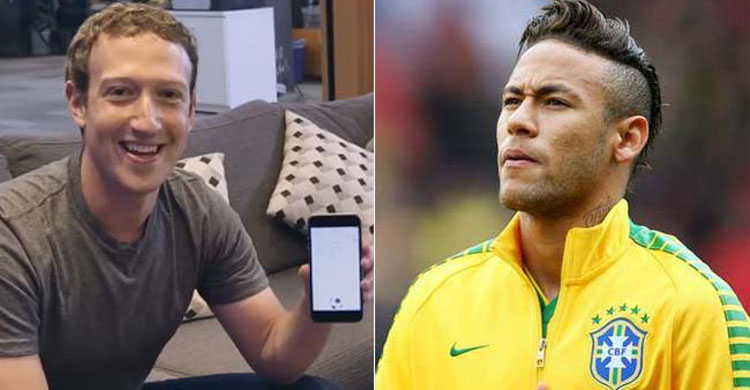 Football may not be Mark Zuckerberg’s strong point, but the Facebook founder has thrown down the gauntlet to Brazilian superstar Neymar Jr.

In a video posted on his Facebook page , Zuckerberg challenged Neymar to a game of keepy-ups - but there’s a twist.

Rather than taking place on the football field, the competition will take place on the secret football emoji game on Facebook Messenger.

First unveiled last month, to celebrate the start of the Euros , the game requires users to keep a football up in the air by tapping on their smartphone screen.

It may seem simple, but it gets harder. After 10 successful taps it will start throwing in distractions to make it more difficult.

Zuckerberg, who by his own admission has ‘never won a soccer game in his life’, has set Neymar a target of 37 keepy-ups to beat.

And Neymar has accepted the challenge. A couple of hours after Zuckerberg posted the video, Neymar replied saying ‘Challenge accepted. I’ll train and tomorrow I’ll talk to you…’

Neymar is due to see if he can beat Mark later on today, so we’ll let you know how he gets on.

If you want to challenge your own friends, here’s how to access the game on Facebook Messenger:

1. Make sure you’ve got the latest version of Messenger

2. Open up a message with a friend, or a group of friends

Neymar recently showed off his incredible freestyle skills ahead of 2016 Olympics. Brazilian football fanatics are hoping he can lead their country to gold medal glory.

Two killed in house collapse in Doti
23 minutes ago

Ruby Khan and govt strike deal, probe panel to be formed
33 minutes ago