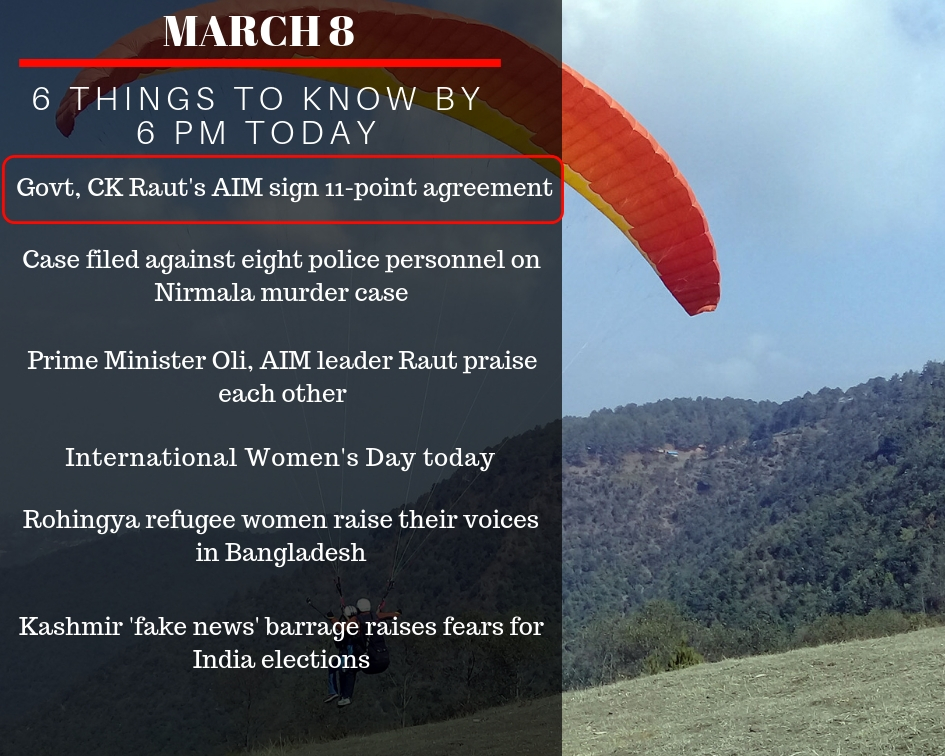 The government and CK Raut-led Alliance for Independent Madhesh (AIM) has signed an 11-point agreement, thereby ending the latter’s secessionist movement over the past few years. The agreement was signed by Home Minister, Ram Bahadur Thapa and AIM’s CK Raut at Rastriya Sabha Griha. 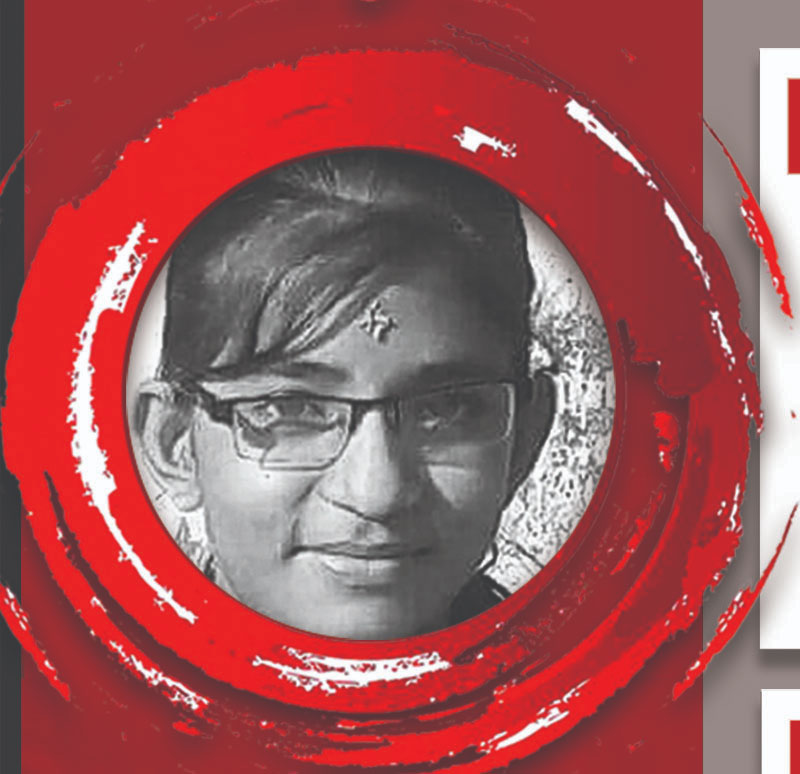 A case has been registered at Kanchanpur District Court against eight police officials for allegedly meting out torture and destroying evidence associated to the rape and subsequent murder of Nirmala Panta – a 13-year-old girl from Bhimdutta municipality-2 of Kanchanpur. 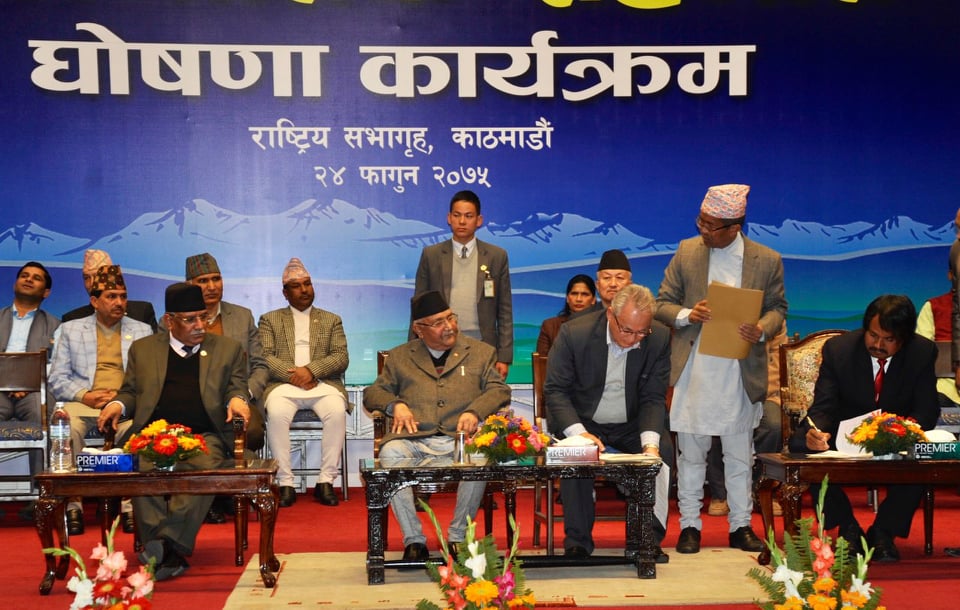 Prime Minister KP Sharma Oli and leader of Alliance for Independent Madhesh (AIM) CK Raut jointly addressed the program after Raut and the government inked an 11-point point deal in the capital, on Friday. Addressing the event, Prime Minister Oli said that today is an import day in the history of Nepali politics. "Today is the historic day in Nepali politics as it has marked the end of all kind of violent activities in the country," Oli said while praising Raut for renouncing the secessionist movement. 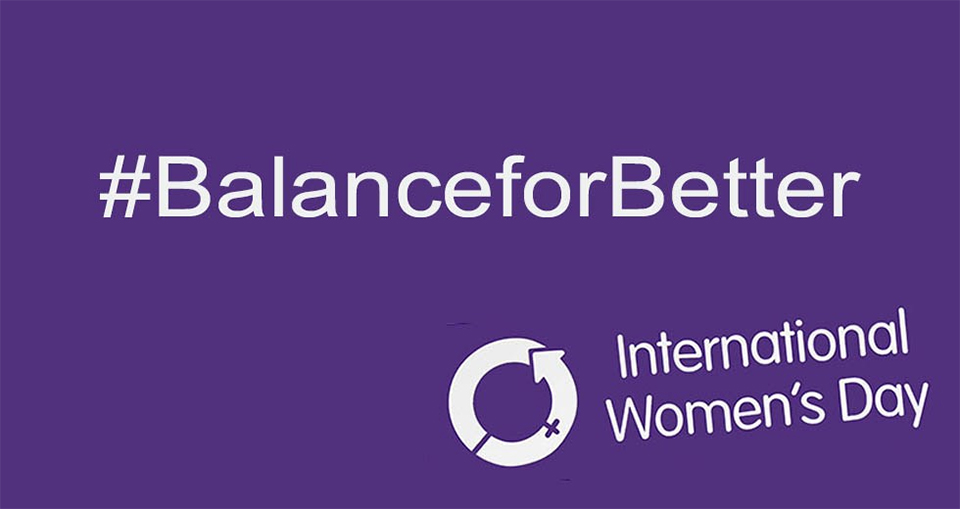 International Women's Day is being observed across the country by organizing various events today. First celebrated in 1911, the UN in 1977 proclaimed March 8 to be observed as the International Women’s Day. The theme for this year’s Day is: 'Think Equal, Build Smart and Innovate for Change'. 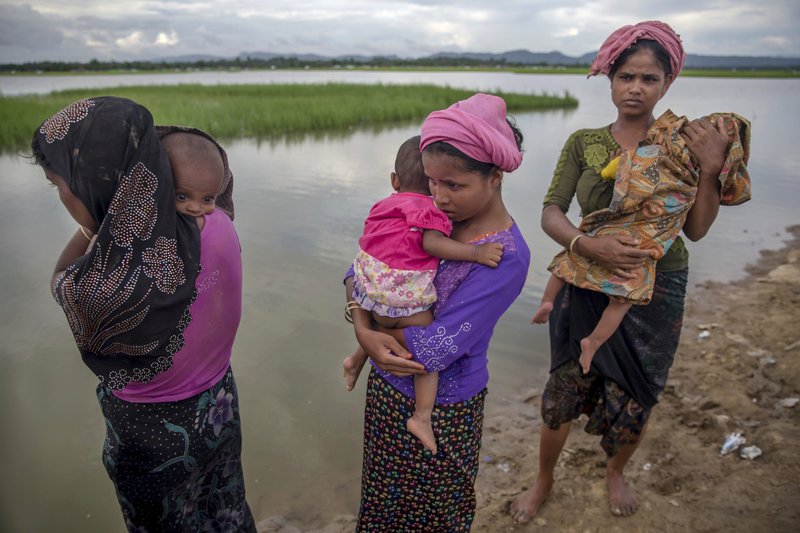 “We need more street lights,” says Tansima, 28, who is an elected deputy bloc leader at the world’s largest refugee settlement, which is home to 620,000 people, more than half of them women or girls. UN and humanitarian partners and making sure their voices are heard,” she says.Some 740,000 stateless Rohingya refugees fled a deadly crackdown in Myanmar’s northern Rakhine State that began in August 2017, and followed decades of persecution and violence.

A deluge of online hoaxes that hit Indian social media as the country fought aerial battles with neighbouring Pakistan has heightened fears over the "fake news" war looming in India's national election. The government is expected to imminently announce dates for the six-week-long vote across the nation of 1.3 billion people. More than 460 million people are online in India but digital literacy is often poor which only helps the spread of fake videos, photos and messages that incite lynch mobs, communal violence and hardcore support for the main political parties.

KATHMANDU, March 8: Prime Minister KP Sharma Oli has said that the government of Nepal has brought into implementation the... Read More...

Govt made extraordinary achievements in the past one year despite COVID-19 pandemic: PM Oli
20 hours ago

100 Days: Tokyo Olympics marked by footnotes and asterisks
20 hours ago
Biden set to withdraw U.S. troops from Afghanistan by Sept. 11
20 hours ago