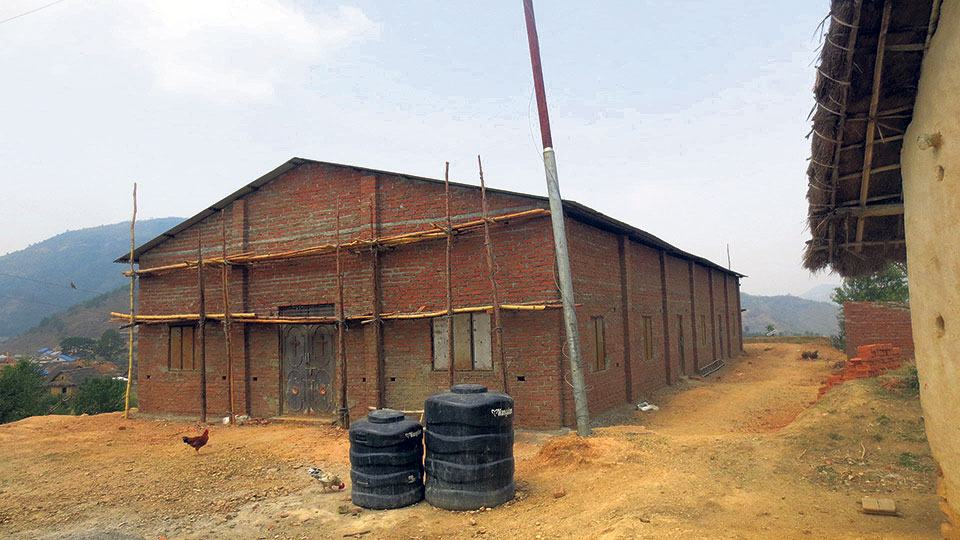 A church has been constructed near a school at Budhagaun in Rolpa.

ROLPA, May 18: School children in a Rolpa village have  to attend classes in dusty rooms because there is no school building, and the authorities have not shown any interest in their plight. At the same time a grand ‘Bhajan Mandali’ building dedicated to God has been constructed right beside the school at a cost of hundreds of thousands of rupees.

No questions have been raised about the financing or the  building permits for these ‘Lord’s Gospel’ establishments that have arisen after Nepal became a secular state. More than five dozen such places with different names have been constructed in the district. The authorities that used to keep records of temples do not have any information about these organizations.

“There is no provision for the registration of churches or Bhajan Mandalis. They need permission only if they are constructed in public places. So, we have no information about these buildings,” Rolpa Chief District Officer (CDO) Ganj Bahadur MC said.

Although, there is no official record of the churches or Bhajan Mandalis constructed in the district, it is said that more than 55   have been constructed. While, some of these organizations are run in rented premises, many have their own buildings.

Followers seek medical cure through churches
While shamans and traditional healers are disappearing from the villages, cases of people turning to the Bhajan Mandalis for medical cure have started to surface. Villagers are encouraged to believe that disease of any kind can be cured by turning to God.

“My wife started to  feel dizzy and her body shook abnormally. She was not cured by the hospital in the vicinity. A friend recommended we go to a church. We did so and she was cured. Since then, we have followed the path of Jesus,” said Deb Bahadur Pariyar, who recently turned Christian. “There are lots of people like us who started following Christianity since it cures the sick and does not have caste-based discrimination,” he added.

A Dalit woman who felt compelled to turn Christian because her mother-in-law was cured after offering prayers at a church is concerned about her children. “My sons are disappointed because they cannot receive tika during Dashain. We are told that we are not allowed to do so,” she said. She has been attending mass on Saturday mornings regularly for fear that her mother-in-law will become sick again.

Foreigners have been showing up at the churches in the villages. “We are frequently visited by foreigners,” said Tula Singh Khatri of Budhagaun who turned  Christian after his sick wife was apparently cured at a church.

In many cases, patients who should have been taken to hospital have died because they have trusted God’s worship instead. People are told to embrace death as salvation. Needy people turn to Christianity under economic assistance.

The authorities remain silent about such religion conversions which are popular in the Dalit and indigenous communities.

According to a former vice-chairperson of Nepal Magar Association, religion conversions that are induced will have an adverse effect on the Nepalese community.

He said, “The communists rendered these people nature-worshippers. It was just a strategy to make them religiously neutral and then promote communism.  This is going to create problems for all of us.”

According to former Maoist cadres, religious neutralization was forced upon the people of Rolpa during the Maoist armed  insurgency. That made is easier for  people to leave one faith and embrace another.

Negotiations with Maoists on PR System and Parliamentary Democracy