Many Sri Lankans want a strongman leader, and that favors Gotabaya Rajapaksa 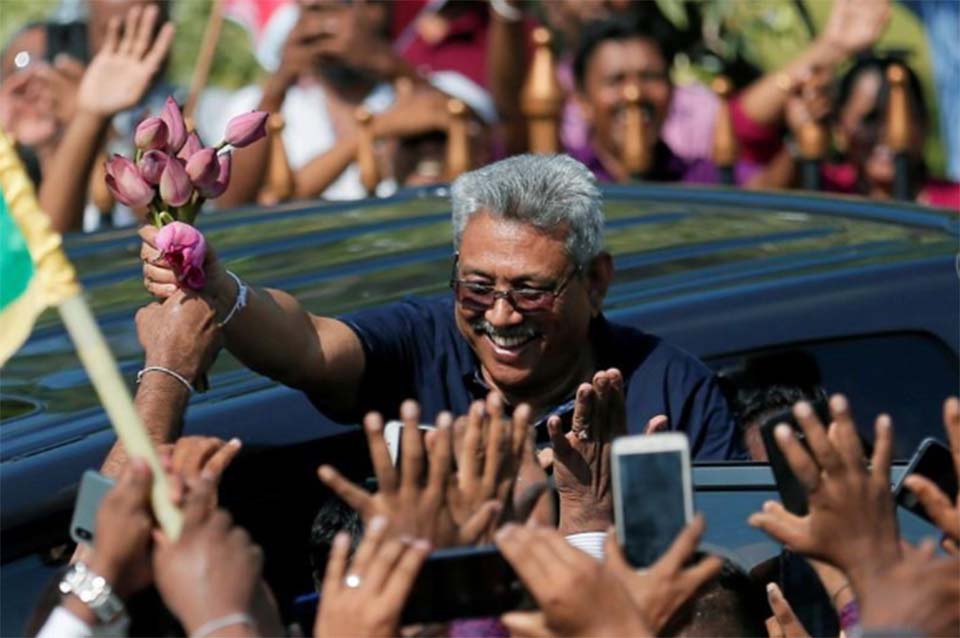 COLOMBO, Aug 11: Sri Lankans, angered by the government’s inability to prevent the Easter Sunday terror attacks that killed more than 250 people, want a strongman back in power who can guarantee their safety and bring back economic growth.

Many are rooting for Gotabaya Rajapaksa, who despite fighting allegations of war crimes, is expected to be announced as the presidential candidate of the opposition nationalist Sri Lanka Podujana Peramuna (SLPP) party, as early as Sunday.

The Rajapaksa brothers, Gotabaya and Mahinda, were credited with bringing peace to Sri Lanka in 2009 by defeating the Tamil Tigers in a brutal end to the 26-year-long civil war between the Sinhalese Buddhist majority and minority Tamil groups. Gotabaya was the defense secretary at the time and Mahinda the nation’s president.

“The people have requested a leader who can ensure their security,” Basil Rajapaksa, founder of the SLPP and youngest brother of Gotabaya and Mahinda told reporters on Thursday.

Gotabaya is facing lawsuits in the United States for instigating and authorizing the extrajudicial killing of a journalist and of war crimes against the Tamils during his time as defense secretary.

He has denied the allegations and said the lawsuits, brought by torture survivors and the daughter of the slain journalist, were timed to thwart his possible presidential run. A final date for the presidential elections has not been decided but must be held before Dec 9.

Sri Lanka’s constitution is modeled on the French system of government where the president has executive powers while the prime minister heads the parliament.

The current government is headed by President Maithripala Sirisena, the leader of center-left Sri Lanka Freedom Party (SLFP) while Prime Minister Ranil Wickremesinghe is from the center-right United National Party (UNP), which has a majority in the parliament.

Sirisena and Wickremesinghe, who have been at loggerheads since last October, have blamed one another for ignoring warnings from India and failing to stop the attacks.

Calls for a nationalist leader like Gotabaya, who has strong support from within Sri Lanka’s majority Sinhalese Buddhist community, echo similar choices made by voters in other Asian nations including India and Bangladesh.

In India, Prime Minister Narendra Modi, who was elected for a second term in May in a landslide victory, rallied his Hindu nationalist base and turned the campaign into a fight for national security and an aggressive stance against Pakistan.

Bangladeshi Prime Minister Sheikh Hasina, who won a third straight term in an election last December, has been criticized for suppressing dissent and jailing critics.

Reuters spoke to about 60 people, many of whom were victims of the terror attacks or affected by communal violence over the past year, and while some plan to abstain from voting, many of those who will vote say they want a more authoritarian figure.

Many Sri Lankan Catholics will not vote for Sirisena if he stands, said a senior Sri Lankan priest.

He is looking at Philippines President Rodrigo Duterte’s war on drugs as an example of the kind of behavior that is required despite evidence that it involved extrajudicial killings by police.

“A third world country like us needs a tough leader like Duterte - he is doing whatever is needed to rid his country of evils,” said the priest who did not wanted to be named because of the sensitivity of the subject.

“Gotabaya is accused of crimes but he is tough and that is what we need right now to bring back some order,” he said.

Father Jude Chrysantha Fernando, director for social communication at the Archdiocese of Colombo, said the church did not take political sides and would not ask people to vote for one candidate over another.

“What the cardinal said was that the political leaders and some security officials had prior information about attacks, but they have not taken any action,” he said. “That’s why the cardinal expressed his displeasure. But he did not take any political side. What he is asking is justice for the victims.”

While most Tamils are unlikely to vote for Gotabaya, the Muslim community may be divided.

S.H.M. Thameem, a government employee who is a Muslim, said he will vote for Gotabaya because the current government has failed to deliver.

“When there were anti-Muslim riots when he was the defense secretary, they were controlled within a day or two but Sirisena and Wickremesinghe have failed to control it. That adversely impacted the Muslim businesses and overall economy,” said Thameem who lives in the north-central district of Anuradhapura.

“We need a dictator, but I will not vote for Gotabaya as he is partially responsible for most of the suffering we see today,” said Faleel, referring to anti-Muslim riots and alleged abuses against the Tamils.

Keheliya Rambukwella, a spokesman for SLPP, said Gotabaya was out of the country when the worst violence against Muslims took place.

“But still he was able to prevent it within a day. This government could not control the spreading of anti-Muslim riots for a week last,” he told Reuters.

The lawsuit allegations in the United States may not hurt Gotabaya’s chances of winning because he has the overwhelming support of the Sinhalese Buddhist majority, said Kusal Perera, a political columnist in Sri Lanka.

“This election will be decided by the large majority of Sinhalese Buddhists who believe they need a hardline president to put things right. The Tamils and Muslims will be left out in deciding the president,” said Perera.

COLOMBO, May 5: Sri Lankan Catholics are celebrating Sunday Mass in their homes for a second week as churches remain... Read More...