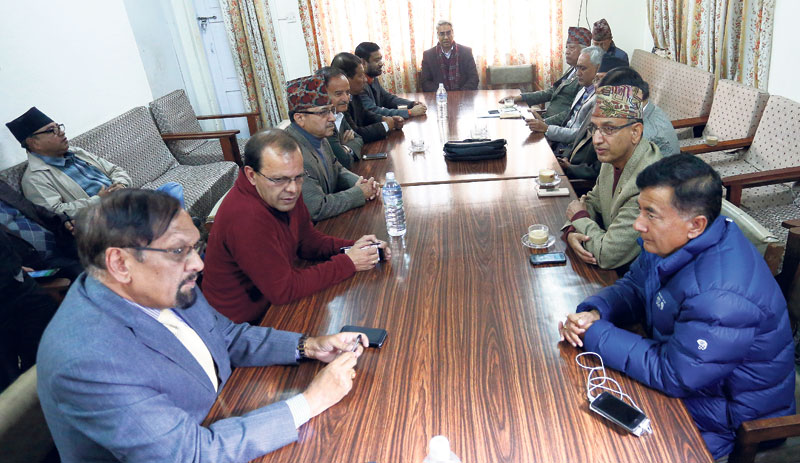 KATHMANDU, Nov 29: Majority of Nepali Congress (NC) leaders have expressed serious reservations over the constitution amendment proposal that the party leadership is seeking to push forward.

Although the leaders were positive about the amendment proposal concerning citizenship, representation in the upper house, and the formation of a language commission, majority of them objected to an amendment proposal which proposes taking five hill districts out from Province 5 to ensure that Province 4 stretches from Nawalparasi to Bardiya.

Speaking at a meeting called by party president Sher Bahadur Deuba on Monday to hold further discussions on the amendment proposal and chart out the party's strategy, most of the current and former office bearers and other leaders of the party suggested to the party not to move forward the amendment bill, which they said will fail in parliament, according NC leader Dr Minendra Rijal.

While President Deuba had argued that amendment to the constitution was necessary to hold polls within the stipulated deadline, Bimalendra Nidhi had echoed the party president. However, most leaders had argued that the amendment specially relating to the revision of Province 5 would push the country toward fresh round of conflict.

Speaking on the occasion, NC former general secretary Krishna Prasad Sitaula had urged the Party President Deuba to take initiative to call a meeting of the leaders of four major political forces. "It is not appropriate to bypass the UML while making amendment to the new constitution. Either you or the prime minister should take initiative to call a meeting to arrive at consensus on the amendment," he had further said.

Leaders hailing from Province 5 had suggested to the party leadership not to support the amendment proposal, which they said seeks to take out hill districts from the province. "I won't go against the decision of party president. I will vote the party line. But he should understand that we won't be able to handle the situation arising after the provincial boundaries are changed," NC leader and Minister for Defense Bal Krishna Khand had told the meeting. Khand, who is one of the close confidants of Deuba, hails from Rupandehi district in the same province.

While the main opposition party, CPN-UML, is against any amendment to the new statute, differences over the proposed amendment have emerged also within other ruling parties including the CPN (Maoist Center) and the agitating United Democratic Madhesi Front.

Maoist Center leaders hailing from Province 5 including Top Bahadur Rayamajhi have strongly objected to the proposal, the agitating Federal Alliance that comprises all constituent parties of the United Democratic Madhesh Front (UDMF) has also snubbed the government's calls to back the amendment proposal.

The alliance has decided not to accept a precondition about participating in the elections before the amendment is brought to parliament. "We cannot sign an agreement as precondition. We must get to read the amendment proposal before we do so," said the Alliance leader Manish Suman, while adding that they do not know what amendments will be endorsed by parliament.

KATHMANDU, May 7: As the rift between the establishment and rival factions of the Nepali Congress (NC) deepens, senior leaders... Read More...

DANG, Dec 26: The CPN (Maoist Center) Province-5 committee has come up with a new proposal on delineation of the... Read More...