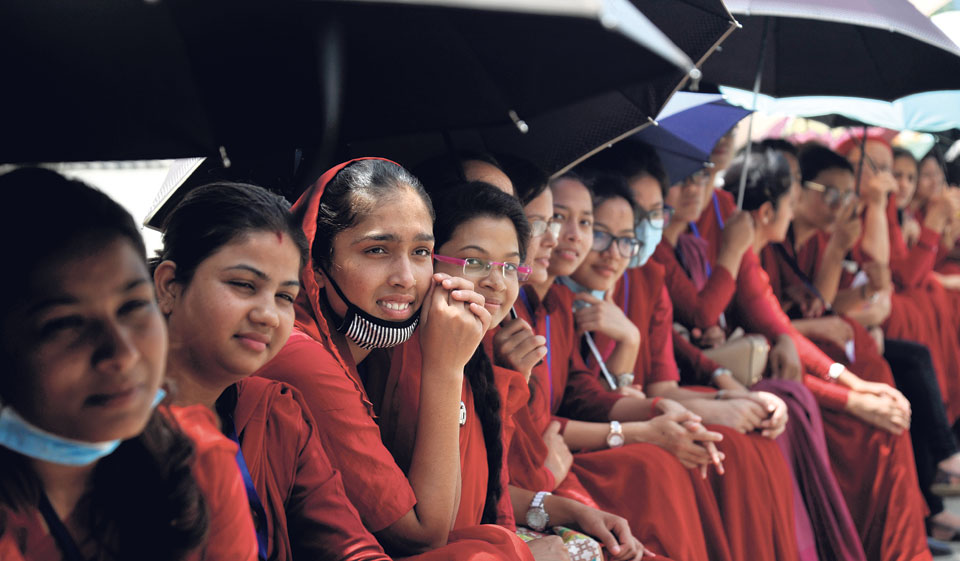 Nurses stage sit-in at New Baneshwar, Kathmandu on Wednesday in an expression of solidarity with Dr Govinda KC, who is on a fast-unto-death since the past 10 days demanding crucial reforms in the medical education sector. Photo: Keshab Thoker/Republica

KATHMANDU, Aug 2: It has been revealed that the erstwhile Pushpa Kamal Dahal-led government did not withdraw the bill on Manmohan Adhikari Institute of Health Sciences (MAIHS) even though a cabinet meeting had decided to withdraw it as a part of agreement reached with Dr Govinda KC last year.

A cabinet meeting held on September 29, 2016 had decided to withdraw the bill from parliament following an agreement with Dr KC, who has been advocating for reforms in health education sector. The government had then agreed to Dr KC’s demand against issuing affiliation to any new medical colleges in Kathmandu for the next ten years.

The decision to withdraw the bill can still be found on the website of the Office of the Prime Minister and Council of the Ministers (OPMCM) as of Wednesday evening.

Dr KC has been staging fast-on-to death for the 11th time demanding Medical Education Act among other reforms. But Dr KC has not included the demand of withdrawing the MAIHS bill from the parliament in his ongoing hunger strike believing that the cabinet decision has been implemented.

Jha claimed the bill has almost been finalized and the committee can table it to the full House for endorsement whenever she wants. “We have put it on hold for now as the committee is working on Health Education Bill,” she said.

Asked about the reason behind not withdrawing the bill, the then Minister for Health Gagan Thapa claimed that he himself had signed a letter addressing to the parliament for withdrawal of the bill.

“I still remember that I had signed a letter addressing the parliament to withdraw the bill following the cabinet decision. I thought it was withdrawn,” Thapa told Republica on Wednesday.

He also suspected foul play by someone in not delivering the ministry’s letter to the parliament.

But parliament secretariat spokesman Gautam said they didn’t find the letter from the ministry even after enquiring about it with the bills department and the concerned committee. “We have started tracking the status of the letter after hearing the claim of the ministry.”

According to rule 137 of the parliamentary regulations, the concerned minister should inform the parliament at least a day before withdrawing a bill from the House. The rule further states that the proposal should then be presented to the House for a decision. If the bill is under discussion in any parliamentary panel, the committee should report it to the House accordingly.

Former Minister Thapa said he will still follow up the status of the letter with the concerned office.

Former Health Minister Khagraj Adhikari of KP Oli-led government had registered the bill in the parliament in October 2015. UML leaders and lawmakers, who were shareholders of MAIHS, had chosen an alternative way for granting affiliation to MAIHS without meeting necessary conditions.

Dr KC to fast again if dean not appointed by seniority