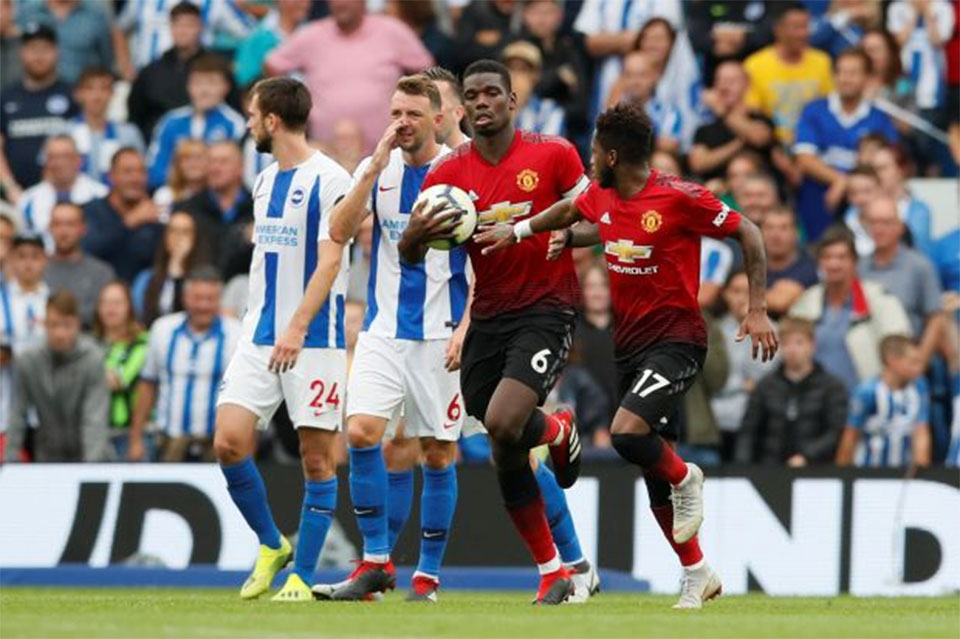 Where Pep Guardiola’s City again dazzled against the only side to stop them scoring at the Etihad Stadium in the league last season, United produced a tepid, defensively inept display that offered little hope that they will challenge this season.

Sunday’s other game saw Watford beat Burnley 3-1 to leave the Hornets as one of five sides unbeaten on six points at the top of the table.

Pogba’s injury-time penalty, after Marouane Fellaini was brought down, came too late to matter.

United’s captain was quick to admit that United have problems. “They had more hunger than us. My attitude wasn’t right,” said Pogba, adding that his team mates also approached the game wrong.

“We made mistakes we shouldn’t make. We tried to push and push, we kept trying, but it was a bit too late. It is a big lesson for us. I kept trying but I lost a lot of balls.”

The contrast with City’s performance hours earlier could not have been starker.

Once Aguero broke the deadlock on 25 minutes there was no way back for Huddersfield, and the Argentine followed up with further strikes on 35 and 75 minutes as City made light of the absence of the injured Kevin De Bruyne.

“I never saw him like this since I was here,” said manager Pep Guardiola, praising Aguero after pairing him with Gabriel Jesus up front.

“Sergio is in an incredible condition with the ball and without the ball. Last season, Huddersfield played five at the back. We decided today we would play with two strikers.”

So complete was City’s domination that it would have been no surprise if they had emulated the 10-1 scoreline they managed against the same opponents in 1987.

Particularly impressive was the range of attacking options open to Guardiola with almost every player providing a threat on goal.

Unbeaten Watford are alongside City as joint leaders after an eye-catching win at Burnley, who have gone seven league games without a win, following early second half strikes from captain Troy Deeney and Will Hughes.

Watford had been winless in their past 12 away games and had last netted away from Vicarage Road in January.

“It is important the amount of goals, but the quality as well,” said Watford’s Spanish manager Javi Gracia.

“Will Hughes scored an outstanding goal, I am happy for all of them.”

Burnley manager Sean Dyche accepted his side had handed the game to Watford after the interval.

“We gave the game to the opposition,” he said.

Only essential services to remain open from today
13 minutes ago

Kathmandu DAO urges hospitals to not create panic
47 minutes ago