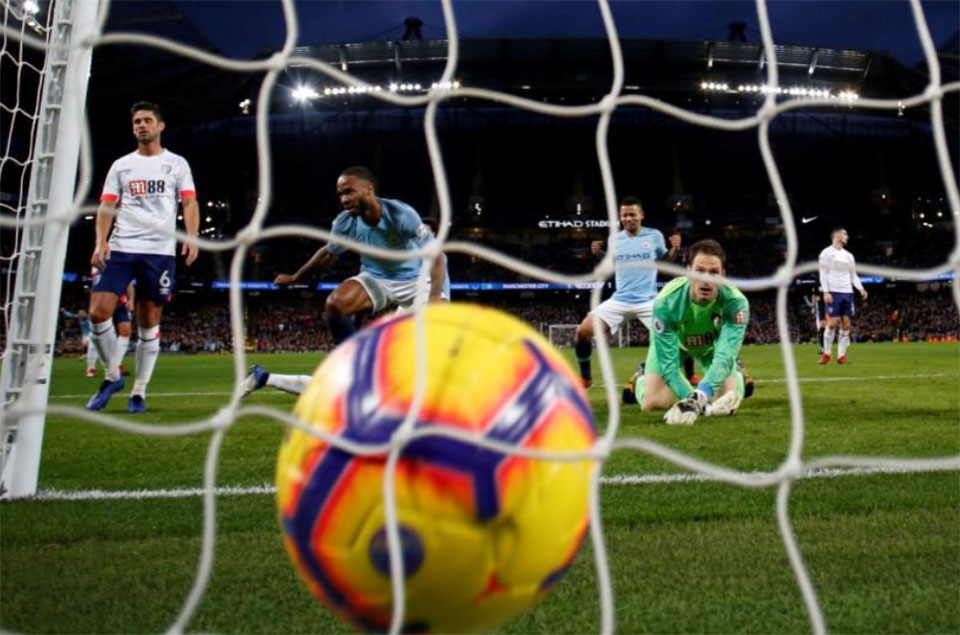 LONDON, Dec 2: Manchester City maintained their unbeaten run with a 3-1 win over Bournemouth to extend their lead at the top of the Premier League table as Manchester United fought back to salvage a 2-2 draw at Southampton on Saturday.

City top the standings by five points from Liverpool who face Everton in the Merseyside derby on Sunday after Tottenham Hotspur, who are third, face north London rivals Arsenal.

Crystal Palace beat Burnley 2-0 to end a run of eight matches without a win and there were victories for Leicester City, West Ham United and Brighton & Hove Albion.

City were without Sergio Aguero, Kevin de Bruyne and Riyad Mahrez at the Etihad but normal service resumed as they took the lead against Bournemouth after 16 minutes through Bernardo Silva.

The visitors went into halftime level, however, thanks to a header from in-form England striker Callum Wilson.

Bournemouth’s hopes of a stunning upset were dashed as the champions struck again with goals by Raheem Sterling and Ilkay Guendogan.

“Bournemouth are a good side, so strong up front, so we could not press,” City manager Pep Guardiola said. “They played long balls, attacked the channels. They were taller than us and stronger than us.

“In the last 20 minutes we were flat and that is why I am delighted to win in that way.”

Guardiola’s side are 16 points ahead of neighbours United whose poor season continued with a draw against struggling Southampton at St Mary’s Stadium.

Southampton’s Stuart Armstrong fired an unstoppable shot past David de Gea after 13 minutes and the Spanish goalkeeper was beaten again by a curling Cedric Soares free kick into the top corner.

Southampton let a two-goal lead slip against Fulham last week and United quickly hit back through Romelu Lukaku who was set up by Marcus Rashford.

The goal was the Belgian striker’s first for his club since the middle of September, a drought lasting 981 minutes.

Ander Herrera equalised before halftime to bring United fully back into the contest but the match petered out into a draw, a result that will not please either manager much.

“We did so well in the last 10, 15 minutes of the first half... good spirit, good fight, good comeback from 0-2 to 2-2 and great examples of players fighting to the limits,” Mourinho told BT Sport.

“Positive examples include Marcus Rashford, Phil Jones and many others showing that respect for the shirt and showing respect for the club. Not the result we wanted but a performance that had positive things.”

Huddersfield Town looked set to continue their recent upturn in form by scoring after 58 seconds at home to Brighton, Mathias Jorgensen heading in the fastest goal of the Premier League season.

However, the hosts were reduced to 10 men after half an hour when Steve Mounie was sent off for a high challenge and Brighton took full advantage with goals by Shane Duffy and Florin Andone.

Palace leapt above Huddersfield in the standings by beating Burnley at Selhurst Park to lift the pressure on manager Roy Hodgson.

Strikes in each half from James McArthur and Andros Townsend were Palace’s first goals from open play at home all season. Burnley remained in the relegation zone having slipped down to 18th after Cardiff City’s 2-1 win over Wolverhampton Wanderers on Friday.

Leicester recorded their first home win in the league since September with a comfortable 2-0 victory over Watford.

Jamie Vardy opened the scoring with a penalty after 12 minutes before James Maddison netted a brilliant volley to move Leicester up to eighth.

West Ham striker Javier Hernandez scored twice and Felipe Anderson grabbed another as the London side won 3-0 win at Newcastle United, halting the recent momentum of Rafa Benitez’s side.

City and Sterling sparkle but Guardiola worries about defending

MANCHESTER, Nov 5: With two minutes to go and his team 5-1 up against Southampton in Sunday’s Premier League encounter,... Read More...