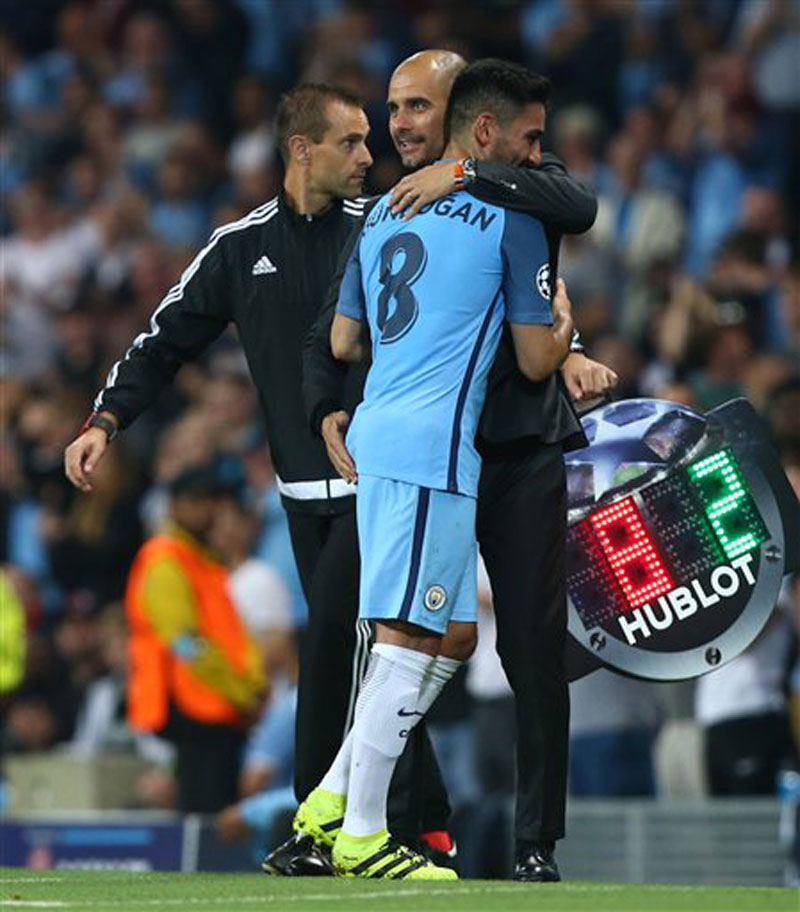 GENEVA, Sept 29: In a fiercely competitive Champions League round on Wednesday, the 100 percent winning records of Pep Guardiola and Carlo Ancelotti with their new clubs finally came to an end.

Guardiola's Manchester City trailed three times at Celtic, leveled each time and finished strongly before having to settle for a 3-3 draw. The coach's winning streak to start the season ended at 10 matches.

Ancelotti, a three-time Champions League winner as a coach, had won his first eight games at Bayern Munich, but his team failed to impress in losing 1-0 at Atletico Madrid. It was a repeat of the result at the Vicente Calderon stadium when the teams met in the semifinals last season.

Barcelona played its part on a night of come-from-behind wins, 28 goals in eight matches and three missed penalties.

The five-time champion, missing the injured Lionel Messi, trailed at Borussia Moenchengladbach before scoring twice in a nine-minute period midway through the second half to secure a 2-1 win.

Here is how Wednesday's action unfolded:

Arsenal and Paris Saint-Germain, who drew 1-1 in France two weeks ago, both won to take control in the standings.

Arsenal was at its slick-passing best in beating Basel 2-0 and threatened a rout after Theo Walcott scored twice in the first 26 minutes.

Alexis Sanchez assisted for both goals and began a personal duel with Basel goalkeeper Tomas Vaclik to get his own name on the scoresheet.

When Vaclik was beaten by Sanchez, in the 68th minute, the Chile forward sent his shot wide of a gaping goal — and raised his shirt to hide his face in frustration.

PSG fell behind in Bulgaria when Ludogorets Razgrad scored in the 16th through Brazilian defender Natanael.

Blaise Matuidi and Edinson Cavani gave the visitors the lead before Ludogorets defender Cosmin Moti had a penalty saved by Alphonse Areola. Cavani quickly sealed the outcome, getting his second goal in the 60th for a 3-1 win.

Arsenal and PSG have four points, and Basel and Ludogorets each has one.

Napoli extended its impressive home form, and its lead in the group standings, by beating Benfica 4-2.

The Italians raced to a four-goal lead in under an hour, with Marek Hamsik breaking the deadlock, Dries Mertens scoring twice and prolific Poland forward Arkadiusz Milik converting a penalty.

Benfica, which gave up a late leveler to Besiktas two weeks ago, scored twice late on through Goncalo Guedes and Salvio.

Besiktas got its second straight 1-1 draw after 18-year-old substitute Viktor Tsygankov earned Dynamo Kiev a point in the 65th minute in Istanbul.

That canceled out Portugal winger Ricardo Quaresma's free kick in the 29th.

Napoli already has a four-point lead over Besiktas. Benfica and Dynamo each has a point.

A pulsating Scotland vs. England clash ended up 3-3 as Celtic gave Man City its biggest scare of the flourishing Guardiola era.

Moussa Dembele missed a penalty in Celtic's 7-0 drubbing in Barcelona but took only three minutes to banish that memory and score on Wednesday. That lead lasted only nine minutes until Fernandinho equalized.

City winger Raheem Sterling scored at both ends in an eight-minute span to make it 2-2 in the 28th. Dembele scored three minutes into the second half, and again City took nine minute to level through Nolito.

The Premier League leaders were denied late on by Celtic 'keeper Craig Gordon's save of Ilkay Gundogan's shot.

Barcelona ended Borussia Moenchengladbach's long winning run at home but only after trailing at halftime. Thorgan Hazard scored in the 34th, finishing off a move after Barcelona's Sergio Busquets was dispossessed in midfield.

Busquets was involved in the equalizer, finding Neymar to deliver a key pass for substitute Arda Turan to score with a shot in the 65th.

Defender Gerard Pique scored nine minutes later to seal a 2-1 win for Barcelona, which is seeking its fifth Champions League title in 11 seasons.

Barcelona leads the standings by two points from Man City before the teams meet in Spain on Oct. 19.

Atletico Madrid and Bayern Munich were quickly reunited in the group stage after meeting in last season's semifinals. Then, Atletico advanced on away goals after winning the first leg at home 1-0.

Coach Diego Simeone's team again needed only one goal on Wednesday but wasted better chances to reflect its superiority.

Belgium winger Yannick Carrasco scored in the 35th, aiming a shot on the run past Bayern 'keeper Manuel Neuer that went in off a post.

Earlier, Fernando Torres headed against a post from close range. In the 84th, Antoine Griezmann struck the crossbar with a hard-hit penalty — just as he did in the final last season, when Atletico lost to city rival Real Madrid for the second time in three seasons.

PSV Eindhoven's penalty miss against Rostov was more costly, coming in the second half of a 2-2 draw in Russia.

Just like Celtic, Rostov couldn't keep its leads for long and goals by Dmitry Poloz were soon cancelled out by Davy Proepper and Luuk De Jong in the first half.

Proepper had the chance to end PSV's dire recent record from the spot, but his kick was saved by Rostov goalkeeper Soslan Dzhanaev.

Atletico has six points, three clear of Bayern and with an early advantage in any head-to-head tiebreaker in the group.