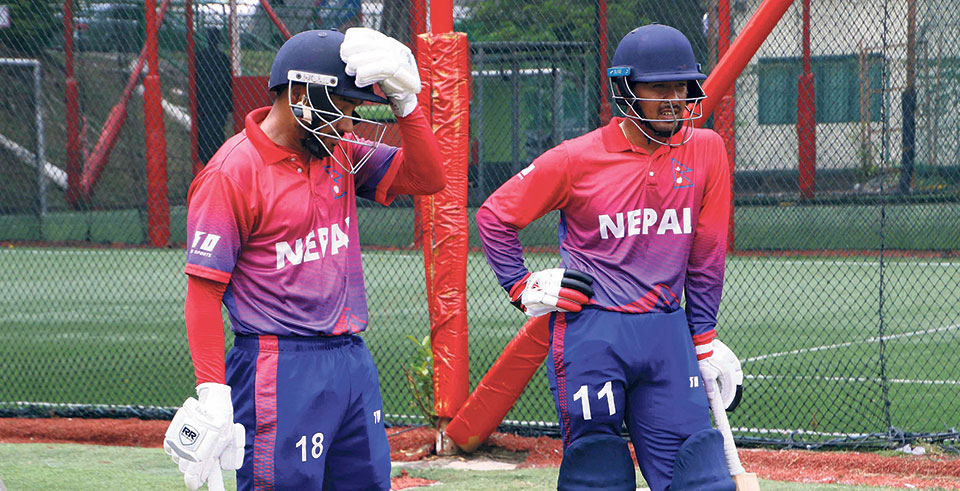 KATHMANDU, July 25: Nepal national cricket team recovered from a humbling four-wicket defeat at the hands of Qatar in the opener as it beat Malaysia by seven wickets in the ongoing ICC World T20 Asia Regional Final Qualifiers in Singapore on Wednesday.

In Nepal’s second match of the tournament which was reduced by DLS method to nine overs at the Indian Association Ground, captain of the day Gyanendra Malla, who replaced Paras Khadka after the latter suffered a back spasm, scored a maiden half-century off 20 balls, in the 23 T20I and ODI matches he has played so far, to get the win for Nepal.

Earlier, Nepal won the toss, elected to field first and was presented with a target of 84 runs for the loss of seven wickets in nine overs. In reply, Nepal chased the target hitting 86 runs losing three wickets with an over still left to play.

Only two Malaysian batsmen managed to reach the double figures with the score being 37-4 within 3.3 overs. Syed Aziz scored the highest 30 runs off 15 balls for the team including a six and five fours, while he was supported by 17-ball 21 from Virandeep Singh with a six and a boundary.

The openers both went out for ducks, while the other five batsmen only managed to make 26 runs.

Sompal Kami was the standout bowler of the game as he picked up three wickets conceding 23 runs in his two-over spell, while Basant Regmi claimed two wickets giving away nine runs in one over. Likewise, Sandeep Lamichhane and Karan KC took a wicket each bowling two overs each.

Opener Malla played brilliantly with the bat hitting 51 runs off 21 balls, which was the fastest half-century in Nepal’s T20 cricket, including three sixes and five fours. His dismissal came in 5.2 overs with the score being 66-1.

He was supported by Binod Bhandari’s not out 13 runs off eight balls which included a six, while the other opener Pradeep Singh Airee hit 12 runs off 14 balls comprising a boundary.

Muhamad Syahadat was the only Malaysian bowler to take wickets as he claimed three giving away 19 runs in two overs. Sharvin Muniandy was the most expensive bowler as he conceded 21 runs in just one over.

Malla was named the player of the match.

After the end of the second round of fixtures, Nepal has climbed to third in the table with two points from as many games. Singapore leads the chart with three points, while Malaysia is ahead of Nepal in the second place with two points, but on superior net run rate.

Likewise, Qatar has two points and is in the fourth position, while Kuwait has one point.  Nepal will now take on Kuwait in its third game on Saturday. Kuwait plays against Qatar and Singapore faces Malaysia on Friday.

Team Nepal on the decline in absence of cricketing body