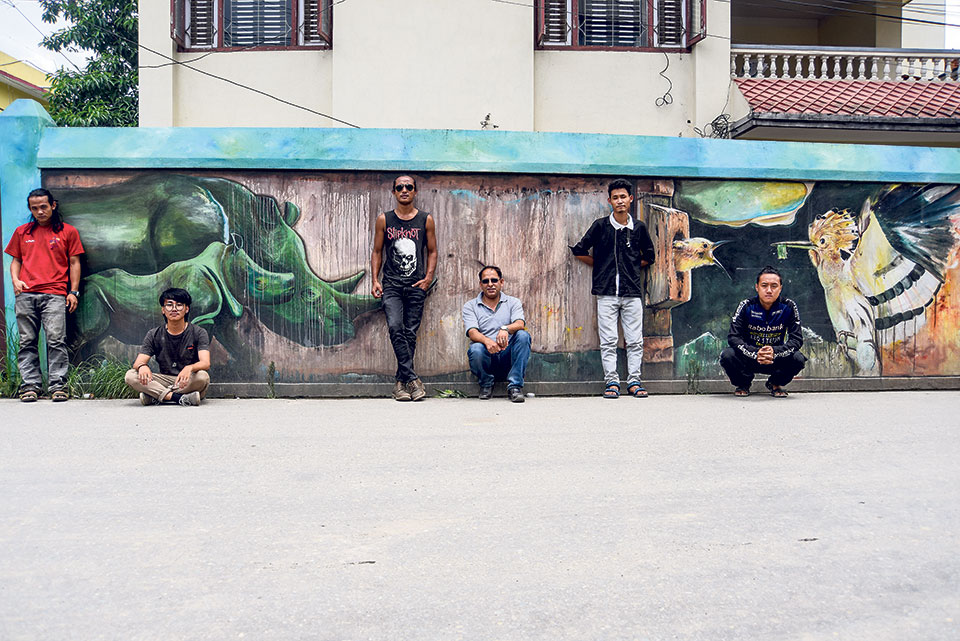 Despite the difficulties they have endured and the ones that are in sight, the group is hopeful and undeterred because art to them means so much more than just paint and color.

The conquest to understand art has been long and unceasing. Too many people argue that it is inexplicable, an enigma, and that its meaning takes shape with people, their perspectives, their ideologies and their experiences.

Laxman Shrestha is one such searcher. Always an art enthusiast, he has devoted himself to honoring his artistic leanings in his pursuit of freedom or what he calls ‘nirvana’. But while he previously painted for the fun of it he now paints for a cause, to deliver meaning and inspire change in how we perceive our surroundings. A result of which is his being chosen as one of the eight Nepali artists for the 17th Asian Art Biennale to be held in Bangladesh. He will be showcasing his canvas ‘Starving Moon’.

“I’ve always loved to paint,” says Shrestha, “And the thing with me is that I’ve always felt a compulsion to share all that I create. You could call me a compulsive show off.” In his younger days he hung his paintings at cafés and restaurants and it was in these times that he sold his very first painting. It filled him with greater enthusiasm and fuelled his passion for art at a very crucial time when he was mulling over what to do with his life.
In almost a decade of his career, perhaps the most significant of all is his involvement with Khoj group, a group of six: four artists, a writer, and a photographer. Khoj group was conceived off Bhim Bahadur Thapa (Khoj Baje’s) ideologies in inspiring social transformation with man’s insatiable curiosity and his unending passion for search. With a set aim of completing a whooping 101 murals along the streets of Kathmandu by 2022, the group brainstorm ideas each day. And Shrestha says that nothing can stop them from achieving their goals as they find solace in art and they thoroughly enjoy what they do.

Each mural is to convey strong social messages and challenge the contemporary beliefs of the modern society. This project is an undertaking without any expected profit and funded solely from the nation’s investors. For the project, the group has unanimously agreed on abstaining from accepting foreign aid but encourage Nepali investors to consider donating. Their decision comes from their shared frustration on Nepal’s dependency on foreign aid for every major undertaking. This, at least, they wish to do on their own. The team already has seven murals already up on the walls on Bhimsengola in Baneshwor, one of which is still in the making.

Sub artists Raju Ghalan Tamang, Puskar Chamling Rai, and Yambang Gaha Hood are BFA students at Lalit Kala Campus of Fine Arts. They have taken in to learning from Shrestha whom they consider their mentor since his approach to art and expressionisms were something they had never seen before. Tamang particularly notes that too many people had told him to develop his own distinguished style, “For someone who had barely understood art, imploring them to find their style is extremely cumbersome. It takes away the thrill from it. Laxman dai encourages individual freedom of thought. He’s always telling us to keep working and not worry about style and whatnot. Creativity loses the fight against pressure,” he says.

It has never been easy for art in Nepal and it probably won’t be in the near future. The Nepali society has very constricted opinions on the prospective of one’s future. Thus most youths find themselves lost when having to choose between a select few “elite” professions that are not even close to their subject of interest but if they choose to digress they risk shaming their families. Therefore, too many youths opt for ‘stable’ professions despite having no interest in it whatsoever.

The Khoj team sees reason for this submission, “Many Nepali youths are without direction. Calling them aimless wouldn’t be too farfetched. In such states of confusion they randomly follow their friends and end up with jobs that do not interest them. It’s hard standing ground and it’s hard resisting the flow. Submission seems easy,” says writer Shiva Kumar Sharma.

At a very recent oration, the Minister for Finance deemed the study of fine arts to be a D-grade course. “Art is all encompassing,” argues Shrestha, “It reflects the study of sociology, metaphysics, economics, and ignoring these aspects showed ignorance on the minister’s part. But the Nepalis community on the whole is the same. The minister was one of many.”

Lalit Kala Campus of Fine Arts that has withstood over eight decades is in a dilapidated state. What should be a treasured trove is a pitiable structure that has no functioning classes and carries teaching in an unstructured system, providing diplomas that do not have international recognition.

The artists never really harbored phantasms of leaving Nepal. They stand firm on the idea that Nepal has more opportunities than any place on earth. Hood says, “Nepal is a land of opportunities. Contrary to popular beliefts, Nepal isn’t lacking jobs rather it is lacking the foresight to identify niches and unconventional areas. There is so much to do but very little is done”.

And with their project, the Khoj team is trying to do their bit in changing that mindset. They are also planning to release a compilation booklet of their murals once their target is reached which might help people see the potential art has to bring about change. Despite the difficulties they have endured and the ones that are in sight, the group is hopeful and undeterred because art to them means so much more than just paint and color. 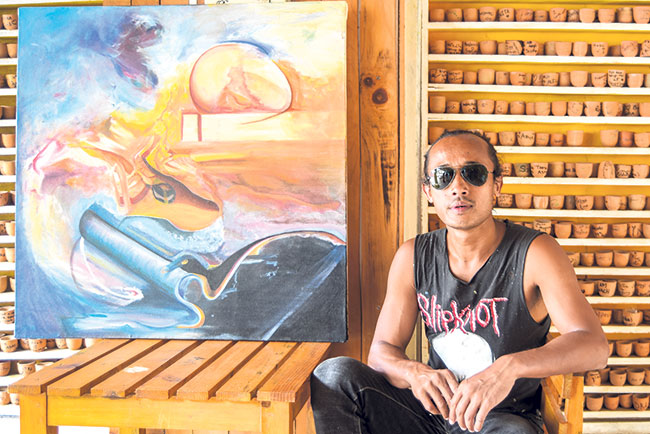 Dead Brushes
The country is ruled by the corrupt and, despite civic awareness, people really don’t do much. They whine and complain while still possessing the ability to bring about change. They are thus dead brushes.

Peace?
Everyone is in search of peace but where are we? Have we have had enough taste of peace to know what it feels like? How can we expect there to be any peace with terrorism, global warming, species endangerment, and more than we wish to know, that is plaguing the very land we call home?

Money
This piece sheds light on our newly propounded religion: Materialism. The craze for money has torn apart the very meaning of being human.

My World
Don’t we create realities in our own minds? Trying to believe what we want to, molding truths to our own liking. This mural calls against the selfish behaviors of individuals that have become core to our very being.

Water?
Development is good but at what cost?  The progress of infrastructure is at the compromise of our living. The air is more polluted than ever, our heritages are neglected and there is unrest in the nation as we watch our neighbors being uprooted from their very homes.

Time VS
Time is ever forward moving. It can’t be stopped and the sooner that is accepted the better it is. Why race it then? Take it in real slow and enjoy every tick of the clock.

In his debut movie ‘Kabaddi Kabaddi’, Buddhi Tamang managed to stand out and leave a mark despite being surrounded by... Read More...

Infographics: The Governments making the most Twitter info requests

As part of their latest Transparency Report, Twitter has revealed the national governments which have sent the most requests for... Read More...

How taking service from Weather news, a global weather-based company based in Japan, has helped keep flights safe at Buddha... Read More...