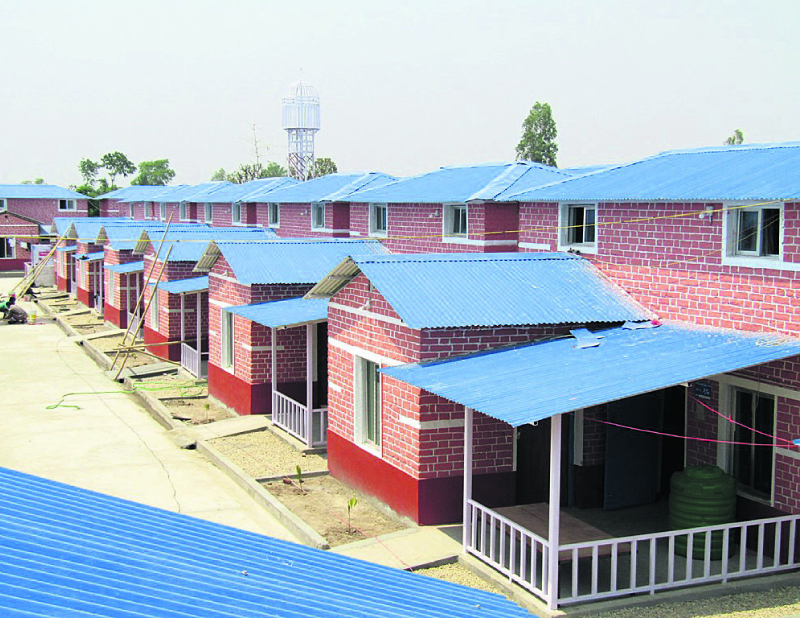 MAHOTTARI, April 11: “We will have a house, a water tap, electricity, a toilet, a playground, and a school for children!” Manju Kumari Sada, 19, shares happily. “We never thought we would ever get all this in our lifetime,” she adds.

The historically marginalized Musahar community of Mahottari, of which Manju Kumari is a member, is simply awestruck. Actors Sitaram Kattel and Kunjana Ghimire (popularly known as Dhurmus and Suntali) have nearly completed a model integrated village designed for the community and are going to hand over brand new houses to the Musahar families soon.

The settlement at Bardibas-2 is the third such project the comedian couple has initiated. But, for the Musahars, it is the first ever incidence in their lives that has made them incredibly happy.

Marani Devi is a century old now - arguably, the oldest one in her community. Marani has hardly spent a day without sticking her eyes to the construction work ever since it started three months ago. No sooner does the sun rise is the sky, than Marani Devi comes out of her hut and sits down on a stool facing the village site. She has been doing this almost every day for the past three months.

“She cannot move around that well nor can she hear or talk properly. However, she loves looking at the construction of those houses. She looks very happy while doing so,” say her grandsons.
The Musahar community is excited as after three days, they will move into their own houses. On the first of Baisakh of the Nepali New Year, the village will be handed over to the community.  Once they get in the house, they will no more have to face ‘the brutal rain, sun and cold’ as they had to all these years.

“We are going to celebrate the day we move into those houses by cooking rice, meat, fish and other delicacies for ourselves and offer the same to others as well. We’ve never been as happy as we are now,” said an overwhelmed Jaleshwari Devi, 60. “We are preparing for the big day hoping that miseries have ended in our lives and we are going to live comfortably,” she added.

As they never had concrete houses to live in, the Musahar community never had an easy life. During the dry season, their huts would be claimed by fire. In the monsoon or cold, the children and elderly would always fall sick. But now, Jaleshwari Devi thinks that they have got a new lease of life.

According to the Dhurmus-Suntali Foundation, there are 50 residential houses for Musahars at one location. Also, there are 53 other such houses for marginalized people of the other communities.

Apart from this, there is a children’s park, a playground, a view tower, a temple, a community building and several other infrastructures that will help the community live a comfortable life. “Around Rs 40.7 million has been spent so far,” Kattel said. “This has been possible due to the generosity of people and several organizations. It is also a message that a strong will power makes anything possible. If we get united to change the face of our country, this can happen within a short time,” he asserted.

Freed Haliyas finally get their own homes

Freed Haliyas finally get their own homes

KMC to run free ambulance service during Dashain
32 minutes ago