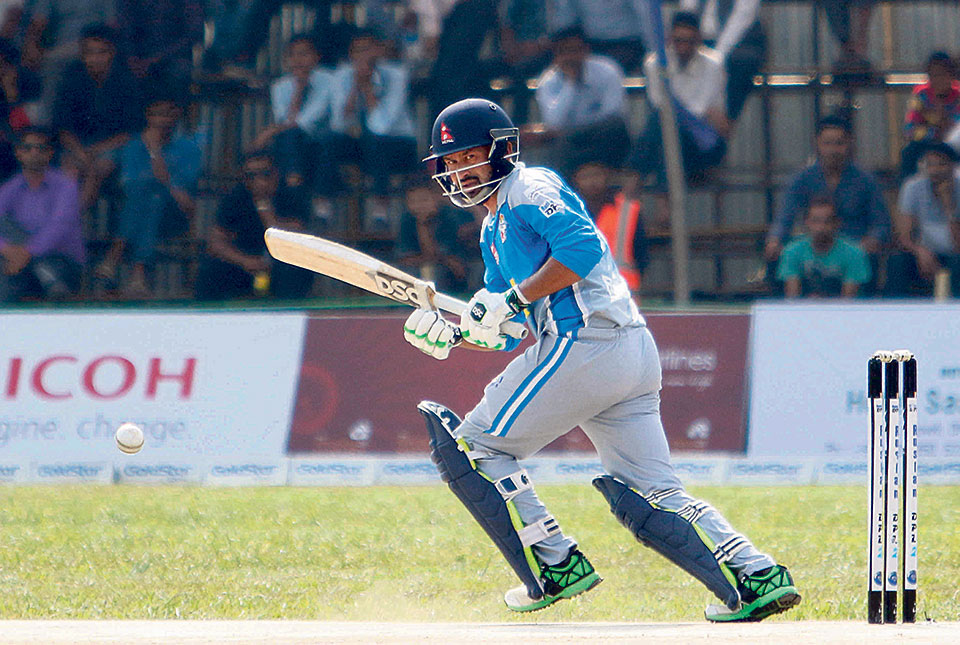 Rupandehi fails to make it to playoffs

Biratnagar defeated Team Chauraha Dhangadhi by 18 runs in the first match played at the Seti Zone Police Cricket Ground, while in the second match Mahendranagar beat strugglers Rupandehi Challengers by four wickets which saw Rupandehi become the first team to have failed to qualify for the playoffs this season.

Chauraha won the toss and opted to field first and was given a target of 128 runs by Biratnagar, for the loss of all wickets in 19.5 overs, but Chauraha failed to chase even that making just 109 runs for the loss of nine wickets in the allotted 20 overs.

In the other match played on the same day, Rupandehi won the toss and elected to bat first and presented a target of 144 runs for the loss of eight wickets in the allotted 20 overs.  In reply, Mahendranagar chased the target for the loss of six wickets in 18.5 overs.

In the first match, Pawan Sarraf hit the highest 41 runs off 34 balls which included two sixes and a four, while the opener Anil Kumar Sah scored 24 runs off 19 balls including a six and four fours.

Sunil Dhamala was the pick of the Chauraha bowlers as he nicked four wickets giving away 10 runs in the four overs he bowled, while Sompal Kami and the United Arab Emirates (UAE)’s Rohan Mustafa picked up two wickets each. Likewise, Lalit Bhandari and Samsad Sheikh pocketed a wicket each.

In reply, despite having a slender target, Chauraha players could not do justice with their bats. The highest scorer for the losing team was Shankar Rana as he hit 25 runs off 38 balls including a four, while the opener and the UAE recruit Ashfaq Ahmed scored 22 runs off 16 balls which included two sixes and a four. Likewise, Raju Rijal made 18 runs off 11 balls including a six and a boundary, while Dhamala hit 12 and Mustafa scored 11 for Chauraha. Also, Rajesh Pulami Magar contributed eight runs, while Kami hit three with Sonu Tamang and Yogendra Singh Karki scoring a run respectively. Sheikh was caught out by Nath for a duck.

Sarraf was man of the hour as he also picked up four wickets giving away 25 runs in the four overs he bowled, while Regmi and Khadka picked up two wickets each. Likewise, Kamat pocketed a wicket for the winning side.

Sarraf was named the man-of-the-match and was rewarded with Rs 10,000.
In the second match, Rupandehi’s Pradeep Singh Airee became the first player to reach the 150-run mark in the tournament this season, but the failure of other players to add runs to the board, saw them get knocked out of the tournament as the team has one more game to play.

Punit Bisht was the pick of the Mahendranagar bowlers as he pocketed four wickets giving away 12 runs in the four overs he bowled, while Bhuvan Karki, Puneet Mehra, Avinash Karn and Karan KC claimed a wicket each.

In reply, Binod Bhandari hit the highest 61 runs off 48 balls for Mahendranagar including two sixes and five boundaries, while Bisht scored 45 off 22 balls which included four sixes and three fours. Likewise, Mehra contributed 16 runs off 16 balls with two boundaries, while Rohit Kumar Paudel hit not out seven runs off two balls with a six, Aasif Sheikh scored five and Aarif Sheikh made four. KC and Harishankar Shah were out for ducks.

For Rupandehi, Dipesh Shrestha picked up three wickets giving away 25 runs in the four overs he bowled, while Bhari pocketed two wickets and Pun claimed one.

Bisht was named the man-of-the-match and was rewarded with Rs 10,000.

Biratangar will take on leaders Kathmandu Goldens, who has not still lost a single game, while the former will be hoping to go level on points with Kathmandu with a win.