Mahabir relegated from B division 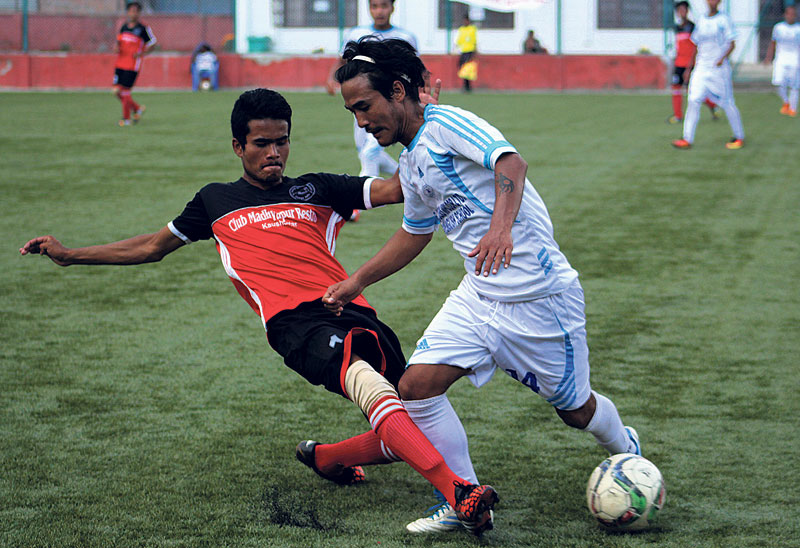 Players of Madhyapur Youth Association (red) and Nayabasti Youth Club vie for the ball during their Martyrs Memorial B Division League football tournament at the ANFA ground, Satdobato on Friday. ( Photo Courtesy : ANFA )

KATHMANDU, Sept 30: Mahabir Club became the first team to face relegation from the ongoing Martyrs Memorial B Division League football tournament on Friday after it faced 2-4 defeat at the hands of Khumaltar Youth Club in the penultimate round of tournament at the artificial turf of ANFA ground, Satdobato.

After facing 10th defeat with only one match remaining in the league, Mahabir has four points and stands at the bottom of the standings. Mahabir, one of the oldest existing clubs of Nepali football, has won one and drawn one match. Bottom two teams of the table will be relegated to C division at the end of the league contested by 14 teams.

Mahabir's closest competitor at the table Samajik Youth Club has eight points meaning the former do not have any chance of moving to safe zone irrespective of any outcome in its last fixture.

Mahabir, established during 1960 is also the three time league champion of the top tire domestic football. It was relegated to B division on 2003, according to Diwakar Ghale, the president of the club.

“We will play in the C division next year and try to earn promotion,” said Ghale. He also expressed dissatisfaction over the quality of referee and controversial decision.

Saroj Raut netted twice for Khumaltar including an opener in the seventh minute. He made it 2-0 in the 36th minute. Khumaltar netted its third goal two minutes before break with goal coming from Niresh Dulal.

Mahabir cut the goal deficit in the 63rd minute after Bikash Gurung converted penalty. But Sabir Chaudhary restored three goal lead in the 82nd for Khumaltar and gave a huge blow to Mahabir's hope of comeback. Umesh Thapa though scored second for Mahabir in the stoppage time it was too let for his side.

After a win over relegated Mahabir, Khumaltar has collected 15 points and moved to seventh position.

In the first match played at the same venue, Madhyapur Youth Association registered a 2-1 victory over Nayabasti Youth Club to increase its chances of survival.

Madhyapur scored as early as in the fourth minute after Nishan Basnet achieved the target. Mohan Gurung scored equalizer in the 23rd minute for the Nayabasti. Bhison Gurung restored Madhyapur's lead s in the 40th minute which turned to be decisive.

Madhyapur has now 13 points from 12 matches and is level on points with ninth place Tushal and Nayabasti.