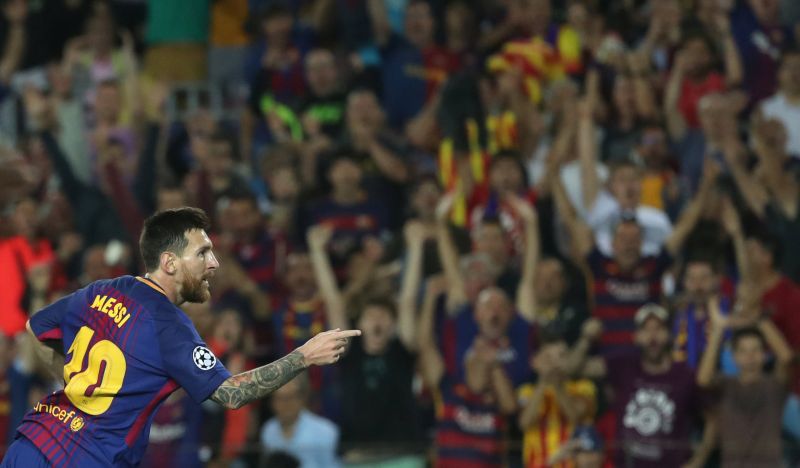 BARCELONA, September 13: A mesmeric Lionel Messi scored twice as he inspired Barcelona to a 3-0 win over Juventus to get off to a flying start in Champions League Group D on Tuesday avenging last season’s quarter-final elimination by the Italian champions.

Messi broke the deadlock on the stroke of halftime by playing a slick one-two off Luis Suarez and arrowing the ball beyond Gianluigi Buffon, finally getting the better of the veteran Italian in his fourth game against him.

The Argentine was also the catalyst for the second goal, forcing Juve to scramble the ball off the line and allowing Ivan Rakitic to shoot into an empty net in the 56th minute and add to his strike against Juve in 2015 final.

But Messi was far from done. For his second and Barca’s third he received a pass from Andres Iniesta and ripped more holes in a depleted Juventus defence before lashing beyond a dejected Buffon, scoring his seventh goal in three games.

Juventus, who were missing five key players including defensive warrior Giorgio Chiellini, looked a shadow of the team that beat Barca 3-0 on aggregate last season to reach the final, and have conceded seven goals in their last two games in the competition over two seasons.

Like Barca, Juve arrived at the game with three wins from three in the domestic league and with their own Argentine Paulo Dybala also in electric form with five goals in three games.

Miralem Pjanic did manage to trouble Barca goalkeeper Marc-Andre ter Stegen in the first half but the Spaniards, who have been facing instability off the pitch but look fresh and confident on it under new coach Ernesto Valverde, did most of the talking.

Messi gave the Italians nightmares from the word go, but captain Andres Iniesta was also in electric form, while record signing Ousmane Dembele had an impressive full debut, making for a party atmosphere at the Nou Camp to accompany the show put on by their relentless Argentine talisman.

“When we play at this speed it’s very difficult to play against us,” Rakitic told reporters.

“Barca don’t change coaches very often but now we have new ideas and we’re very happy with how things are going.”

Nepse increases slightly by 4.62 points, while daily turnover drops as low as Rs 1.474 billion on Monday
40 minutes ago