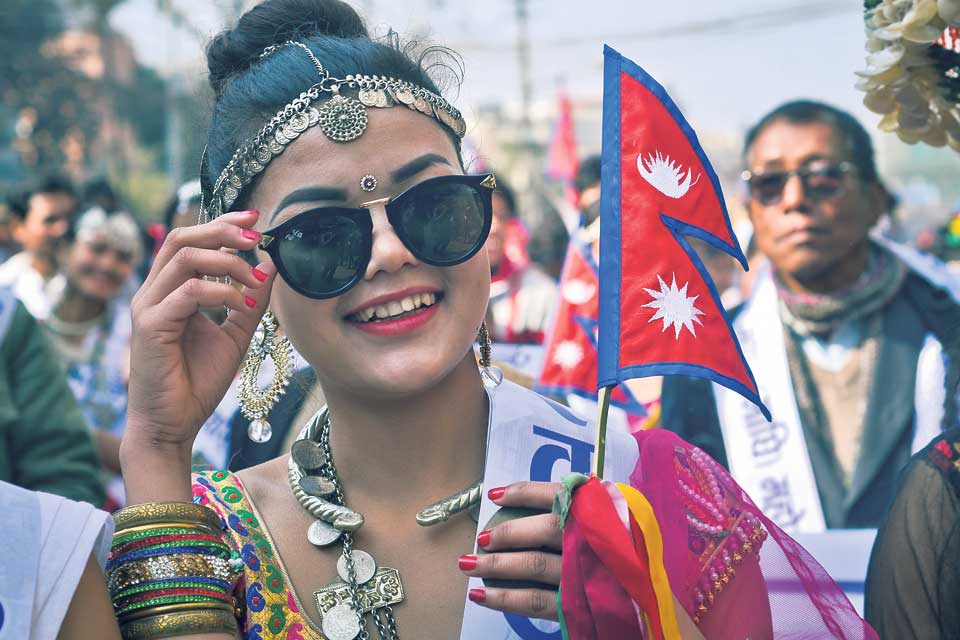 DANG, Jan 16: The people of the indigenous Tharu community have come a long way from a modest history of farm slaves. They wanted to be freed from the cruel slavery. “We could not even speak,” said Ram Prasad Chaudhary, a Tharu leader of Dang, referring to the condition of his people about two decades ago.

The first day of the Nepali month of Magh is special to the community. On this day, they celebrate the post-harvest festival known as Maghi. The culturally significant festival also started moving forward as Tharus’ movement for their rights.
Tharu rights activists started grabbing the opportunity provided by the festival to lay plans for the freedom movement. That is why the community takes the day as the day of emancipation for Kamaiyas and Kamalaris, the end of bounded labor slavery systems.
“As we used to be Kamaiya slaves, we celebrate the day as Kamaiya Mukti as it had paved the way for the abolishment of slavery,” said Ram Prasad. That is why this culturally significant festival is linked with their struggles for freedom.
On the day of Maghi festival on Monday, people of the Tharu community in Dang and other Tharu-majority areas in the western region celebrated the day with much fervor. They celebrated the day with traditional foods of different varieties and by getting involved in the Maghauta dance of the Tharu community.

The biggest festival of Tharu people was not only celebrated from the cultural perspective, but also as the day paving the way for their movement for freedom.
“In earlier years, Tharu people could not put their opinions in front of others,” said Ram Prasad. “Now they can do it with ease and confidence. This is a big change for the community following the restoration of democracy in the country.”

At present, local representatives of Tharu-majority communities have taken initiatives for making the Tharu language the official language for their local governance. The people of the community have taken it as another major achievement, according to Yogendra Chaudhary, another Tharuhat movement leader, who is affiliated with the ruling Nepali Congress.

“We had raised the issue of making Tharu an official language during our Tharuhat movement too,” he said. Likewise, he considered the public holiday on the festival as their other achievement. “All of these issues are directly connected with Maghi. The festival has fulfilled many of our political objectives.”

However, the issue related with ‘Tharu identity’ has not been resolved yet. A major demand of the Tharuhat movement was to make Tharu-majority places as a single political area in the form of a province, said Ram Prasad, lamenting the failure to materialize the demand.

Tharu protesters had demanded to include Tharu-majority areas from Nawalparasi to Kanchanpur in a single province. Yogendra and other Tharu leaders have taken the failure to meet this demand as a violation of their rights to identity.
“We could not come forward in politics as much as we would have liked to. The Madhes movement in the east made many achievements. However, the Tharuhat movement in the west failed compared to the achievements made by the Madhes movement,” said Yogendra.

DANG, Jan 16: The people of the indigenous Tharu community have come a long way from a modest history of farm... Read More...

BANKE, Jan 14: 85-year old Buddha Tharu of Baijapur village looks quite upset these days. The factor behind his unhappiness is... Read More...