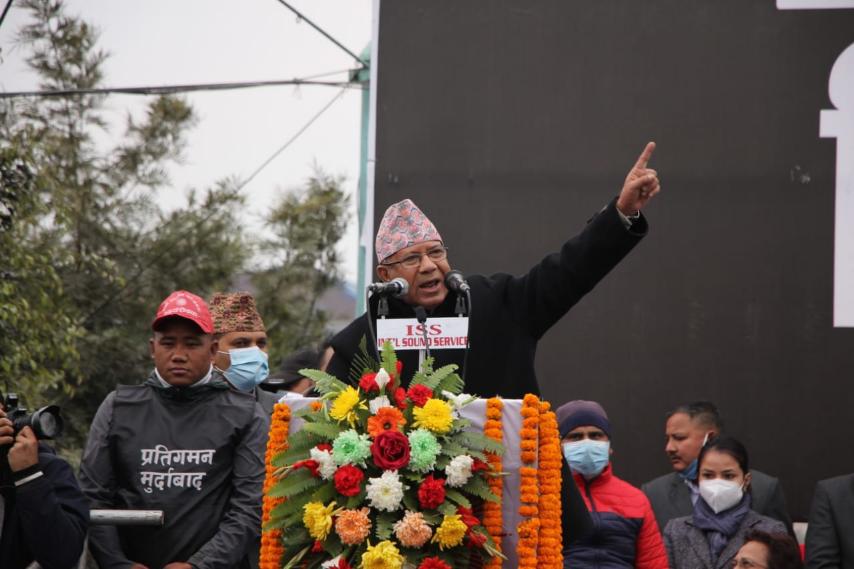 KATHMANDU, Feb 10: Co-chairman of Dahal-Nepal faction of the Nepal Communist Party (NCP) Madhav Kumar Nepal has urged the Election Commission (EC) to settle the authenticity disputes of the NCP on the basis of majority members of the party’s existing Central Working Committee.

Addressing the rally organized by his faction of the party against the dissolution of the House of Representatives (HoR) in the capital, Nepal also said that NCP’s document nowhere does recognize Oli as the first chairman of the NCP.  “Let’s organize a march-past of our party’s 440 Central Committee members. There will be hardly 100 members in favor of Oli, while there will be more than 300 in our favor,” said Nepal, while urging the EC to settle the dispute on the basis

Nepal also took strong exception to the remarks of Prime Minister Oli that EC cannot enter into the disputes of NCP since the election process has already started. During his meeting with the EC officials on Tuesday, Prime Minister Oli had asked the EC to expedite preparations for holding the polls instead of entering into the NCP disputes.

On the occasion, Nepal also said that no one including lord Pashupatinath would be able to save Oli now as he had derailed the constitutional process by dissolving the House of Representatives. “K P Oli has failed to understand this mass presence of people. K P Oli has now started chanting hymns of Lord Pashupatinath, forgetting the name of Madan Bhandari,” he said, adding that even Lord Pashupatinath won’t come to his rescue now for he has committed unforgivable crimes by dissolving parliament and endangering hard-earned democracy.

BIRENDRANAGAR, Jan 21: One of the two chairpersons of the Dahal-Nepal faction of the Nepal Communist Party (NCP), Madhav Kumar... Read More...

Revenue mobilization off the mark: Finance Minister Poudel
20 minutes ago

NC-proposed candidate must be made new President: Sharma
39 minutes ago

Why was the University Bill introduced, leaving aside the Education Bill?
59 minutes ago