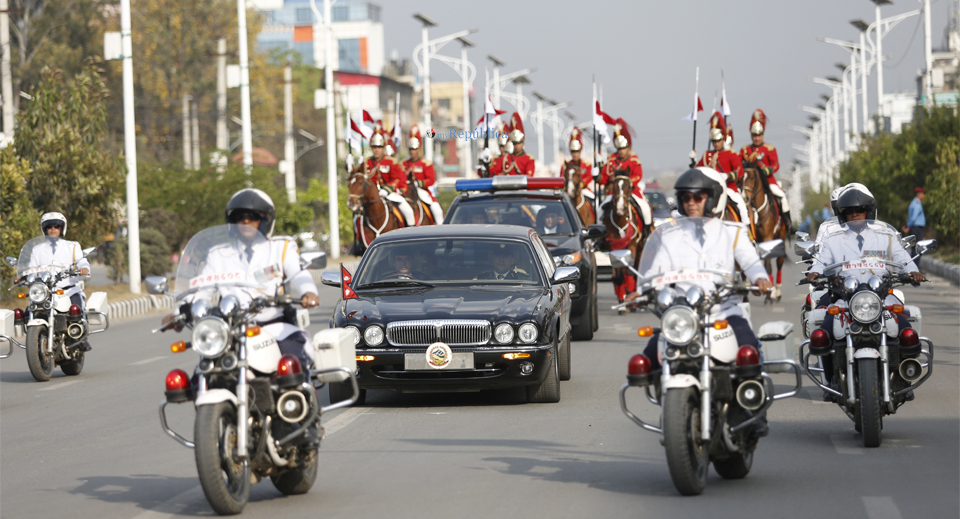 On the eve of International Women’s Day, Nepal’s first female president should have been the subject of pride and praise among people. The opposite happened this week. President Bidya Devi Bhandari became the source of public outrage. One controversy after another has already made her unpopular but Tuesday evening, people expressed rage against her openly. Scores of motorists flouted traffic instruction not to drive on the road which was blocked to facilitate a motorcade of the president.

A number of streets in the valley had been blocked to ease her motorcade, while she was being driven to Nepal Army headquarters, Bhadrakali from her official residence at Sheetal Niwas to attend Army Day reception. When the road blockade continued for long, people lost patience and they pushed through the streets defying orders of police on duty.  Soon the news went viral on social media and she was widely criticized. On Thursday, again, president raised public criticism when she visited Manakamana causing great inconvenience to hundreds of devotees including elderly ones, who were waiting in queue to offer worship to the deity.

Those in the queue started to rage against the obstruction. President was also seen to inaugurate a lift installed at the Bindhyabasini Temple in Pokhara the same day. And here again, she became the subject of huge public criticism on the social media. People commented that the president could have skipped the program that could have been inaugurated by a ward chairperson. These are the three incidents of this week but the president has been facing such situation in a troubling frequency.

For this, president and officials in her office need to maintain dignity of the state’s highest position and listen to the public. Why cannot Shital Niwas take the initiative, or even communicate with the home ministry, to ease vehicular movement during her motorcade? Why cannot the president herself consider the public inconvenience before planning the trip? President Bhandari is increasingly being compared with the institution of monarchy to dismantle which people fought with sweat and blood. This will be dangerous for future of republic. There are examples of heads of states earning public respect through their humble deeds in other countries. The president needs to maintain her dignity and dignity of her office. She needs to be able to say no to the activity that raises public anger against her. The first female president of Nepal should set a precedent that will make the people proud.

High in promise, low in substance

Most ministers in K P Sharma Oli’s cabinet have failed to do substantive works, which is why they, including Prime... Read More...

Who tricks the prime minister?

Heal the wounds, once and for all

Parliament has endorsed the government’s proposal to extend the terms of Truth and Reconciliation Commission (TRC) and the Commission of... Read More...