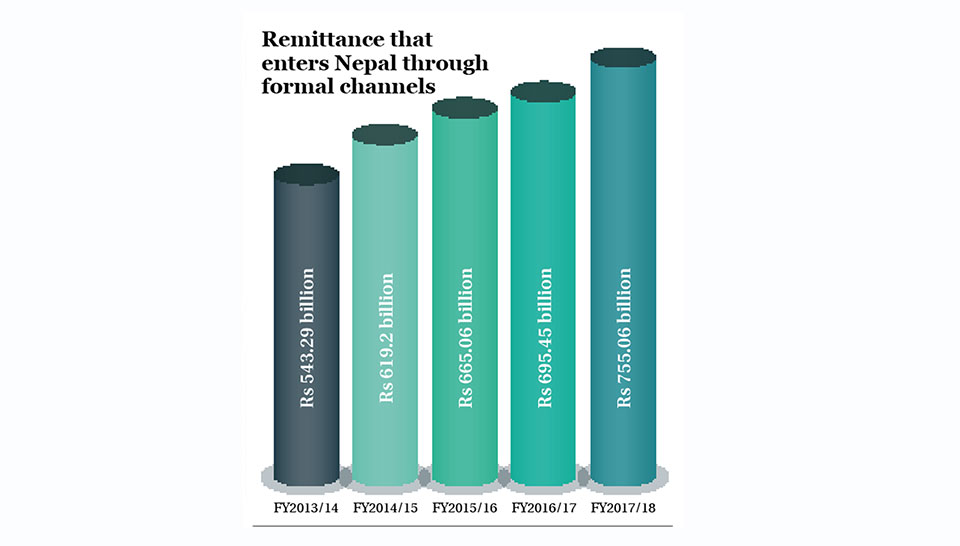 The taskforce was formed to recommend to the government measures for bringing remittances into the country through formal channel and utilize the workers’ transfers in productive sector.

Concluding that the high cost for Nepalis abroad to send their money home through formal channel was one of the major factors prompting many in foreign countries to use informal and illegal channels like Hundi, the taskforce has recommended several policy, structural and procedural measures to the government for curbing the growing use of informal channels.

The government had formed the taskforce seven months ago to provide recommendations for increasing remittances through formal channel and utilizing it in the productive sector. The taskforce was formed in the wake of growing concerns that the use of informal and illegal channels like Hundi was rampant. However, there is no estimation of remittances flow into the country through informal channels.

“On the other hand, remitting money from informal channel is not only less costly but also comes with added benefits like high exchange rate and delivery of transferred funds at the doorstep. It is because of these factors that migrant workers are using informal channels to sending their money home,” read a statement issued by the taskforce.

Issuing migrant worker card to outbound Nepalis, setting up integrated remittance management information system, putting the record of the remittance in such system, and providing reward points based on the money remitted are some of the recommendations given by the taskforce promote formal channel for remittances.

“Based on the reward, remitters can be provided different subsidies, and facilities like waiver and discounts on government services,” Dahal said, elaborating the recommendations made in the report.

Similarly, the taskforce has also recommended making it mandatory for each worker to open bank account before going for employment.

Among others, the taskforce has suggested to the government to incorporate a provision that requires transfer of remittances through formal channel while signing labor agreement with host countries.

Addressing a press briefing after receiving the report, Minister Bista said that the government will take into consideration the recommendations made by the taskforce to increase the use of formal channel for bringing remittances and channelizing them in the productive sector. “If we can increase flow or remittances through formal channel and use such funds in the productive sector, it can play a significant role in reducing the country’s widening trade deficit,” added Bista.

Nepal received Rs 755.06 billion in the last fiscal year 2017/18, according to the central bank. The ratio of remittances to the GDP stands at 25.1 percent.

Examples from Latin America and Central Asia suggest over-dependence on income from remittance can be risky. ... Read More...

2,351 new cases of COVID-19 recorded across the country in past 24 hours, cases doubling every four days
1 hour ago

Will China Be the Middle East’s Next Hegemon?
9 hours ago