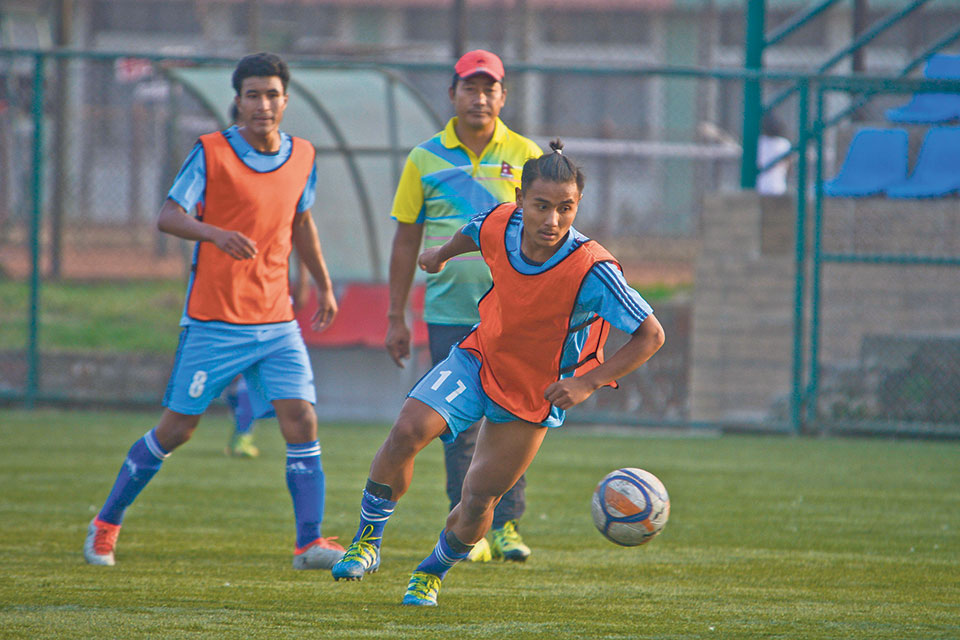 Photo Courtesy: Bijay Gajmer Players of U-19 football team during their training at ANFA Complex, Satdobato in Lalitpur on Tuesday, in this file photo.

Lopsang has made four changes in the team that had lifted SAFF U-18 Championship a month earlier in Bhutan.

Similarly, goalkeeper Sandesh Gurung, midfielder Ram Wojee, and striker duo Rajiv Lopchan and Deepesh Ale Magar who were part of the title-wining team are left out.

Lopsang has called three goalkeepers, eight defenders, seven midfielders and five forwards in the team for the qualifiers to be held in Kyrgyzstan from October 31 to November 8.

Nepal, pitted in Group A, will begin the qualification campaign taking on host Kyrgyzstan on October 31 and will take on Bahrain two days later. Likewise, the Nepali young team will compete against UAE on November 4 and Oman in its last match on November 8.

Lopsang, who guided Nepal to the SAFF U-18 Championship title, said that the continental qualifiers will be tougher than the regional tournament. “The opponents in the AFC Qualifiers are much stronger than the South Asian sides. We will have to try hard in order to qualify for the final round, which is our primary target,” said Lopsang.

A total of 43 Asian nations that are divided into ten groups are competing in the qualifiers. Top two teams from each group will join host Indonesia in the final round next year.

However Lopsang is hopeful of producing positive results in the qualifiers. “Although these teams play higher level football at senior level matches, age-group tournaments are different. I am hopeful of my team giving them a tough fight,” Lopsang said.  Nepali young team will leave for Kyrgyzstan on Sunday.

KATHMANDU, Oct 23: The Rastriya Prajatantra Party (RPP) has finalized its candidates contesting the first phase of the House of... Read More...

There is no point in asking for resignation of Working Committee: CAN President Chand
42 minutes ago