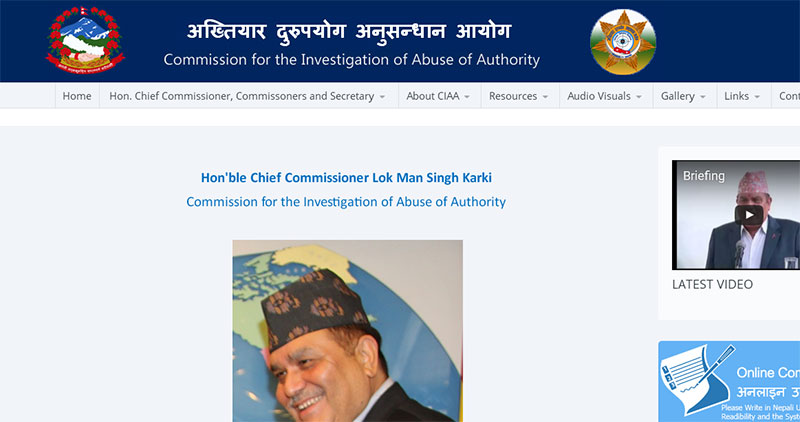 KATHMANDU, Oct 21: Two days have shot by since the Chief Commissioner of the Investigation of Abuse of Authority (CIAA) Lokman Singh Karki was suspended from the post after an impeachment motion against him was registered at the Parliament Secretariat.But according to the CIAA official website, he is still the Chief Commissioner.

Following Karki's supension, senior most  CIAA Commissioner Deep Basnyat was appointed as the acting chief commissioner of the anti-graft body on Thursday.

However, Karki's name as the CIAA chief has not been removed from the website.

Though a scrolling notice appears at the top that the website is under maintainance, many wonder how long it would take to remove Karki's name and picture from the site.

As many as 157 lawmakers (107  from CPN-UML and 50 from ruling CPN (Maoist Center) had filed an impeachment motion at the Parliament  Secretariat on Wednesday evening.

If the motion is passed by at least a two-thirds majority of the total number of the members of the House of Representatives, Karki will be relieved of his office.

KATHMANDU, July 22:  The Good Governance and Monitoring Committee of the Legislature-Parliament has directed all the Commissioners including the Chief... Read More...