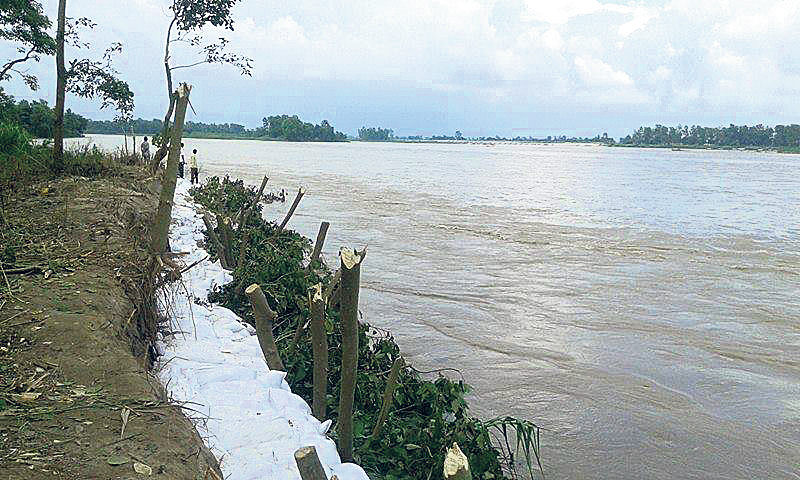 Sandbags placed by the locals of Shahipur village of Tikapur along the Karnali River to minimize the erosion of the bank by the swollen river in this recent photo.

TIKAPUR, Aug 1: The Karnali River has begun eroding its bank and nearby lands in Shahipur-3 of Tikapur, spreading fear of inundation among the locals.

More than 500-meter stretch of land in the western bank of the river along Shahipur village has already been eroded by the river. The river may enter into the village anytime, locals say, adding that they fear their properties might be damaged by the river.

Locals have taken precaution by placing sandbags along the bank of the river to control further erosion of land. This, however, will not be enough in bringing the erosion under control, said Bharat Bahadur Saund, a local of the village. There should be better structures for the long-term solution to the problem, he added.

If the erosion does not stop, there is a possibility of the river entering Shahipur and then submerge other neighboring villages like Simareni,Narayanpur and Ghansihpur, according to a local resident Singh Raj Budha Magar.

The locals are having a hard time controlling the erosion as the water level is still high.

Another local Ishwor Rawal said that the locals alone cannot control the erosion. “Authorities should step in to build embankment as soon as the water level recedes,” he said.

The locals, who have been working all day to control the erosion, have not been able to sleep at night due to fear of being swept away by the river.
“The river has been eroding the bank day by day,” said Dharma Raj Sharma, chairperson of Sahipur Karnali Community forest.

Two years back in 2070, the overflowing river had entered a village two kilometers downstream from area affected at present. Around 200 families had been displaced. Those families are still living in nearby forest as squatters.

“Lots of people had been displaced two years ago. We are also afraid of a similar predicament,” added Sharma.

Khatri said that plantation of trees alone was not enough to stop the erosion. He said that embankment was essential to curb the problem.

KATHMANDU, June 27: A dead body has been found at the river bank in Makalbari of Bauddha on early Wednesday. Read More...

KATHMANDU, June 13: A bill at the parliament to amend the Banks and Financial Institutions Act (BAFIA) could pave the way... Read More...