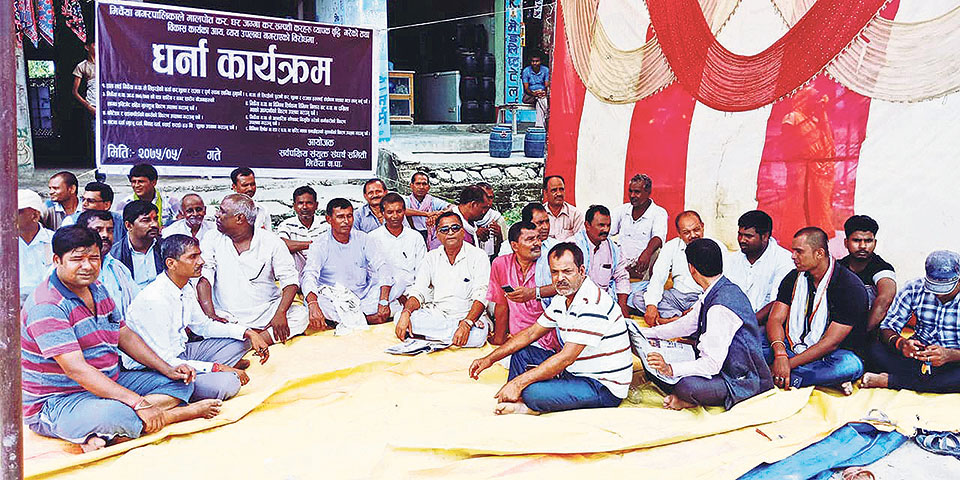 SIRAHA, Sept 6: After struggling with the lack of transparency, mismanagement, irregularities and various other difficulties for almost two decades, the announcement of local elections had brought a huge respite to locals. However, a year after the polls, the same locals have started taking to the streets against the newly formed local government.

Venting their ire against the local units for imposing hefty taxes and not maintaining transparency, locals of Mirchaiya Municipality started protests from Tuesday. Entrepreneurs, politicians and common people staged a sit-in in front of the municipality office on Wednesday making various demands.

Demanding that the randomly increased tax be reviewed and the expenditure details of last year be made public, the protesters have forwarded an eight-point demand. They have also stated that they will continue their protest until September 12.

"If we are paying exorbitant taxes, we should get better services," said Ashok Kumar Sah, adding, "How can they increase the tax without providing services?" According to him, the government has been extorting from the poor and middle class people in the name of tax.

Locals have urged the local units to make the registration of birth, death, marriage, migration and various other incidents free. Earlier, locals had submitted a memorandum to Mayor Shrawan Yadav with these demands. However, the mayor had promised to make decisions on these issues within August 31. But he failed to do so.

Imported chemical fertilizers being supplied to districts
22 minutes ago