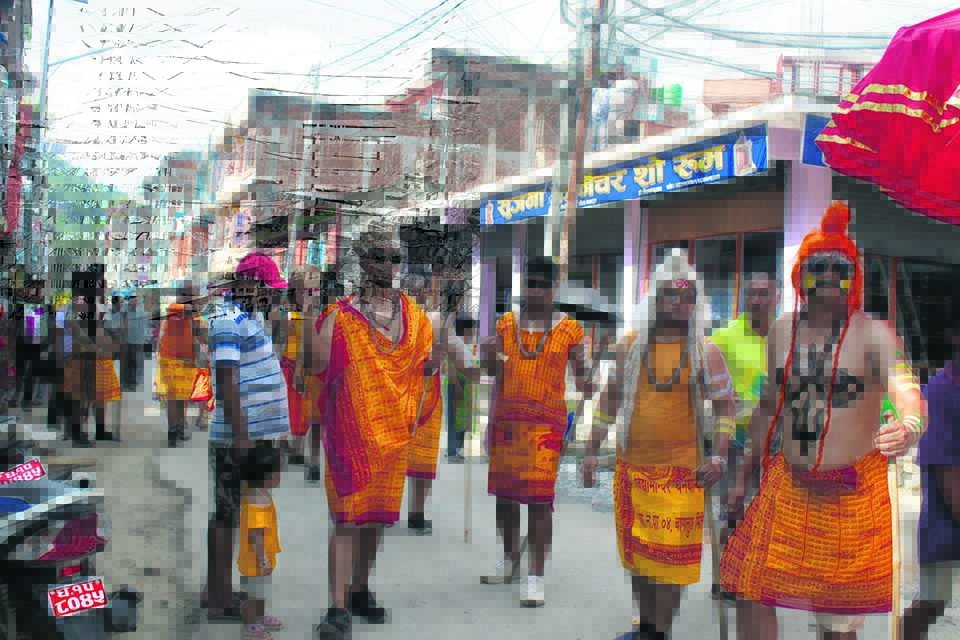 BAGLUNG, Aug 24: Decked up in yellow robes with garland of Rudraksha around their necks, a group of young men dressed up as sadhus or holy men held a procession in Baglung on Friday.

Onlookers not just watched them with awe, but many went near the ‘jogis’ to seek blessings. The men danced and sang while moving forward making the scene mesmerizing.

The men were performing the ‘Jogi Naach’, a form of ancient dance which was once popular in Bhaktapur. Interestingly, the dance is performed only in Baglung these days. Baglung had adopted this tradition from Bhaktapur more than 250 years ago.

As a part of the Jogi Naach, the sages enter different households asking for offerings. Those who get the opportunity to serve the sages consider themselves fortunate.

According to culture expert Mukunda Shakya, who is also a former president of Shakya Kalyan Samaj, the Jogi Naach is in practice only in Baglung.

“Several other forms of dance including ‘Bhadarure Jaatra’ are still in practice in many other parts of the country. But if you talk about this very dance, it’s now practiced only in Baglung. If we stop performing it here, it will remain only in history books,” he said.

According to Shakya, there is no clear evidence or description of how the Jogi Naach started. Regarding its entry in Baglung, it is said that the then ruler of Parbat who was interested in manufacturing weapons invited some skilled men of the Newar community from Bhatkapur to Baglung.

“It is believed that the same workers started this dance in Baglung. Now it’s the seventh generation of those men who have been performing the dance. It has been 250 years,” he said. “There are some written testimonies to back this tale.”

Shakya further elaborated about the dance. Just a casual tapping of feet doesn’t work, he said. “One has to learn it carefully. There are some subtle steps. It might look that they are simply swinging their bodies, but the dance is actually tough,” he said.

The paintings in human body is another interesting part of this tradition. Those who take part in the dance have to follow certain rituals prior to the decorations.

According to Gangalal Shakya, a local cultural enthusiast, the Jogi Naach a part of the Bhadaure Jatra and it is symbolically the end of all different processions.

“The Jogi Naach means we are done with all the worldly roles and responsibilities and now it’s time to go for the final pilgrimage,” he said.

Jogi or a saint means the one who has abandoned all worldly attachments for the ultimate liberation.

Blessing from real jogis is believed to lead a normal person to the path of spirituality. “So, jogis are quite revered and welcomed. More so when they are part of such a precious culture,” noted Gangalal.

Although jogis are meant to inspire spirituality among others, the reason they are made to march in the market is however for financial gain, according to cultural expert Shakya.

“One is the cultural aspect, which can be associated with spirituality, and the other is the commercial aspect,” he said. “This annual dance also helps keep the town vibrant in many ways.”
According to him, it is very challenging to conserve old traditions and culture these days. The virtual world of internet has shifted people’s interest.

“We have been trying our best to give continuity to the dying traditions. It is very important to conserve such practices. Locals here are aware of that but yet it’s not easy,” he said.
Johan Bajracharya, president of Baudhha Yuva Sangh, Baglung meanwhile stated that they have been trying to allure the new generation to such jatras.

“We die one day, but our culture and tradition should outlast our mortal body.
They should be passed on to the upcoming generations. We are trying to train youths for this purpose,” he said.