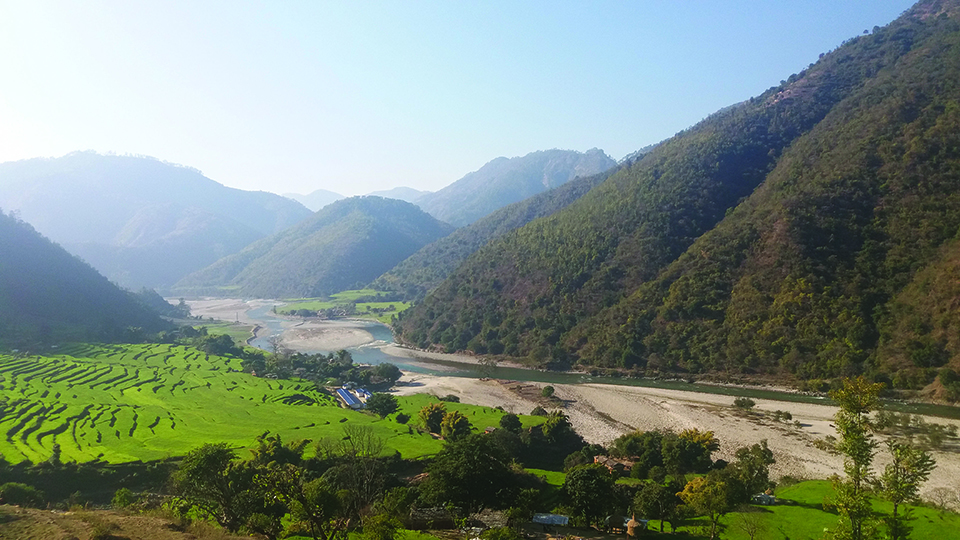 Arun Bam/Republica Talara area of Doti district and Dhungad area of Baitadi district are seen in this picture. These areas will be submerged if the West Seti Hydropower Project water dam is constructed.

DIPAYAL, July 15: Prime Minister KP Sharma Oli's visit to China in June had elated residents of Province 7. They hoped that the visit would be able to make some headway in implementing the West Seti Hydropower Project. Nearly a month after the visit, those residents are expressing dismay about the fate of the project. They say that their hopes for the project have wane considering the fact that the project was not discussed during the PM's visit.

"We were hoping that the PM's visit would definitely make progress in implementing the project. However, nothing substantial was reported on the issue in the media. If the project did not get any headway even during the PM's visit, there is no point in expecting the project to materialize," noted Tek Bahadur Singh, a resident, who would have directly benefitted by the project.

"As the PM failed to utter a even single word about the project, we have become pretty sure that this project is going to be dumped. They will never try it again," he added.

Locals had shown concerns after they felt that the developer of the project, China Three Gorges Corporation, was showing disinterestedness in the project. Subsequently, they had urged the government to do needful for materializing the project. Locals expected that the hydro project would greatly help them to come out of vicious cycle of poverty. The project would directly benefit residents of Doti, Dadeldhura, Baitadi and Bajhang districts.

Locals have been talking of the project since the past four decades. During this period, the government had even discussed relocation and compensation plans. However, the discussion trailed off, with no substantial headway towards implementing the project.

“For us residents, it was our ticket to prosperity. We were so excited thinking of the prospects it would provide to us. This decade-long wait has taken all our excitement and now we don't think that the project will ever materialize," he added.

Another resident, Nara Bahadur Mahara also shared similar sentiments. The seventy-year-old stated that he was in his hey-days when he first heard first about the project and said it was sad to have become old without seeing the project implemented.

For us residents, it was our ticket to prosperity. We were so excited thinking of the prospects it would provide to us. This decade-long wait has taken all our excitement and now we don't think that the project will ever materialize. -Tek Bahadur Singh, Doti district resident

"I was young and strong then. They talked a lot about the prospects for us from this project. Now I am already 70 and I feel that it will be not implemented, at least while I am still alive," he said. "Even after I am gone, I am sure the politicians will never implement the project. They are not eager to do things that benefit people and the country. They only make tall promises and do things that benefit them," he fumed.

"We were sad to know that the government was not able to reach a deal with Australian or the French company for developing the project. However, when the Chinese company expressed its interest and initiated rounds of discussions with authorities, we were once again hopeful. But now we can say nothing about it," he added.

"We do not understand the agreement that the government makes, what the government itself does and plans and why the companies abandon and walkout after some years. People like us who are largely affected by it, continue to suffer," Singh lamented. "If they declare that this is not going to happen, that would rather be better for us. We could get some direction in life. The delay and confusions have made it really difficult for us," he added.

People are unhappy also because they are not yet among those who enjoy uninterrupted power. In most of the places of the region, power is still a farfetched dream. If the project becomes a reality, it would power their houses and ensure better power supply.

"Many people here are living in darkness, there is no power supply. A whole generation that expected to see the project materialize their whole life will pass away soon without ever seeing it," remarked Singh.