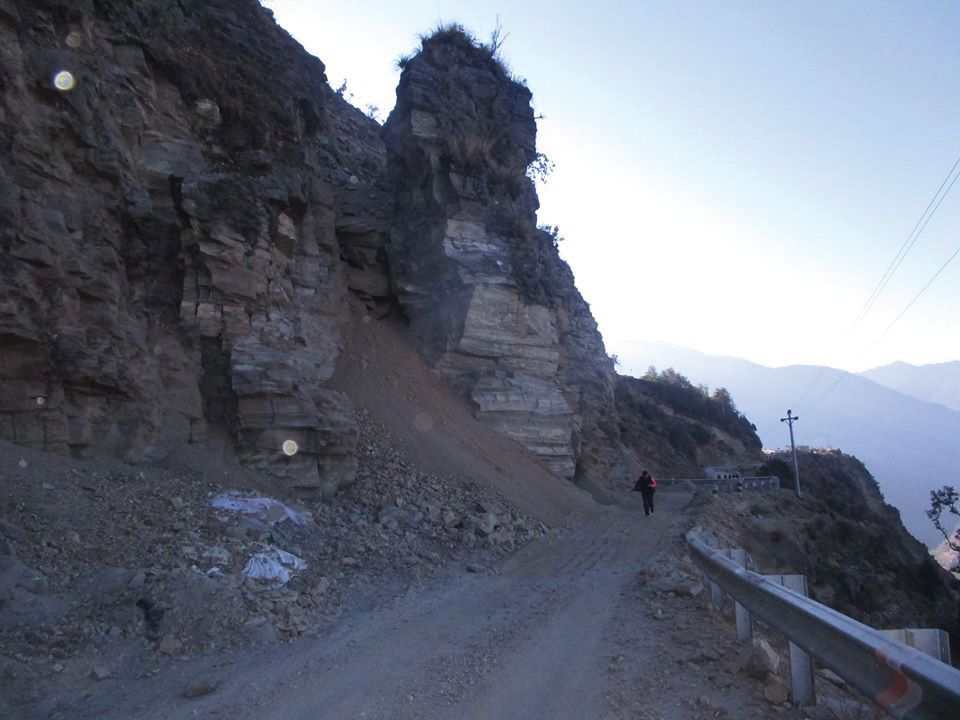 A part of Nagma-Gamgadi road section of the Karnali Highway, Jumla in these recent pictures. | Photo: Republica

JUMLA, Oct 27: In the last one decade, road networks have expanded remarkably across the country. Towns and villages in the hills, plains and mountains have got new motorable roads. With the local government taking charge last year, even remotest areas have begun to feel the change. However, this development indicator has not been able to make everyone happy. Failure of concerned authorities to ensure quality while constructing road has turned people’s joy into worries and troubles. The concerns have been so grave that in some places in Jumla, locals have tried to intervene and correct things before it was too late.

After feeling that very low quality construction materials were being used in the graveling of Nagma to Gamgadi road section, locals came forward to draw the attention of authorities concerned. The locals took the measures after they felt that the construction materials piled on the roadsides were of poor quality. Prior to that, the locals have been cautioning concerned authorities and contractors for using quality construction materials. However, when they realized that their concerns were not being addressed by local authorities, they wasted no time in reaching out to federal lawmaker Gajendra Bahadur Mahat recently while he was on a field visit to inspect the construction of the road. They piled pressure on lawmaker Mahat to take necessary action against those involved.

Along with Mahat, lawmaker of the federal parliament Padam Bahadur Rokaya was also at the site. The duo was surrounded by locals who asked them to probe the matter. Stating that the road is not for short term use, they called on the lawmakers to do the needful for ensuring the quality of the road.

Following serious public concern, Rokaya instantly directed the local authority for investigating the issue. He directed officials to take action against the contractor for using low quality materials. He also warned the road department, the technicians and the local officials to do their work properly.

Later, the lawmakers called meeting of all stakeholders to draw attention over the matter. This section of the Karnali Highway is narrow and the demand for its expansion and graveling has been a longstanding demand of the locals. Speaking at the meeting Mahat said that the road is of high importance to the people and negligence in constructing it won’t be tolerated.

“Despite having a road, people are not able to use it because it’s not constructed poorly. This graveling is done to upgrade the quality of the road, but if they are doing it just for name sake, it gives no respite to people,” Mahat said. “It is very sad to know that despite of being so much importance to people, the road was being constructed with low quality materials. The public raised its concern very much on time.  We have directed authorities concerned to check things minutely,” he added.

Among others, the road connects Rara Lake and the Sinja valley. Huge number of tourists visit those areas every year. While reiterating these facts to highlight the importance of the road, Mahat insisted that the local government should be very careful while upgrading the road. “Thousands of passengers travelling through the road have been suffering due to its poor quality. There have been many accidents owing to poor quality of the road. Now as the road is being upgraded, due attention must be given in order to ensure that the new road is built well,” he said. He added that locals and the authorities concerned should continue pilling pressure on the contractor.

Meanwhile, Rokaya stated that the road should be built with an aim to last at least two decades.  “This is not a rural, sub track. It is a very important road section. So, once upgraded, it should last at least for 20 years,” he said.

“We cannot witness or withstand negligence over such matter. We all should keep our eyes and ears open regarding any kind of developmental work around us. And when we find anything going wrong, finger should be pointed out and stop anyone any wrongdoing,” he added.

Rokaya asked the local government to check the construction material and take action against the company if it is found guilty. “Technicians, engineers, local authority officials, all should be punished if they are found guilty or continue negligence,” he said.

The road upgrading is done by contractorsm Thodung Construction Private Limited and Hingdung Thok Hira Namita JV Private Limited. Following protests from the locals, the contractors have been directed to review their working procedures and construction materials. According to Chief District Officer Bishnu Poudel, the road section is under its scrutiny. “We are observing progress of the construction minutely. The contractors have been already told to upgrade the road using quality materials. The office will take action against them, if they don’t abide by the contract’s terms,” he said.

Amid lockdown, vegetable market and groceries resumed in Gaur (with photos)

RAUTAHAT, March 27: In a bid to ease the smooth supplies of vegetables in the district headquarters, the Rautahat district... Read More...