Local authorities ordered to work with DDRCs for rescue and relief 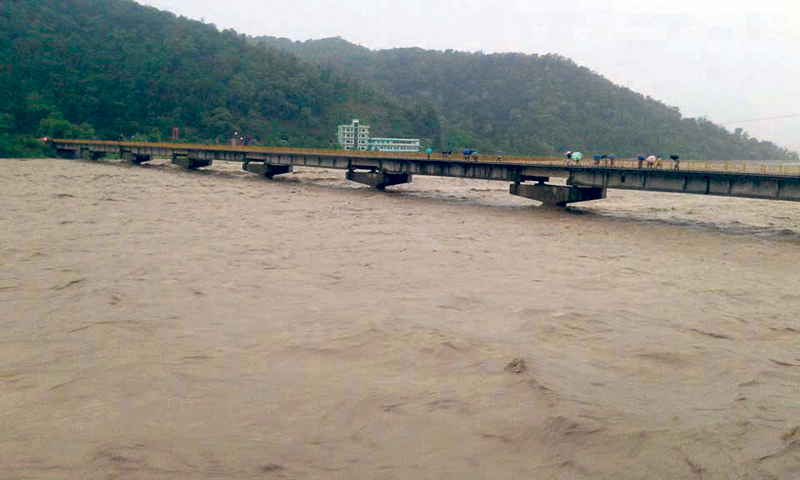 Lawmakers criticize govt's 'feeble response'
KATHMANDU, July 27: The government has directed the authorities in the districts to cooperate with the district disaster relief committees (DDRCs) to make effective the search, rescue, relief and rehabilitation efforts in the flood and landslide affected areas across the country.

A meeting at the Office of the Prime Minister and Council of Ministers (OPMCM) directed all the ministries to ask their district-level authorities to assist in the search, rescue, relief and rehabilitation efforts of the DDRCs in the flood and landslide affected areas.

In a press statement issued Tuesday, the OPMCM has stated that it has also asked the ministries not to grant leave to  civil servants at district-level offices for any reason and ask them to leave no stone unturned to make the search, rescue, relief and rehabilitation efforts effective in the landslide and flood affected areas.

The OPMCM's directive to all the ministries came after floods and landslides killed at least 36 people and left 26 others missing over the last two days in various parts of the country. Likewise, lawmakers in parliament on Tuesday had criticized the government for its delay in the search and rescue of the victims.

Officials at the OPMCM said the directive was issued to all the government agencies in the districts as the DDRCs in the affected districts alone cannot effectively carry out the search, rescue and relief tasks.

According to Republica correspondents, at least 36 people have died in landslides and floods in Pyuthan, Palpa, Baglung, Kathmandu, Makawanpur, Gulmi, Arghakhanchi, Dolakha, Sarlahi, Rupandehi districts while at least 26 have gone missing in Pyuthan, Baglung, Saptari, Sunsari and Jhapa districts.

Yadav Koirala, spokesperson of the home ministry, said that the ministry has already mobilized teams of security personnel in the search and rescue operations in the affected districts. “Locals affected by landslides and floods in many areas have either been relocated or are in the process of relocation to safer places. Likewise, the search for the missing individuals is also under way,” he said.

He said that the ministry has already directed all the district disaster relief committees in the districts to evacuate the settlements on the bank of Narayani River and relocate them to the safer places for the time being.

Meanwhile, lawmakers criticized the government's "lack of prepadeness" for coping with damage in areas vulnerable to floods and landslides. Speaking in the special hour in parliament, lawmakers from various political parties also came down heavily on the government's delay in search and resuce efforts.

Shiva Kumar Mandal, lawmaker of CPN (Maoist Centre), said that the government remained apathetic even though many villages in Morang and other districts in the Tarai have been inundated. “I request the government to use all possible measures to cope with the disaster,” he added

Likewise, lawmaker Baijanath Chaudhary of the ruling CPN-UML also criticized the government's "feeble response" in coming to the rescue of flood and landslide victims to safer places.

NA chair urges all to join hands in relief and rescue