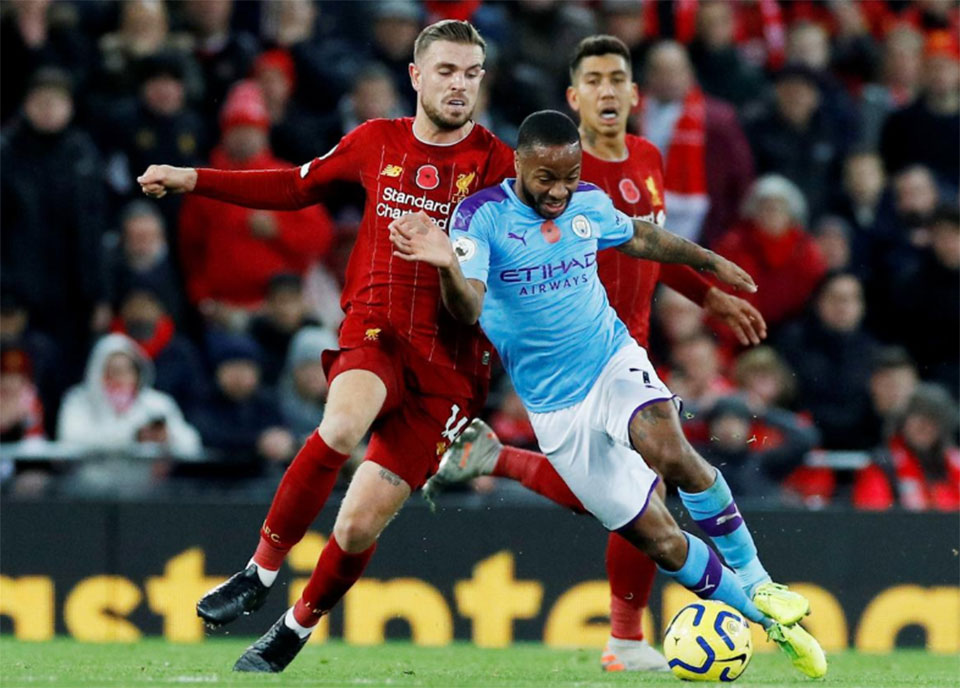 LIVERPOOL, England, Nov 11:  Liverpool opened up an eight-point lead at the top of the Premier League with an emphatic and hugely impressive 3-1 win over defending champions Manchester City at Anfield on Sunday.

The victory, sealed with goals from Fabinho, Mohamed Salah and Sadio Mane, leaves unbeaten Liverpool on 34 points from 12 games, eight ahead of Leicester City and Chelsea, and nine in front of Pep Guardiola’s fourth-placed City.

While talk of decisive results in November, with 26 games of the campaign remaining, is premature, the manner of Liverpool’s win over a team which has dominated the league for the past two seasons was certainly a declaration of intent.

“The boys were completely focused and concentrated. It was so good,” Liverpool boss Juergen Klopp said.

Anfield exploded when Liverpool grabbed a sixth-minute lead with a thundering drive from Brazilian Fabinho, who pounced on a poor clearance from Ilkay Gundogan and blasted past Claudio Bravo from over 20 metres out.

Yet City felt the stunning effort should have been ruled out — and a penalty awarded to them — as prior to the break that led to the goal Liverpool defender Trent Alexander-Arnold appeared to handle the ball inside the box but the VAR review went against the visitors.

It was the latest VAR controversy in the Premier League and is certain to spark more debate, but while the opening goal set the tone, Liverpool’s dominance was soon evident all across the field.

City pushed forward in response and Raheem Sterling missed a close-range header, but Liverpool struck again in the 13th minute when Andy Robertson crossed from the left and Salah nodded the bouncing ball past Bravo to make it 2-0.

Juergen Klopp’s European champions, without a domestic league title since 1990, now had a firm grip on the game and caused constant trouble for City’s shaky defence with their powerful surges forward.

Liverpool were on top physically and their pressing stopped City from establishing their usual possession game but still they managed to carve out some openings.

Sergio Aguero, who had a disappointing game, forced Liverpool keeper Alisson Becker into action in the 25th minute and then the Argentine should have done better three minutes before the break when he shot wide after being fed by Kevin De Bruyne.

Guardiola needed to adjust something at the break to find a foothold in the game but City’s third defeat of the season, after losses to Norwich City and Wolverhampton Wanderers, was assured when Liverpool made it 3-0 six minutes after the interval.

Jordan Henderson superbly worked space on the right flank and whipped in a cross which Mane dived to head home at the back post.

Bernardo Silva pulled a goal back for City in the 78th minute, drilling home a low cross from Angelino and the visitors enjoyed some late pressure but it was too late for a comeback from the champions.

City have not won at Anfield in the league since May, 2003 — their only win at Liverpool in 38 years, but manager Pep Guardiola took positives from Sunday’s performance.

“It’s not easy after being two goals down to react the way we reacted. It was one of the best performances I have ever seen from my team. That’s what we needed and hopefully we can continue to make the steps we need,” he said.