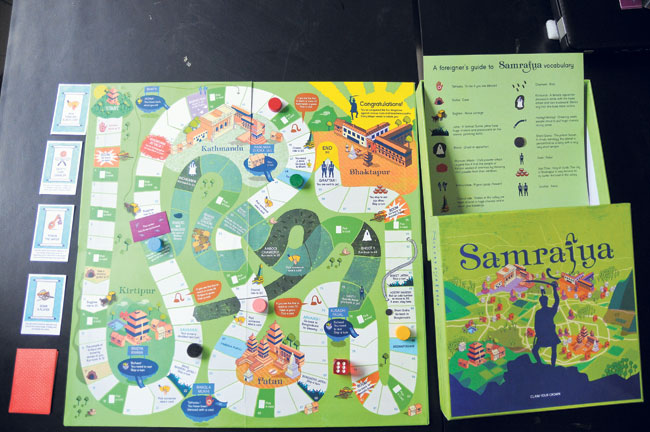 Kreeti Shakya and Manish Shrestha from Kazi Studios explain that the idea basically came about from yet another boring get together. If the guests weren’t glued to their smart phones, checking their Facebook feed or snap-chatting, then they were simply eating in their own little corners. So in their own simple way, they thought of an idea that could help build up the interactions and spice up the Nepali gatherings.

Cue in, Samrajya, Nepal’s very first board game. The silhouette of Prithvi Narayan Shah looms over the box cover, with his sword raised high over his head, an apt introduction to a game that is about conquering our valley. Here the players (ranging from two to six) trace the historical path of his conquest starting from Kritipur, Kathmandu, going all the way to Patan and Bhaktapur.

The culture of playing board games may still be new to most Nepalis especially adults, but spotting the well-known locations, landmarks, and legends in form of a game is bound to make anybody interested. The Week met up with Shakya, creative director at Kazi Studios and Shrestha, their head of business development, to talk about it all.

Many may consider this as rather random, why a board game? Did you ever worry that the idea may not sell?
(M) We are both avid board game fans. We have played many and enjoyed them thoroughly as well. We had been toying around with the idea of developing our own game for a while before coming up with Samrajya. For instance, we had developed a prototype of our own version of Settlers of Catan called Settlers of Patan. Nepal has so many original and fascinating legends associated with it that it effortlessly fits into the nature of the games.

Board game culture may not have quite taken off here but there is certainly a lot of potential. It’s also not only the lackluster get-togethers either. If you walk around the gallis of our town, we still find kids and adults alike gathered around various games of chess or cards and such. We thought if we build upon a game like Ludo that everybody is familiar with, the game would eventually catch on.

So how has the response been so far?
(K) We just recently had to make more copies of the game. Initially, we had more foreigners and expats buying Samrajya. But through the art market and other outlets like One Tree shop, Timro concept and others, we now have more Nepalis as well. They seem to consider it as a good gift item. We have adults who want to take it abroad with them as well as mothers who want it for their kids’ birthday.

The game is basically for people of ages six and above. The kids might play it more simply as perhaps a ludo game but the adults can use the cards, the options, strategize their moves and make it more interesting for themselves.

Could you elaborate on how it can be played a little more?
(M) To start with, the locations have been picked such that it is the route that Prithivi Narayan Shah took to capture the valley. Throughout the path there are various scenarios. The players may get stuck in some Jatra or encounter people from Kirtipur throwing stones at them or a Khursani attack. These are all little nuggets of our history. They had actually happened. We consulted historians on the matter to make it a part of the game.
Now we do roll a dice and move the play pieces but things aren’t only about chance here. The other feature is the deck of cards. This is what adds the element of interaction with other players. The cards have a variety of other scenarios where, for instance, you can switch places with another player, go a couple of steps ahead or back, launch a khukuri attacks and such. If you play these cards right that can be the key to winning the game or, at least, holding other players back. This is where your strategizing skills come in.

How does one develop a board game? What was the process like?
(K) It took us four to five months to roll out the final version of the game. There were multiple prototypes before that. We gathered people together, played and factored in the feedbacks. In the initial stage, at times it took us two hours to finish a game. We knew we would have to simplify it so that it would be easier for people to learn and adapt.  Developing a board game certainly takes commitment.

We had to put in a lot of work but having a diverse team helped. We have engineers, IT techs, young interns, and even a mother who knew what kids respond to.  Everybody bought their own different perspectives and ideas to the table. When we were brainstorming there was never a bad suggestion. Then the team would test it on our own group of friends and acquaintances as well. We worked on the graphics and the designs much later.

Do you think the trend of board games will catch on?
(K) We have already started working on another new board game. We want to root it in our Nepali society and culture but we are planning to make this a little more complex, for ages 12 and above. We are thinking about coming up with an adult version of Samrajya as well, something like a drinking game.

It’s only a matter of people discovering how fun these board games can be. We have had a friend call us up at 11 in the night, curious about how they should move ahead after being stuck in a situation. It’s such a great way to exercise your mind as well as bond with family and friends.

For more information, you can visit facebook.com/samrajyathegame

Games begin in full, with US teen on target for 1st gold