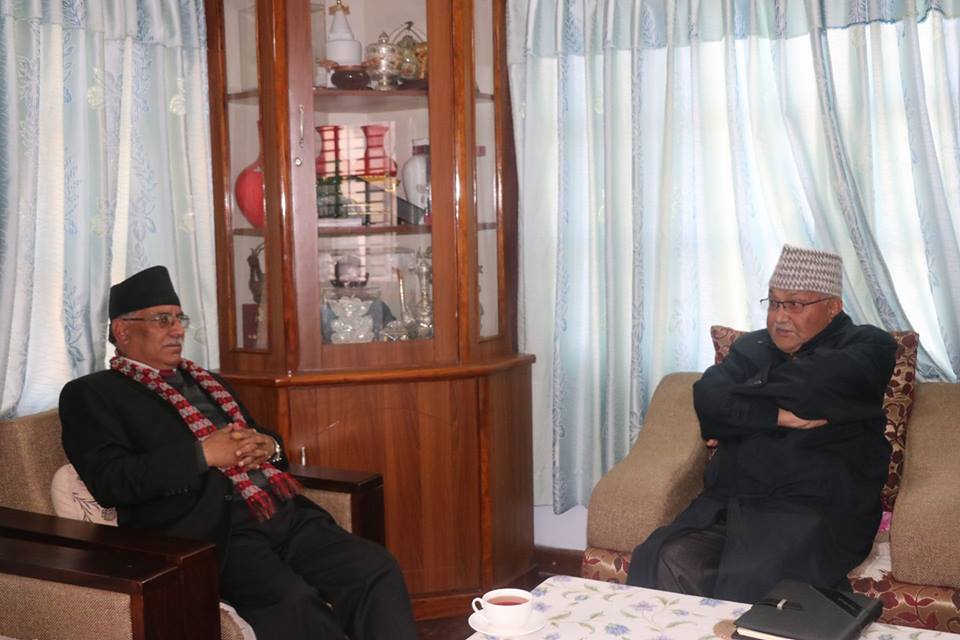 KATHMANDU, Jan 21: A meeting between CPN-UML Chairman KP Sharma Oli and CPN (Maoist Center) Chairman Pushpa Kamal Dahal on Saturday ended with an agreement to give final shape to the power-sharing deal for the provincial governments and key constitutional positions.

During a meeting held at Oli's residence in Balkot on Saturday evening, the two leaders reached an understanding to split key portfolios including that of chief ministers and top constitutional positions based on the recommendation provided by a joint committee of the two left parties.

A high-level taskforce comprising of leaders from the two parties is expected to submit its report to the leaders during a joint meeting planned for Sunday.

Oli and Dahal have also agreed to develop an appropriate strategy for unification of the two left parties and are hopeful of sorting out the differences before the elections.
Talking to reporters after the meeting, Dahal said that the meeting "picked agendas for Sunday's task force meeting."

However, the meeting, which is the second one to take place since Oli returned from Bangkok, could not end the deadlock over leadership issue of the new party, according to leaders privy to the negotiation.

Maoist Spokesperson Pampha Bhusal said that the unification talks between the two parties are moving in a positive direction.

"There are some issues that need more homework, while we are inching closer to a deal on many issues," said Bhusal, who refused to divulge the details about the differences. She said that the Maoist Center is planning to hold a meeting of the party's central secretariat before Sunday's joint meeting.

Leaders said that the task force has agreed to finalize power-sharing deal based on the seats won by the parties during the parliamentary and provincial elections.
The two parties are working to wrap up the unification with 60/40 division in leadership, party organization, and other key positions.

KATHMANDU, Sept 19: A year after the promulgation of the new Constitution, the Madhes issue remains a bone of contention in... Read More...

Turkey remains in contention with 2-0 win over Czechs

LENS, France, June 22: Turkey rebounded from two losses at the European Championship to beat the Czech Republic 2-0 on... Read More...