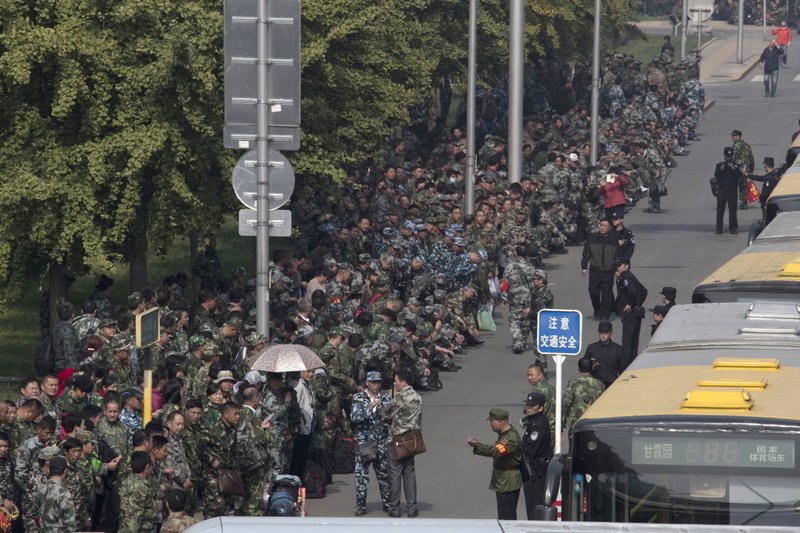 FILE - In this Tuesday, Oct. 11, 2016, file photo, hundreds of protesters in green fatigues gather outside the Chinese Ministry of National Defense to protest in Beijing. On Chinese state television broadcasts, President Xi Jinping is often shown clad in battle fatigues inspecting troops, praising their service, and hailing the People’s Liberation Army as key to the country’s rising global power. But the nationalist drumbeat rings hollow for many retired soldiers who feel left behind, and they have taken to the streets in droves to complain about having to fend for themselves with meager pensions and little support. (AP Photo/Ng Han Guan, File)

But the nationalist drumbeat rings hollow for retired soldiers who feel left behind and who have taken to the streets in droves to complain about having to fend for themselves with meager pensions and little support. The unrest poses a delicate political challenge for Xi, who has made his affinity for the military one of the pillars of his folksy image.

“It can only irritate veterans that on the one hand they hear propaganda that China is now a wealthy, powerful country that reveres its military, yet on the other hand they feel they have to fight for scraps,” said Neil Diamant, a professor of Dickinson University and expert on Chinese veteran issues.

Such grievances came to a head last week when more than 1,000 retired soldiers, including locals and many others who rushed in from around the country, descended on local government offices in the eastern city of Zhenjiang, in Jiangsu province. For four days, they occupied a public plaza and a street, singing and chanting as they demanded answers over the alleged beating of a fellow veteran by government-hired thugs after he petitioned for better benefits, supporters said.

Police cleared the square in the early hours of Sunday with relatively little violence. But scenes of paramilitary police and armored vehicles lining Zhenjiang’s streets further exacerbated the fraught relationship between the government and disgruntled veterans.

“What the Zhenjiang police did this week, clearing the scene by force, it’s illegal,” said Li Xiao, a 63-year-old former artillery soldier who drove more than 200 kilometers (120 miles) on Friday to Zhenjiang. He said he wanted to show support for the protesters from the sidelines. “History will be the judge.”

Although veterans have been petitioning for decades for improved pensions, jobs and medical care upon leaving the PLA, frustration has been bubbling in recent months. Part of the problem is that local governments are ordered by the central government to provide greater compensation and jobs for veterans but aren’t given extra funding, Diamant said.

In March, Xi oversaw the establishment of a Ministry of Veterans Affairs to address longstanding grievances, but veterans have been frustrated by the lack of substantial change. “We were delighted when the ministry was created, it was the only wish in our entire lives,” said Li. “But because of their laziness, their incompetence, they haven’t come up with a single substantial law or policy for us.”

Li’s account matched details gathered by a veteran activist from the central province of Hubei and an overseas-based activist originally from southwestern Sichuan, both of whom were in touch with protesters. The two spoke on condition of anonymity due to a fear of official retaliation.

They said the Zhenjiang protest dispersed after police entered the city square before dawn on Sunday, detained protesters and held them in empty schools until authorities from their home counties arrived to take them back.

Retired soldiers from around the country have gathered at least twice in recent months for similar protests, once in central China in June and a few weeks before that in southern Guangdong province, following reports that veterans were roughed up by government-hired thugs, according to activists. Authorities were likely alarmed when hundreds of veterans materialized in Beijing in 2016 for a sit-in in front of PLA headquarters.

The challenge to Beijing’s ability to manage this resentment is likely to continue after China announced in 2015 it would reduce the size of the armed forces by 300,000 troops and said last year it would downsize its ground forces further while investing in its ability to project power abroad.

The angry veterans, part of an estimated 57 million former military personnel in China, pose a peculiar social stability dilemma for Beijing. The veterans are generally deeply patriotic and wave red flags and banners during demonstrations. They profess loyalty to the Communist Party and admiration for Xi while directing their ire at corrupt local officials.

But Chinese leaders are wary of mass social movements and have moved quickly to squelch the unrest, further inflaming tensions among the veterans who feel betrayed. Discussion of the protest was tightly policed online this week.

Yue Gang, a retired PLA colonel and military commentator, said many older veterans have a deep-seated instinct to mobilize quickly when they feel one of their own has been mistreated. “The veterans have a lot of hope, but in reality they get a splash of cold water on their dreams.”

The protesting veterans are an uncomfortable contrast to the image Xi has touted of a resurgent China as a rising tide that will lift all boats.

For veterans like Li, who only two decades ago believed that the government would take care of him until he died, modern China can feel like a lonely place.

“I thought, after the country becomes strong and prosperous, then the people will live and work in peace,” he said. “But that hasn’t been the reality.”

Hong Kong is a special administrative region (SAR) of China. Surrounded by the South China Sea on all sides except the north,... Read More...