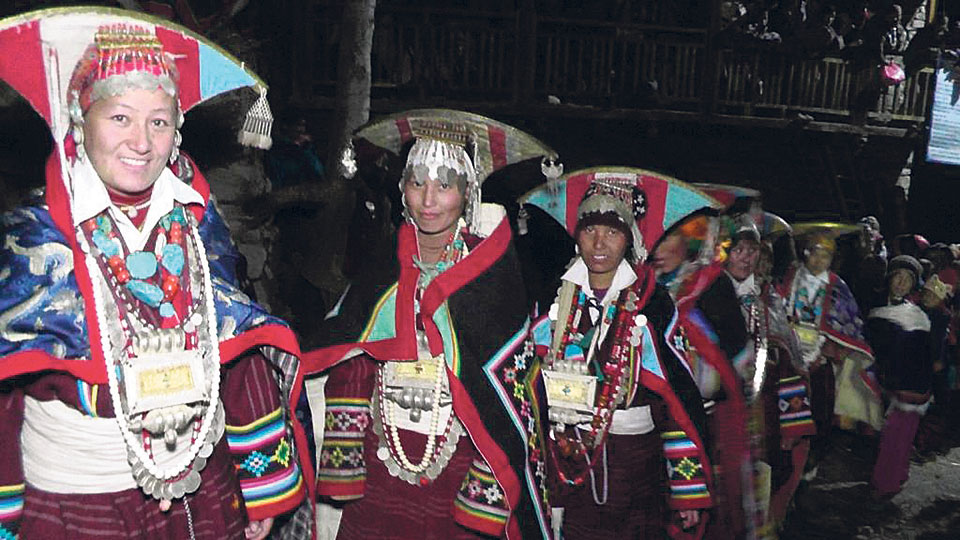 HUMLA, Feb 1: This typical festival in the mountainous district of Humla is all about worshiping deity, playing drums, dancing, singing, feasting and merrymaking. It is also about wearing unique outfits, decorations and processions. ‘Mane’, the winter festival of the Lama community of Burause village has just got over. But the thrill lives on.

“It is our indigenous culture. We involve in it from heart and soul,” said Padam Bahadur Lama, chairperson of Simikot Rural Municipality. “It is a much awaited festival here.”

The four-day festival begins on the 13th day of the waxing moon in the month of Magh according to the lunar calendar (January 28 this year) in Burause village and a day later in Simikot village. But in both places, it is celebrated with equal fervor and the same way. According to locals, this winter festival is a time for merrymaking and leisure chiefly for the farmers.

“After a few months we remain busy at  our farms. We have to cultivate crops, then we harvest. It is only after harvesting that we get free time. So, this festival is a big welcome,” said Lama.

According to him, though the festival is officially held for just four days, the celebration actually goes on for a long time. While the singing, dancing and procession take place in the four days, partying and get-together with friends and families go on for weeks.

“During the four days, we have special schedules to follow. We carry out procession in unique attire and decorations. And after that, we remain in the festive mood as we invite people at home for feast,” said Lama.

Among other delicacies, local liquor and sweets are essential during the event. Similarly, there are particular things to offer in the puja. “The puja items and Chhyang (local liquor) is given to our priest or shaman. They receive such stuffs from every home. This strengthens our brotherhood and unity,” Lama explained.

One of the most interesting facets of the festival is the group dance of the men and women. The participants should have skills to perform this dance.

“Not anyone can do this. You should know the beats and the steps. We do have some seasoned dancers here. This is a very ancient art,” Lama said.

Even though several other festivals are observed by the indigenous people of Humla, Mane is the only festival that the Lama community celebrates. That is why this festival holds such significance for this particular community.

“We do not have other major festivals. This is the only special festival for us,” Lama said. “This is the way here although Lamas elsewhere do follow other events as well,” Lama stated.

After puja (of goddess Bhawani, which in Lama language is called Bhuwani) and the rituals, the deity is offered a specially prepared ‘prasad’. Only after that, the procession is carried out where the participants get drunk and carefree.

“Ancient jewelries, handicrafts are showcased in the procession. It feels very spectacular,” Lama said. “Apart from the dances and the procession, we also engage in fun games. Everything is very beautiful about the festival. If we could well promote this, not only can this be conserved but we could also attract tourists here,” he added.