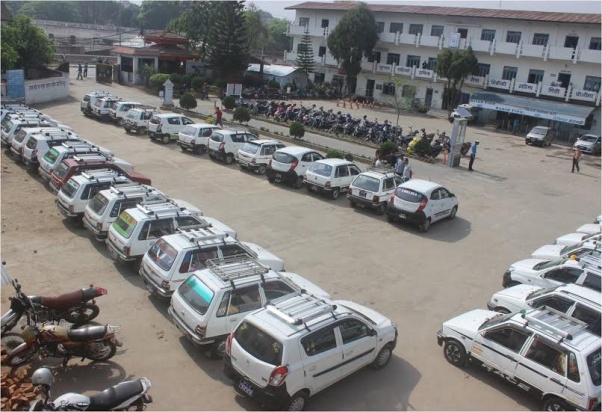 KATHMANDU, Sept 13: The Lalitpur Metropolitan City (LMC) has started efforts to bring the taxi drivers with advertisements of various companies under control and bring them under the tax net.

Metropolitan Police Chief Sitaram Hachhethu informed Republica that four taxis that did not pay tax by placing advertisements of different companies were taken under control by Lalitpur Metropolitan City on Sunday.

Before affixing commercial sponsorship stickers on vehicles, the tax has to be paid in the metropolis. However, he said that four taxis were taken under control and brought under the tax net after it was found that tax-free stickers were pasted in the taxis. “As per the legislation published in the local gazette of the metropolis to bring everyone under the tax net, the metropolis has made it mandatory to pay tax before affixing stickers of advertisements of various companies on vehicles," said Hachhethu. “It was found that the taxi with stickers had not paid the tax. As per the instructions of Mayor Chiribabu Maharjan to bring everyone under the tax net and according to the local law, we have taken them under control and made them pay taxes.”

One hundred rupees per square foot is taxed for stickers or banners placed on vehicles. According to him, all types of vehicles pasting advertisements of various companies that have not paid tax will be brought under the tax net. "We have started efforts to bring all vehicles with advertisement stickers to the tax net," he said. "For that, we will monitor all types of vehicles."

KATHMANDU, July 8: The parliamentary development and technology committee has directed the Ministry of Physical Infrastructure and Transport to make... Read More...