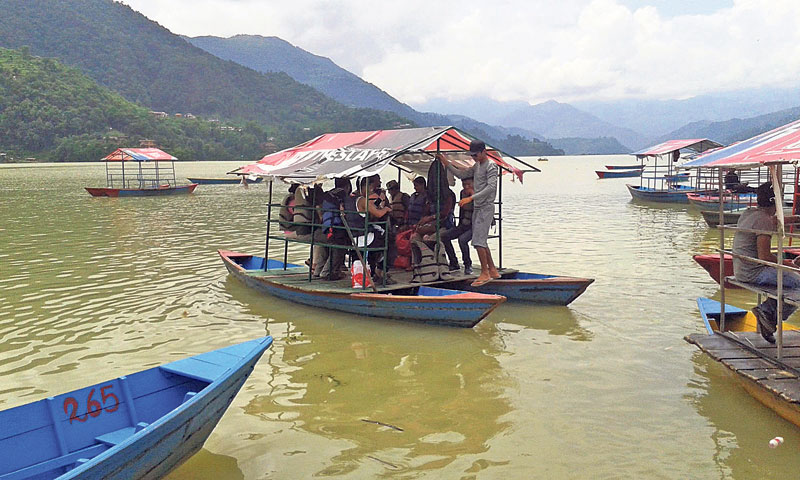 A general view of the famous Fewa lake,, Pokhara.

Lack of professional tourist guides in tourism hub Pokhara
POKHARA, Sept 8: Pokhara started welcoming tourists in 1970. Nearly half century down the line, Pokhara is among the nation's topmost tourist destinations. Millions of domestic and international tourists reach out to Pokhara and spend weeks in the city. However, sadly, Pokhara cannot yet boast of sufficient professional guides who can provide fair and reliable information about its history, heritages, religious and cultural practices and natural beauties to its tourists.

“Sounds unfair, but that's the truth. We have a dearth of professional tourist guides. Because of this, our tourists often return without knowing much about our city,” says Tikaram Sapkota, former general member of Tourism Board.

He noted that though Pokhara has taken leaps in terms of infrastructural development, this has not made any difference in the growth of professional tourist guides. “Acquiring knowledge about people and places is one of the major thrills of traveling. We have not been able to offer this experience to our guests in the real sense. And this reality is dawning upon us as we prepare to celebrate 50 years of tourism in Pokhara,” he noted.

Som Bahadur Thapa, president of Pokhara Tourism Council also expressed similar concerns. At a time when thousands of Nepalis hunt for job abroad, this could be a good career option. Yet, youths and organizations have not focused their attention to the area, Thapa opined, urging stakeholders to focus on it.

Both Sapkota and Thapa admit that the tourism promotion board and entrepreneurs have not been playing a constructive role in fulfilling this lack. The duo feels that not being able to prepare suitable guides for the city even in around 50 years of long history of tourism in the city and moving on with scarcity of professional guides is in fact, an embarrassing matter for the tourism industry.

“We do not have well trained human resource that can serve the depth of natural, religious, cultural aspects of Pokhara to our guests. We have scarcity of tourist guides who had in-depth knowledge of our lakes, birds, flora and faunas found in Pokhara. Human resources that have this knowledge are essential for selling Pokhara's richness to the world,” Thapa said.

“Most of our guides are basically trained for delivering better trekking experience to tourists. As Pokhara was used as a base for trekkers in the earlier days, guides were focused on providing trekking guidance to tourists. But through the decades Pokhara in itself has developed as a tourist city. However, most of the guides still are focused on trekking,” Sapkota said. “While focusing their services for trekkers, industry stakeholders have been missing out on selling the town itself to the tourists. We are rich in cultural, social and natural heritages, but these remain ignored. Serious studies in these areas have never been conducted, because of which we have been not able to exploit our full tourism potential.”

Sapkota said that ignorance about own heritages points to lack of historian that could document them and added that the lack has deprived residents and tourists from knowing Pokhara's history, culture and natural resources.

Substantiating his claims, he said that if a guide cannot tell history and religious and cultural significance of the Barahi temple to the tourist, than the tourist wont be remembering the place. “Some tourists are interested in knowing cultural and religious significance of a temple and its deity. But if the guide, who is fluent in many international languages, cannot provide such information, than there is now way for the tourist to know them.”

The dearth of tourist guides has directly affected the stay duration of the tourists. “If we are able to provide in-depth details of resources than that would trigger their interests and that would provide them with a cause to prolong their stay here,” he opined that Thapa also seconded.

“Development of tourism sector largely depends on tourist guides. Many tourists love to come back to the place and learn more if they're interested in the historical, cultural, religious significance of that place. But we hardly have such impressive guides around,” Thapa remarked.

He said that tourist guide turned taxi drivers have been mostly providing service in the city and claimed this practice has adversely affected the industry. “Taxi drivers become tourist guides after initially building confidence on the basis of their encounters with some tourists. But as they lack formal training, they hurry up their tours,” he said adding that a professional tour guide takes time to share details about a location to the tourist, sticks to tour itinerary and ensures the tourist gets all the information that he has come looking for.

Uday Bhattarai, chief of Tourism Development Board, Pokhara also stressed on producing guides that are sensitive to human being and have fair knowledge about the area and imbibe in them the zeal to share their knowledge with others.

“This is a very sensitive profession. Tourist guides are primary means through which a tourist perceives a place, its resident or cultural practices and forms an opinion. It is important that a tourist guides is sensitive to such issues, is knowledgeable and treats tourists humanely,” Bhattarai said calling on the tourism sector stakeholders for investing in producing such tourist guides.

A group of tourists pose for a photo in Pokhara.

URLABARI (Morang) Jan 31: The Mangalbare Hospital based at Urlabari of Morang is facing an acute shortage of post-rabies exposure... Read More...

KATHMANDU, Sept 11: The General Convention of Tarun Dal, the youth wing of Nepali Congress (NC), will be held from... Read More...