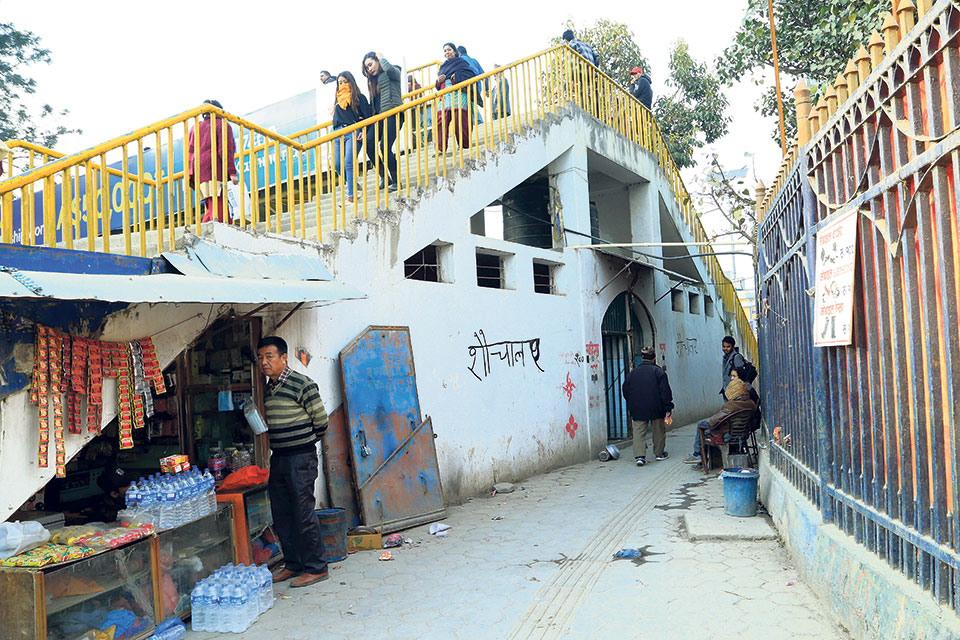 KATHMANDU, July 5: Over 40 new 'smart' public toilets are to be built across Kathmandu by the end of the upcoming fiscal year, while those currently in operation will get a facelift, according to Kathmandu Metropolitan City (KMC) office. The KMC has allocated around Rs 100 million for the project, and already finalized the designs of the toilets.

“The new toilets could accommodate somewhere between 50-500 users under any given time. There will be separate sections for men and women and the toilets will be accessible for differently-abled users as well,'' said Saroj Basnet, vice chair of the KMC's planning unit.

The toilets, which would be part of KMC's much ambitious project called Kathmandu Beautification Drive, has been described as a much-needed measure to resolve the capital city's toilet problem.

Kathmandu, a city of around 2.5 million people, has far less toilets compared to two decades ago when it used to host less than a third of the population. Little over a dozen toilets in KMC are in operation, many of them hardly fit for use.

“Although we have around 50 toilets, only 12-15 toilets are under in use. The remaining are either unfit for use or have been closed,'' said Ishwar Man Dangol, KMC spokesman.

KMC officials said they are currently working to identify appropriate locations for building the new toilets. Almost all public toilets currently in use in Kathmandu are not disabled-friendly, according to the National Federation of Disabled.

Most of the toilets, which will be built in phases, would be located in areas with greater flow of public. The areas identified so far include New Road, Kalimati, New Buspark, Gaushala, Tinkune, Koteshwar, Thapathali, Tripureshwar, Sundhara, Lainchaur, Sorhakhutte, NAC (New Road), Jamal and Balkhu.

Experts and stakeholders say the new toilets would certainly provide a great relief for general public but would still be far from enough to address Kathmandu's poop crisis.

According to Department of Water Supply and Sewerage, a total of 1,309 households in Kathmandu district still lack toilet at home. This together with tens of thousands of homeless people, squatters and migrants have left KMC and other authorities with daunting task to turn the city into a truly open defecation free zone.

"KMC will set up a committee in every ward to investigate the condition of public toilets and work to improve the existing public toilets,” said Khadgi. In the report, Khadgi's panel has mentioned that around 300 toilets need to be built in the city. It had also recommended collaborating with shopping malls, fuel stations and other private business to improve people's access to toilets.

Moreover, there are still bigger questions regarding the management of toilets. Stakeholders point to several issues in the way the public toilets are being operated. KMC has been operating public toilets in collaboration with private firms, which are responsible for the operation, maintenance and supervision. KMC's own investigation found that these private operators were spending precious little toward hygiene and maintenance despite making good money.

“The shortage of toilet together with poor hygiene could easily trigger a health crisis. The residents of Kathmandu face risk of various communicable diseases like diarrhea, dysentery and round worm infection,” Dr Samir Kumar Adhikari of the Epidemiology and Disease Control Division under the Ministry of Health, told Republica in a recent interview.