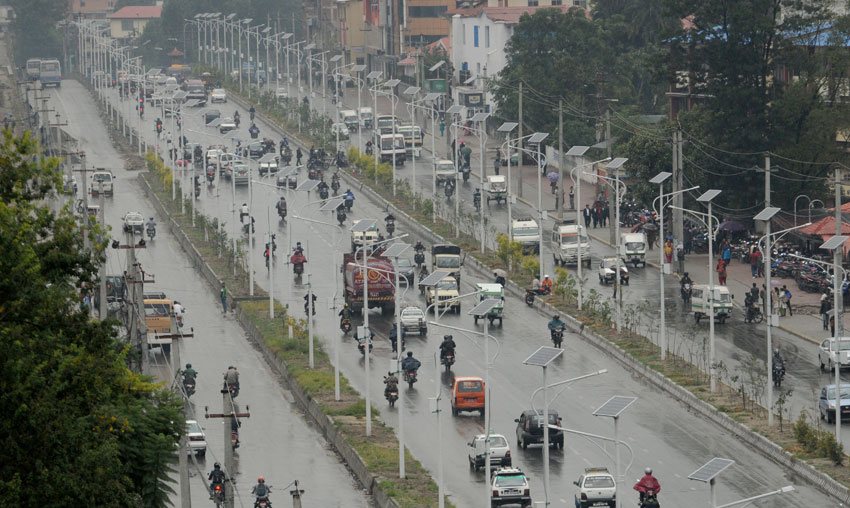 KATHMANDU, June 23: The major streets, thoroughfares and road sections in the Kathmandu Valley will be illuminated by the solar street lamps in a year and a half, according to the Kathmandu Metropolitan City (KMC).

The KMC is all set to install as many as 1,085 solar-powered lamps under the public private partnership, shared KMC Public Private Partnership Chief Shiva Adhikari.

A tender in this connection has been called where more than 20 companies have applied so far, Adhikari added. The deadline for tender submission is June 26.

The street and roads in the Kathmandu Valley have been divided into three sections for the installation of such lamps on major streets, thoroughfare and roads.

In the first phase, 400 poles will be installed in the road section stretching from Kalanki-Maitighar-Keshar Mahal Chowk-Thamel-Chettrapati-Sohrakhutte –Balaju to New Bus Park, according to KMC.

Similarly, 300 poles will be installed along side Durbarmarg-Kathmandu Plaza- Krishna Pauroti-Gaushala road section in the second phase.

Likewise, 385 poles will be erected in the third phase which comprises road section from Old Baneshwar-Ratna Rajya School Area-Sankhamul Bridge-Tinkune-Koteshwar-Narefaant-Bhimsengola-Sinamangal.

Many of the solar street lamps installed by the Nepal Electricity Authority during the 18th SAARC Summit in November, 2014 are out of order due to lack of maintenance. RSS

50,000 street lamps to be replaced by solar lights in current fiscal year

KATHMANDU, Jan 4: The Ministry of Federal Affairs and Local Development has allocated budget to various municipalities across the country... Read More...

KATHMANDU, Aug 13: Three districts in the Kathmandu Valley have reported as many as 127 new cases of the novel... Read More...

KATHMANDU, July 25: The Metropolitan Traffic Police Division (MTPD) has collected revenue of Rs 310.56 million in a fine from... Read More...