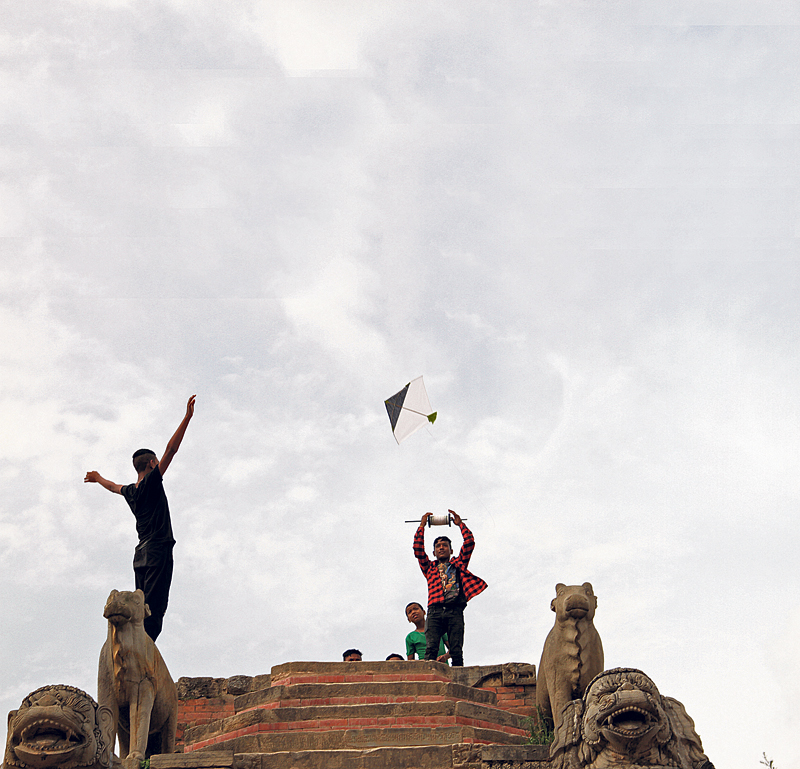 KATHMANDU, Oct 7: Bhaktapur is still recovering from the damages of the 2015 Earthquake but Dashain’s festive mood is still intact at this historical town.

Here, the local kids are scurrying around the ruins with their kites and lattai (string spool). And the older folks are gazing at the sky waiting for the crucial moment when a kite gets cut from its string.

This popular Dashain pastime of flying kites has grown into a culture. When we think of Dashain, we imagine the clear blue October sky dotted with kites of different colors and the happy faces of kids contesting in kite flying. But in recent times, only few people from the newer generation are interested in continuing this cultural legacy while the older generation still reminisces about their bygone kite flying days.

“I enjoy flying kites and equally enjoy watching kite flying,” says Ram Sunder Bhele from Suryabinayak, who is getting his fourth grader son new strings for his lattai. “A high flying kite instantly elates your mood.”

Bhele remembers Dashain when he was a kid. He used to tail his father around town when kites ruled Bhaktapur’s sky. He notes that he’d spend Dashain doing nothing but flying kites. “Now I’m tailing my son. As I launch the kite up, he expertly winds the string on the lattai,” he says.

Like Bhele, there are many locals who become nostalgic about their childhood seeing the young kids with their kites. 66-year-old Bal Gopal Prajapati says, “In our times, we used to get kites for just two paisa. When I watch the little ones flying their kites, I’m transported to that era. But nowadays, I’ve noticed that people are losing interest in kites.”

82-year-old culture expert Tejeshwar Babu Gwanga reveals that he has a childhood fixation with flying kites. Just four years ago, you could find him at his terrace diplaying his kite flying skills. “Whenever I was flying kites, it felt as if I was flying,” he says.

Gwanga notes that there are many legends associated to the origination of kite flying culture during Dashain. “People wanted the monsoon to stop so they started flying kites as a form of prayer to Lord Indra, the God of rain, to keep the dark clouds away,” he says.

Others like Dipendra Prajapati, a Bhaktapur local, think that children can learn important life lessons from kites. “Even in unpredictable conditions, the kites rise up. Kids can take this as an inspiration to keep on moving forward when the situation is against you,” he says.

While Damodar Suwal believes that a cut-off kite metaphorically represents a delinquent child, out of the control of his/her parents. “It’s not only about flying,” he says. “It’s more about self-control and discipline.”

“If you look closely enough, you will see that it’s very easy to find and read stories around us,” says... Read More...

Homework or kites? Caught in a catch-22 situation

Dashain is already at our doorstep and the festival vibe has taken over the city. Many people have started packing... Read More...

Powerful stories from around the world in Kathmandu

What will South Asia look like after the pandemic?
4 hours ago