Kiran and Nangsal declared best players of the year 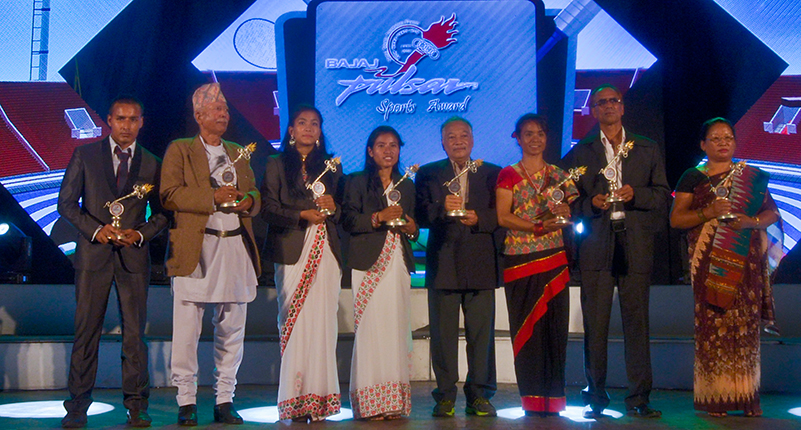 Limbu’s award was received by his mother as national team goalie is in Maldives to play professional football.

Likewise, Tamang surpassed the competition from Archery’s Gyanu Awale, athletics’ Kanchi Maya Koju and Saraswati Bhattarai alongside the football’s Sabitra Bhandari to win the Female Player of the Year award.

Winner Tamang dedicated her award towards her family and coaching team. “I was nominated for this award couple of years back, but this time I have finally bagged it,” said Tamang. “I want to dedicate this award to everyone including my family, coaching team, Nepal Badminton Association and Citizens Bank who have helped me through my career.”

The 14th edition of the NSJF Pulsar Award organized to honor the sports personalities on the basis of their performance and contributions at national and international arena for Nepal in the year of 2073 BS, saw Pushpa Raj Ojha and Manita Shrestha Pradhan winning Coach of the Year and Youth Player of the Year awards.

After receiving the award, Athletics’ Ojha said that his contribution towards the sport during his long career was now recognized. “With this award, I feel that my work has got proper recognition. I wouldn’t have gotten this award if my players hadn’t achieved success. So I want to thank them,” said Ojha. Football’s Gytoku Koji and Megh Raj KC, cricket’s Jagat Tamatta and badminton’s Kiran Thapa were other nominees in the Coach of the Year category.

Judoka Manita Shrestha Pradhan said that the award would help her to do well in future. “I am more encouraged and determined after winning this award and will keep on being disciplined to win more,” said Pradhan.  Cricketer Dipendra Singh Airee, footballer Ananta Tamang, lifter Kamala Shrestha and volleyball’s Pratibha Mali were other nominees in the Youth Player of the Year category.

Likewise athlete Kanchi Maya Koju won the People’s Choice award which was declared on the basis of the SMS votes and Facbook likes.

On the same occasion national men’s volleyball team was honored with team of the year award.
The winners in Male and Female Player of the Year alongside Coach of the Year and People’s Choice were rewarded with Pulsar Motorcycle and a purse of Rs 50,000. Likewise, honored sports personalities in the remaining categories were awarded with Rs 50,000 case prize.