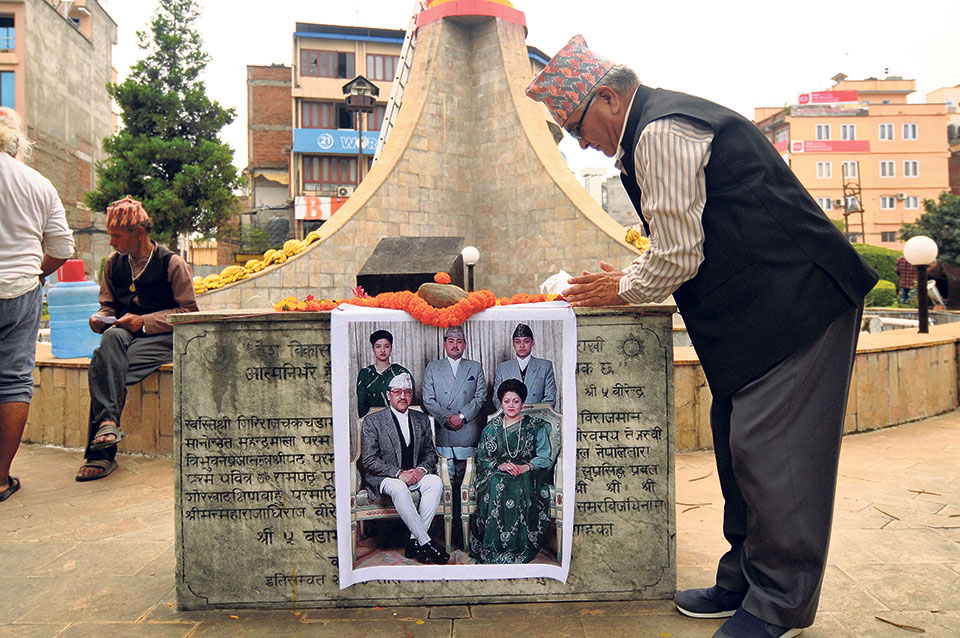 A man in Jawalakhel, Lalitpur paying tribute on Saturday to the late King Birendra Bir Bikran Shah and his family who were massacred on this day Jestha 19, seventeen years ago. Photo: Bijaya Rai/Republica

KATHMANDU, June 3: On Saturday, the country marked 17 years of the royal palace massacre of 2001 in which it lost the then King Birendra Shah, Queen Aishwarya and Crown Prince Dipendra.

Although a high level investigation panel report concludes that a drunken crown prince Dipendra opened fire at the royal family before shooting himself over disputes on his marriage proposal, many still question the report. For many the royal massacre which ended the bloodline of the royal family taking lives of 10 royal family members is still a mystery.

There was a strong demand for re-probing the massacre and first prime minister after the declaration of republic in the country, Pushpa Kamal Dahal, promised to probe the case yet again opening the Narayanhiti Royal Palace as museum in 2009.

The demand for another probe into the royal massacre has faded now, but the general people, political leaders and kith and kin of the royal family still recall the late King Birendra as a humble, polite and friendly king and June 1 as a black day in Nepal's history.

Chairman of the Rastriya Prajatantra Party (RPP) and former Foreign Minister Kamal Thapa tweeted paying tribute to the royal family and praising King Birendra as 'being alive inside the hearts and minds of the Nepali people'. Thapa's pro-royalist party still commemorates the birth anniversary of the late King holding different programs.

Though the government, political parties or their unions do not hold any function to in memory of the massacre, politicians, social activists and other citizens recalled the king as 'beloved' and most respected.

Binoj Basnyat tweeted on Saturday posting few photos of King Birendra's family “To be a surrealist means barring all remembrance of what you have adored and loved. Griefs of Jestha 19 seventeen years ago start to become indulgent; if it is not transformed to remembrance, respect and love to our royals we lost.”

A soiled photograph of the royal family still hanging on the wreckage wall of the quake damaged building was widely shared on social media on Saturday. “Your (Birendra) photo is still hanging on the wall of our house, our grandparents still recall that there hasn't been a king like you,” Sagar Sharma tweeted sharing the same photo.

Similarly, social activist Hima Bista also hailed the princess and prince as humble personalities posting their photo from the web archive. “Today is the day I mourn the loss of these beautiful souls. Princess Shruti and Prince Nirajan. Born as royalties but mixed with everyone without any boundaries. Lived by examples,” she tweeted a photo.

Spokesperson for the RPP, Mohan Shrestha said that the royal massacre changed the course of Nepali politics. “Nepal would perhaps have remained a kingdom if King Birendra had not been killed,” he said.

Like me on time to judge, shine, A profound glory,  Memory remains. ... Read More...