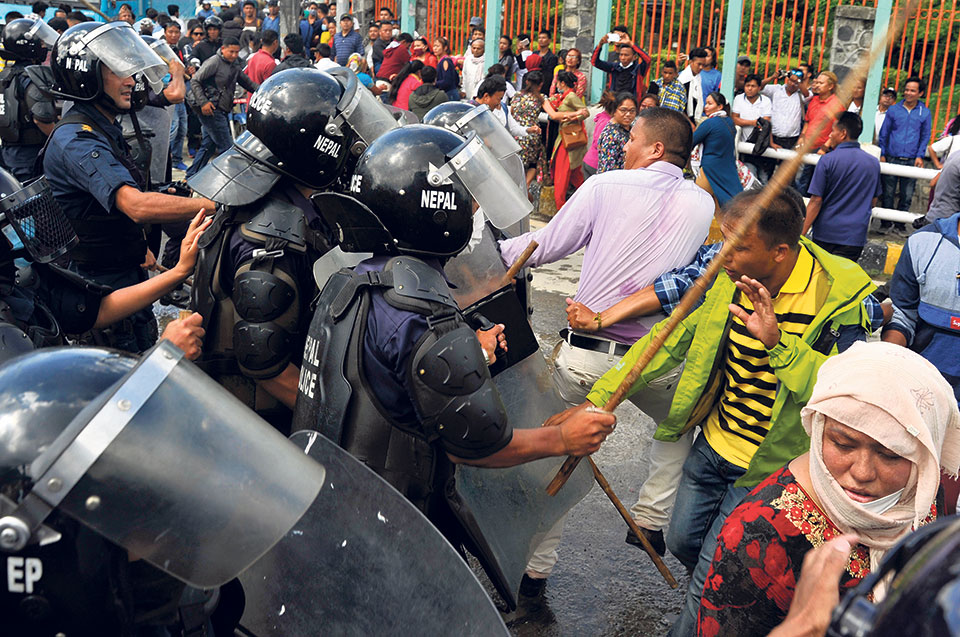 Police use batons on the demonstrators who staged demonstration at Metropolitan Police Circle in Gaushala, Kathmandu on Sunday demanding justice for Bimala Tamang, a worker at Samata Hospital who was found hanging at the hospital last week. Although post mortem report stated that Tamang had committed suicide, the kin claim that she was murdered. Photo: Keshab Thoker/Republica

KATHMANDU, June 24: Kin of Bimala Tamang who was found hanging inside one of the rooms of Samata Hospital in the capital last Tuesday staged a demonstration outside the Metropolitan Police Circle, Gaushala on Sunday demanding fair probe into the case. The post-mortem report has stated suicide as the cause of death while the relatives of the deceased claim that she was murdered.

The protest which began at around 1 pm finally ended after Deputy Superintendent of Police (DSP) Pradeep Kumar Singh, chief of the police circle, held discussions with the relatives of the deceased at around 4:30 pm.

Police had to resort to baton charging on the protestors after tensions flared up outside the police office. Two of the relatives of the deceased, Gautam Ghising and Sanraj Yonjan, were detained by police in their attempt to bring the situation under control. They were set free after both the parties agreed to talks.

“It was only after the protest that the police assured us to carry out investigation into the case. We have filed a case along with the name of the culprit,” said deceased Bimala’s husband Buddhiraj Tamang who claimed that his wife was murdered.

One of the relatives of the deceased, Roj Bahadur Moktan, stated that the protest was staged to demand a fair investigation into the incident.

“The investigation is moving ahead at a ridiculously slow pace and with the passing of time there is high possibility that the culprits will be protected,” he told Republica, “We have been demanding fair probe into the incident which will eventually help deliver justice to Bimala.”

DSP Singh informed that investigation into the case is underway. “Three people whose names have been mentioned in the note collected from the dead body are being interrogated,” he informed Republica, “Since the crowd was growing out of control we had to charge batons and detain two of the protestors.”

Bimala Tamang, 27, of Doramba, Ramechhap, who was working as a cleaning staffer Samata Hospital, was found hanging in one of the hospital rooms on Tuesday morning.

KATHMANDU, June 22: On Monday evening at around 7:32 pm, Buddhiraj Tamang's phone rang. The call went unnoticed as he... Read More...

Demonstration in Arghakhanchi for integrated Province 5

ARGHAKHANCHI, Nov 29: Students and political leaders have hit the streets in the district calling for an integrated Province -5. Read More...