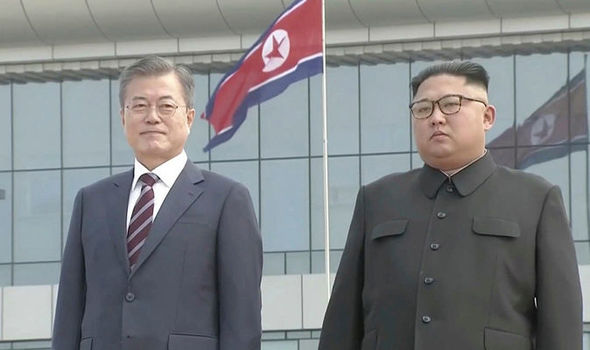 Moon and Kim hugged as they met for the third summit this year. Moon was greeted by a North Korean military ceremonial guard and military honor guards, among cheers by Pyongyang citizens waving flowers and flags.

Moon and Kim will have their first summit talk in the afternoon, followed by a welcoming art performance and dinner.

Moon said before he departs to Pyongyang that his visit will be a great success if he could help talks between the U.S. and North Korea resume, according to a presidential secretary for public relations Yoon Young-chan at a briefing on Tuesday in Seoul.

"If my visit to North Korea resumes the U.S.-North Korea talks, that would be meaningful," Moon was quoted as saying.

Moon and Kim were also seen stepping off the same vehicle to arrive Baekhwawon State Guesthouse, where Moon will stay during the summit, ahead of luncheon.

The two leaders will hold talks on Tuesday and Wednesday to discuss ways to advance inter-Korean relations and ease military tensions on the Korean peninsula.

Moon is also tasked with a difficult mission to revive the stalled nuclear talks between Washington and Pyongyang.

"Moon will play a role of a mediator and facilitator to deliver thoughts of the United States to North Korea and vice versa," said Im Jong-seok, Moon's chief presidential secretary at a briefing in Seoul on Monday.

KP Oli thinks he is a king: Dahal
17 minutes ago