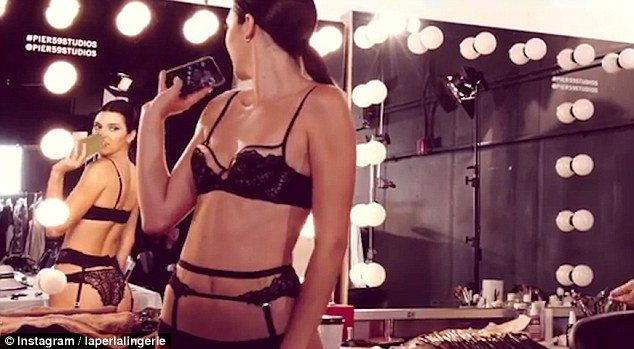 WASHINGTON DC, Nov 13: Must be the right season for supermodels like Kendall Jenner, Liu Wen, Isabella Fontana and many others, who are having some quality photo shoot with a sexy twist.

The 21-year-old American fashion model stripped down for the 2017's spring/summer advertising campaign of an Italian lingerie campaign 'La Perla.'

In the recent videos and photos posted on the company's Instagram account, the trio showed off their sexy, lingerie-clad physiques.

"Backstage action with @kendalljenner on set of the new #LaPerlaSS17 advertising campaign. #LaPerlaLiberation," read the caption alongside the clip that shows Jenner sporting a black lingerie set and slicked-back hair, leaving little to the imagination.

In a follow-up post, Chinese supermodel Liu Wen is seen grooming up for the campaign.

The caption read, "Take a look at the #LaPerlaSS17 backstage with @liuwenlw during the making of our latest advertising campaign. #LaPerlaLiberation."

'La Perla' preceded these posts with Brazilian model Isabella Fontana clad in a high rise piece sexily posing for the cameras adding her provocative allure to the new collection.

Harry Styles back with Kendall Jenner